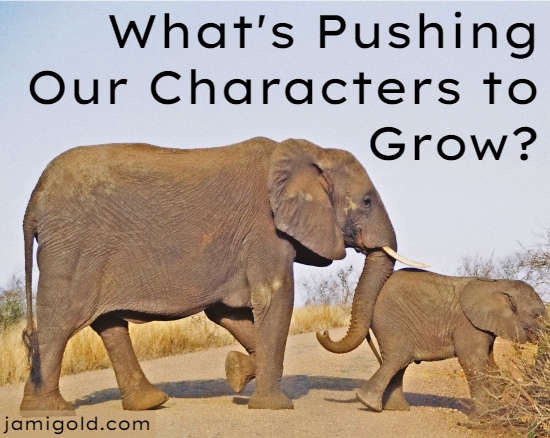 I’ve been having a lot of fun preparing the mini-ebook-style handout for my upcoming Romance Beat Sheet workshop. The handouts for my classes are often a brain dump of tons of information, and this workshop is no exception.

One section of the handout is about our characters’ arcs, focusing on Michael Hauge’s teachings about Identity and Essence. Those who have studied Michael’s explanation know there are a lot of elements to juggle. Our characters start with four aspects of their Identity, and then something makes them change and progress in their internal journey.

But what is that something? Let’s take a closer look at what triggers our characters to make internal changes in their lives. *smile*

Why Is Our Story Happening Now?

If we write our story linearly, one of the first things we need to decide is the when and why of our story beginning. When do we think our story starts and why?

From the plot arc perspective, we can ask ourselves questions like:

In other words, there’s some reason why the story happens now and not last year or next year. Plot events are often the key. Those plot events provide a trigger that will force our protagonist to get involved in the story problem.

Once we know our story’s trigger, we’ll have a better idea of what our first scenes should be. We wouldn’t open our story with scenes of their boring job at the office unless something happens there that directly leads to the trigger point (Inciting Incident).

Why Is Our Character Changing Now?

Similarly, with a character arc, we need a trigger for why our character begins changing. Even with a “simple” character arc (as opposed to an Identity-to-Essence journey), such as our protagonist deciding to give up drinking, there needs to be a reason why they’re making the effort to change now rather than last year or putting it off until next week.

With a character arc, we can ask ourselves questions like:

In other words, character arc triggers could be other characters, situations, or plot events. Whatever the specifics, the trigger forces our protagonist to start their attempt to internally change because “they can’t get there (an external or internal goal) from here.”

Why Does Our Story Need Character Arc Triggers?

In our own lives, we know that change is hard. We know we should exercise more, not take others for granted, or whatever. But bad habits and inertia to keep doing what we’re doing hold us in place.

As Kristen Lamb said in her guest post about scene antagonists a few years ago:

“Most real people are not self-aware enough to realize they have problems. In fact most real people spend years in therapy to come to the realization that they might actually be responsible for their own problems. Most real people do not wake up one day and say, “Wow. You know. I think today I am going to change.”

Real people need some outside event or person to create discomfort that makes us change:

What Pushes Our Character Along the Journey?

Just as rising stakes in our plot arc keep our character involved in the story problem despite the obstacles, something keeps our character trying to internally change—despite the fact that “change is hard” and they have setbacks and fail.

Change is hard, so what's pushing our characters to grow? Click To TweetMaybe emotional stakes keep rising too, like their fear of failure. Or maybe an antagonist pushing them to change is right next to them throughout their character-arc journey, challenging or threatening or helping. Or maybe plot events offer constant reminders of the importance of change. Or maybe their “temporary fix” isn’t enough.

Because change is so hard, our protagonist will often experience a two-steps-forward-one-step-back zigzag of progress. But something will help them make some progress.

The Shift from Reactive to Proactive

Around the Midpoint of our story, our character will often shift from being reactive to the option of change (such as others forcing them or thinking a temporary fix will do the trick) to being proactive or consciously accepting of their need to change. They’ve made enough progress by this point to get a glimpse of how much better off they’d be if they succeed with their arc.

In Michael Hauge’s teachings about our characters’ Identity and Essence, after the Midpoint, our protagonist might start to question their False Belief, or the emotional armor of their Identity might not fit as well, chafing a bit as they begin to glimpse their Essence. The fear of not reaching the potential of their Essence might even start to compete with and overcome their fear left over from their Backstory Wound.

Once a character suspects that there might not be a “normal” to get back to, they can push themselves more. They might continue on their own with their progress—at least until the failure of the Black Moment.

From Failure to Success

After they give up at the Black Moment, our character once again needs a trigger to force them to not give up. Maybe the stakes (consequences of failure) were worse than they expected. Maybe another character is there to call them out for failing to truly commit. Or maybe their attempt to return to their previous “normal” fails completely.

Somewhere between this point and the Climax of our story, our protagonist makes a leap of faith to take responsibility for every aspect of their story—plot arc and character arc. They’re no longer hoping to get back to their previous “normal.”

During the Climax, our protagonist proves that their change is real. They’re faced once again with the temptation and/or opportunity to give up, and this time, they remain successful. *smile*

In a romance story, where we have two protagonists and two character arcs, each protagonist is often a trigger for the other to change themselves. Partly that’s because a good romance should show the characters connecting better when they’re being true to themselves and their potential.

But the other reason is that the characters are together enough that they each see the other’s potential and call them on their failures to live up to it. Romance protagonists are especially good at challenging and helping the other in their journey.

In romance stories, how can we coordinate both characters' internal arcs? Click To TweetBut if we’re using Michael Hauge’s ideas of Identity and Essence, it can be hard to keep track of all the ways our protagonists connect and push and change. Unfortunately, one of the best resources I’ve seen for ensuring our romance protagonists go through a character arc that also connects to the romance arc hasn’t been available for a while.

Eight years ago, author Autumn MacArthur created an Identity-to-Essence worksheet for romance, which specified how our romance protagonists connect and challenge each other. But after her site’s redesign a few years ago, Autumn no longer offers the worksheet as a resource on her site. Luckily, she’s also given permission for others to adapt and share her worksheet, and I’d grabbed a copy before her site changed. *grin*

I’ve slightly updated Autumn’s original worksheet, changing the formatting for easier printing and completion. I also tweaked the wording on the worksheet to be more inclusive of LGBTQ+ romances.

The terms, definitions, and the whole Identity-to-Essence journey come from Michael Hauge. But hopefully this format of organizing the information might help us figure out our characters’ arcs and see how we can develop their transformations in a romance. 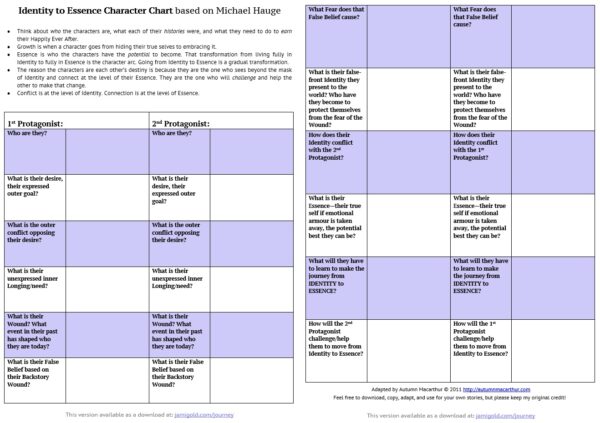 Whenever I offer a workshop and discover cool things to teach, I always want to share my work with all of you. So I struggle to provide something special to my students to make the class worthwhile and also do something for my readers. (I like being helpful…on a near pathological level. *snicker*)

Years ago, I shared my Romance Beat Sheet to make up for everything else I couldn’t share from my Lost Your Pants? workshop. Now with my new Between the Sheets workshop, I’m glad I have the opportunity to share with all of you this previously unavailable resource Autumn developed from Michael Hauge’s concepts. I hope it helps us develop stronger connections between our romance characters.

*psst* If you write romance and enjoyed this in-depth look at character arcs, check out my Between the Sheets: Create a Deeper Romance with the Romance Beat Sheet workshop. There’s a lot more where this came from. *grin*

Do you include character arcs in your stories? Do your characters have reasons for making the hard internal changes? Have you thought about what triggers and pushes your character throughout your story? If you follow Michael Hauge’s Identity and Essence and write romance, do you think this worksheet will be helpful? Do you have any questions about character arcs?