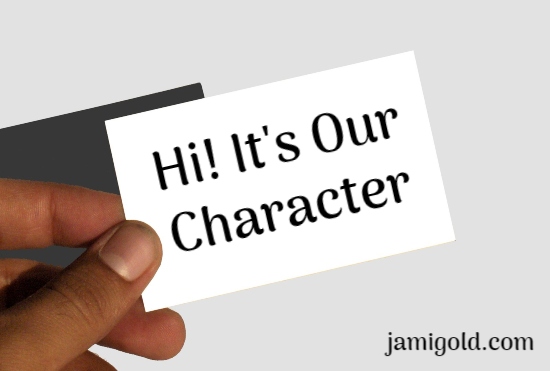 Last time, we started tackling the tricky problem of how to introduce our characters to readers, both with a post here and with my latest post at Angela Ackerman and Becca Puglisi’s Writers Helping Writers site. But as I’ve mentioned before, my posts at WHW are limited in word count (and if you know the length of my usual posts, that means I cut a lot of information *grin*), so let’s dig deeper today.

How Can We Fix Wrong Impressions?
3 Problems & 3 Tips

If we introduce our characters by showing them acting or behaving out of character, readers have no way of knowing that’s not their usual way of dealing with situations, and they’ll judge our characters accordingly. As we explored last time, this situation can work against us even if readers know why our characters are behaving as they do.

The key isn’t just to help readers understand the what of events triggering their behavior. Readers also have to understand how our characters feel about not just the events but also about their out-of-character actions.

Let’s go back to the example in my last post of a character sniping at their coworkers because they’re having a bad day, starting with their car breaking down on their way to work. As I mentioned, that type of behavior could give readers a bad impression of our character, or at best, would give readers an impression about the premise of our story that might not line up with our intentions.

However, what if we let readers in on how our character felt about their out-of-character behavior? What if their point of view included their self-chastising internal monologue? Or included information about how they recognize they’re “acting out” due to feeling extra vulnerable and will need to apologize and make amends later? Or whatever?

TIP #1: If our introductory scene includes out-of-character behaviors, we might want to let readers know the why behind their behavior—and how that explanation affects our character.

Many a romance novel introduces a hero who acts like a jerk. How do those writers “get away with” showing their character in such a bad light to readers?

While some readers enjoy “alpha-hole” characters, a wider range of readers enjoy these stories when they give the character a reason for acting that way. For example, the hero in those stories often thinks they’re doing what they must to take care of their family, employees, friends, etc. In other words, if our character needs to act in a way that doesn’t show them in a good light, yet we want readers to come away with a good impression, we want to make readers understand our character’s motivations for their behavior.

In the WHW-guest-post portion of this topic, I gave the example of the opening scene in my novel Treasured Claim, which showed my heroine preparing to steal—er, acquire jewelry. Obviously, that behavior could make her unlikable to many readers, so I revised to include her motivation: If she didn’t steal jewelry, she would die. Including that context for how the character was vulnerable helped readers connect to her despite her “bad” behavior.

TIP #2: If our introductory scene includes “bad” character behaviors, we might want to let readers know the character’s motivations—and their flaws, fears, or vulnerabilities that make those motivations matter to them.

At the other end of the scale, our characters might seem boring in their introduction, which isn’t good for keeping readers on our characters’ side either. In this case, the root cause addressed above means that readers don’t know our characters’ potential to be “better”—or at least more interesting.

Several years ago, I wrote about the many weak and/or cliché types of first pages and why they so often don’t work. The issue with many of those techniques—from looking in a mirror to just waking up—is that they don’t show our character in action or presented with a problem or anything that demonstrates there’s a story waiting for our readers. We need the events on our first page to matter to our character.

What are 4 problems we can run into when introducing our character (and how can we FIX them)? Click To TweetThe exceptions that make the clichés work succeed in showing how the events matter. For example, in Hunger Games, Katniss wakes up, but with her sister gone from the bed next to her, readers are immediately shown a problem that makes the character concerned. And the first step to engaging reader emotions is to show the character’s emotions.

Likewise, in Divergent, Tris stands in front of a mirror, but the rest of the first paragraph presents readers with a question, as they learn she’s only allowed in front of a mirror once every few months. Why? That gap between what readers know and what they want to know pulls them into the following paragraphs where they learn of her worries.

With both of those examples, the events on the page aren’t about the character waking up or looking in a mirror. The events are about revealing actions, problems, and emotions. The events matter beyond just the cliché and are meaningful to the characters and the overall story.

At the same time, making events matter to our characters increases the stakes. Stakes are low when nothing matters or the characters themselves don’t have a reason to care about events. But when events have consequences—even if small and personal—characters will care, and that will help readers care.

TIP #3: If our introductory scene includes boring actions, we might want to let readers know why these events matter to the characters—and how they relate to our characters’ initial problems or worries (and the consequences of them).

How Should We Start Our Character’s Arc?
1 Bonus Tip

All those problems and tips above address issues with how our character and their situation is portrayed in the first scene. But there’s another aspect for us to consider, and that has to do with what I mentioned last time about character arcs.

Arcs are about change, and unless we’re writing a very plot-heavy story that doesn’t include a character arc for our protagonist, our main character will usually go through an emotional journey. Their internal change can manifest in several ways:

With any arc, there’s a beginning and an ending. The ending requires readers to feel a sense of closure, and the beginning sets up the Point A before the change takes place. So we might want our character introduction to give readers a sense that an internal journey is coming.

How do we do that? We could allude to one of those three bullet point journeys above or to our story’s theme.

How can we kick off our character's internal arc on the right note? Click To TweetFor example, if our character will learn something about the world, we can show their current beliefs but hint at how they might be wrong. Or if they’re going to be able to do something they could never do before, we might show how they’re currently holding themselves back or sabotaging themselves.

We might hint at a longing (love, respect, etc.), an internal need (justice, truth, etc.), or a character flaw to overcome. In many romance stories, the character might think “if only” or “yeah, right” at the idea of a relationship.

For example, my Treasured Claim story opens by showing what the heroine is desperate enough to do to survive. By the end of the story, she’s making different choices when faced with questions of survival because she’s changed in her beliefs, priorities, and emotions. With that ending, it’s clear how her very first introductory scene sets the stage for the Point A of her journey.

Tip #4: If our story includes a character arc, we might want to use the character’s introductory scenes to establish their Point A and hint at the journey they’ll face throughout the story.

Have you read stories that do a poor job of introducing the protagonist? Do the problems you saw encompass any of the issues identified here? Or can you think of other issues causing bad introductions? Do these tips help give you ideas for how to introduce your characters? Do you have any other insights to share about character introductions?

Thank you for this series of posts about character introductions. I am taking a lot of notes!

I like the Divergent and Hunger Games examples. I can see what you mean by making the stakes high. But they’re not so high as to dive right into the main action the way I tend to do.