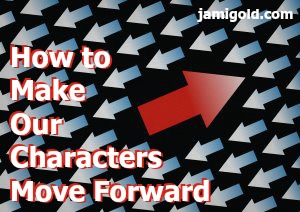 Editor Victoria Mixon states that our story’s Climax is “The Point” of our story. Whatever confrontation, revelation, redemption, growth, realization, etc. happens in the Climax is often the reason we decided to write the story back when it was just a twinkle in our muse’s eye. *smile*

The events of the Climax also create the story’s premise. If our Climax requires our character to confront the bad guy, the premise is an extension of that:

However, before the story beat of the Climax, our characters have just experienced the Black Moment/Crisis beat, and they’ve given up. How do we get them from point A to point B?

Kicking Off the Story Climax

I’ve mentioned before that the Climax is a different beat from the others because rather than falling at a certain page or word count, it takes up most of our Act Three.

But what makes our characters recommit? They’ve just symbolically died and had their failures shoved into their faces. Why are they getting up again?

Can a Character Move Forward “Just Because”?

It can be tempting to make a character “just do it” and not worry about why or how they have the motivation to move forward. In our own lives, we’re often looking for a magic wand to help us change.

Many use New Year’s Day as a superficial motivator for starting an exercise program. Others might have really good intentions to stop smoking or another bad habit.

However, we also know from real life that the majority of those efforts fail. Change is hard, and good intentions often aren’t enough to force us to stick with the work to change ourselves.

So in our stories, change will feel more tangible and real (and lasting) if there’s a trigger. Just like how in real life, an ultimatum might help us follow through on those good intentions, our characters will often do better if we trigger their change by forcing them into a corner and giving them no choice.

The Key to Satisfying Change

On some level, positive arc stories are inspirational for readers. They show us how change is possible, how change can lead to happiness and success, and how we’re stronger than we think.

These ideas often form one or more of the themes of our stories. We see characters rise to the occasion and do something they didn’t think they could do. Or we see them willing to try something they were never willing to do before. That courage and willingness to try is heroism.

When readers want to be inspired by heroes, they’re looking for stories where characters stand up to obstacles, dig deep within themselves to find courage, and recommit to the story goals despite everything working against them.

Even in flat or negative arc stories, readers can still be satisfied by characters who try. The point is that the characters have goals that they’re committed to.

Either way, Act Three is all about that journey. Readers want to see characters recommitting to the story goals and trying to succeed.

How Can We Force a Character to Recommit?

Characters don’t have to recommit to the story goals all at once. The Climax is filled with obstacles, each causing our characters to question whether they can succeed or stay the course.

Each obstacle can also provide an opportunity to show how our characters’ commitment strengthens and grows. We can start off with a trigger to get them to recommit and then build on their determination throughout the Climax.

The stakes (consequences) of giving up might be worse than they expected. For example, failing to stop the villain might lead to endangering someone’s life or a lost job or a ruined relationship.

The antagonist might force or manipulate them into a corner. For example, a villain might force a fight-or-die battle.

The options the characters thought were going to work are taken away. For example, their escape route might become blocked.

Caught in the Setting:

Related to above, the setting might not allow the characters to avoid a confrontation. For example, the character might be stuck on a plane with the villain.

A deadline can force characters to make decisions about how to proceed. For example, a character might need to forget planning and just act now to avert disaster (think of a romantic comedies where the hero runs through the airport to express their love before the heroine’s flight leaves).

Characters might learn something that reignites their hope. For example, they might learn their beliefs were false.

Sometimes our characters only need a reminder of their goals or motivations. For example, a sidekick or mentor might give our character a verbal kick in the pants.

Courage in the Face of Failure Is Heroic

Whatever triggers our characters to get back into the game, there’s an element of courage at play. They’ve already failed to some extent with the Black Moment/Crisis, so they know how easily they can fail again.

That they move forward despite those risks makes them characters we admire or are inspired by. They’re facing their fear and deciding they’d rather fail by trying than by not trying at all. They’re refusing to let their fears or their circumstances stop them.

We can all relate to that kind of courage, that kind of choice. That courage makes them heroic, even if they don’t get their happy ending. *smile*

Great article- very helpful! Definitely using it for my story. Thanks, Jami!

Yep, many of my posts are good reminders to me too. 🙂 Thanks for the comment!

[…] Gold explored how to make characters recommit to the story goal after the Black Moment, Kurt Chambers examines how to show emotions in your writing, and Janice Hardy shows how to craft […]

When Does It Make Sense to Make Big Revisions? | Jami Gold, Paranormal Author

Tangents and Subplots: When Do They Work? | Jami Gold, Paranormal Author

[…] Their Motivation: Does the relationship create or change the character’s motivation? […]