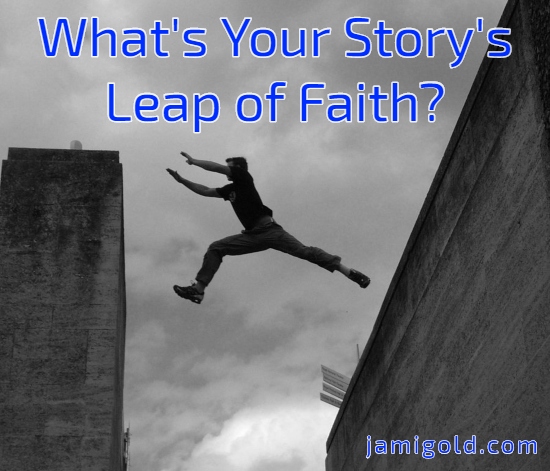 If we’ve ever paid attention to story structure, we might have noticed that near the end of a story, the protagonist often takes “a leap of faith” (at least in a positive-character-arc story, where the character has learned and overcome self-doubts). But it’s not always obvious how to add one to our story.

When I talk about this turning point in my Lost Your Pants? workshop, writers sometimes want to find a logical or factual explanation for why characters take this step. That’s understandable, as we do want our characters’ actions to be grounded in their motivations and previous characterization details.

However, this leap of faith is often a break from those previous details (which is where the “faith” part comes into play *smile*). At the same time, an unearned leap of faith can feel too convenient.

Let’s take a closer look at what we can do to make our protagonist’s leap feel earned and a powerful element of our story’s theme.

What Is a Leap-of-Faith Turning Point?

Throughout most of a story, a character’s fears and false beliefs hold them back. There’s a reason their problems exist, after all. *smile*

If it weren’t for their fears, the character could have succeeded in a relationship, gone after their dream job, etc. before the story ever started. The plot events that force our character to face their fears are the story, building to a final confrontation in the story’s Climax.

Does your story include a leap-of-faith turning point? How can they help our story? Click To TweetUnlike when our protagonist gives up during the Black Moment, however, at the Climax, they refuse to let their fears hold them back. Our characters push forward with a leap of faith and expose themselves to all the pain, all the vulnerability, all the risk (and unless our story is a tragedy, they overcome the obstacles and “win”).

In other words, at the leap-of-faith turning point, the characters find their courage. They’re now willing to do or risk things they wouldn’t (or couldn’t) do before—even though they have no reason to think the choice won’t cause the pain they feared all along. That’s what makes this moment a leap of faith.

What Makes a Leap of Faith Feel Earned?

As I mentioned above, a leap of faith is a break from what the character did before. Throughout the story, the characters might have learned to take risks, but only when they judge it “safe”—like a turtle slowly poking its head out of its shell.

How can we make sure a character's breakthrough at the Climax feels earned? Click To TweetAt the Climax, however, the character has to take the final step, even when they think the risk will result in pain. It’s often a moment of self-sacrifice. The turtle equivalent would be it ripping off its shell and saying “Okay, world, come get me.” *grin*

If we haven’t previously established their potential to take off their shell, that moment might feel too convenient, too easy. Earlier in the story we need to see them understand just how much their fears are constraining their potential. They might even long for the courage to let them go.

Then at the Climax, they can have an epiphany about how much the risk is worth it or that the pain of failing would be better than the consequences of not trying. That realization can be enough to motivate them to make different choices.

If we’ve established this earlier setup, rather than feeling too convenient, the break from their previous actions can give the impression of the character rising to a moment of heroism and exceptional courage. An earned leap of faith is a payoff to all the setup that came before in the story.

What Makes a Leap of Faith Strengthen a Story’s Theme?

A story’s themes are often related to how things change over the course of the story:

As a leap of faith focuses on a character’s motivations and arc, the most relevant theme element here is “what does the character learn?” Or like I mentioned above, what’s their epiphany to lead them to be able to make different choices this time?

If we’ve hit upon the right epiphany, the answer to the question of what the character has learned will resonate with other aspects of the story, which helps create a sense of the theme.

Example of an Epiphany and Leap of Faith Related to Theme

For example, here’s how we could develop a theme of trust over the turning points of a romance, including a related epiphany and leap-of-faith:

Note that this example shows the epiphany happening the Black Moment, but it could easily occur during the Climax too, such as in the example in this post with a survival theme. Plot events of our story determine the best location.

Leaps of Faith in Real Life

If we’ve done our job, the leap of faith in a positive-arc story should feel believable and relatable to readers. Best case, it should feel inspirational, like a pep talk to readers to take their own leaps of faith in their lives.

Just like our characters, we have fears and worries that hold us back. But sometimes we decide we don’t want to give those fears or worries any power over our lives and we take a risk, even when we don’t know what the outcome will be.

Also like our characters, what motivates us to take that step might be deciding that the consequences if we don’t are too dire, or we might have an epiphany. Or—because real life isn’t quite as full of drama as our stories—we might just decide to be optimistic. *smile*

My Recent Leap of Faith

A few months ago, I shared my story of deciding to try an experimental solution to fix a recurring infection disintegrating my jawbone. I thought that decision was a leap of faith on its own, but it turns out that was only the beginning.

I just had the follow-up appointment to that experimental surgery to check how my body is healing, with the fingers-crossed goal of seeing whether I could safely move on to the next step of rebuilding my mouth. Instead, the appointment this week resolved nothing.

Apparently, this super-rare, experimental metal that we’re using to trick my bone into regrowing doesn’t play well with the 3D panoramic x-rays needed to see the healing process. The metal inside my body decided to pull a JJ Abrams-style lens flare effect, making it impossible to visualize the bone around it.

(No, I’m not kidding. *sigh* A glowing stripe flared out on both sides of the metal across all the x-ray images.)

That meant we had to decide whether to take another leap of faith—this one even more blind to the potential outcome. My surgeon is optimistic, however, so we’re going to move on to the next step of the rebuilding process and hope it all works.

We’ve scheduled the surgery for next month. Wish me luck. *grin*

Hope your recent efforts work on your jaw. This has gone on so long. So sorry.

Hope the jaw surgery goes well! Yeah, as Elizabeth said, this has gone on for so long. 🙁

As for stories, I often find that characters make leaps of faith throughout the book, even near the beginning! For instance, a character impulsively asks a stranger to pretend to be his fiancé, so he can appease his pestering parents. XD And this stranger says yes. I don’t know about you, but I personally would not ask a stranger to do that; I would ask a friend or someone I know well. It’s too risky to ask a stranger, imo. But this is entertaining so I don’t mind seeing this trope in stories.

Another leap of faith I see (not just in the climax but in the middle of the story too), are when heroes trust the other hero out of instinct for something important. Often there is some lampshade hanging, where the hero thinks that this is crazy; why is he trusting this guy he has only known for a few days/weeks? But for some reason, the hero trusts that his love interest will come through and not betray him. Maybe this sounds unlikely in real life, but in fiction, I have no problems with such “irrational trust”. Perhaps we see some emotional connection between the heroes, or something about how the two interact, makes me feel that it’s natural and expected for the hero to trust him.