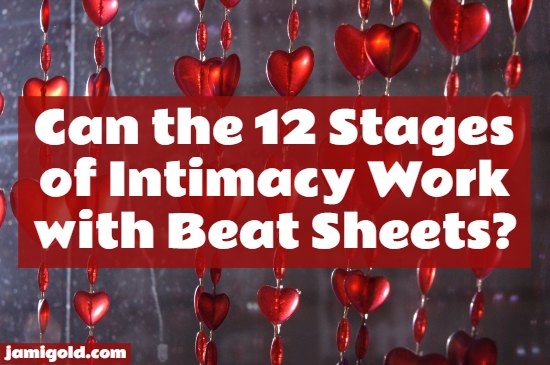 Today’s the day of my new workshop on my Romance Beat Sheet. Yay!

Ever since announcing my workshop, I’ve gotten several messages from writers wondering if I was going to cover A, B, or C. Not everything is a good fit for what I’m trying to do with the class, however.

For example, after attending the Romance Writers Summit, Cristen Edwards asked about a concept that didn’t quite fit my upcoming workshop. But it was a great question, so I figured I’d dig into the idea here.

“One thing I missed in the summit that I’d like to see in the workshop is the placing and or pacing of the 12 stages of intimacy. I know that with each story it will be different but can you place the intimacy within the best sheet?”

See? Great question. *smile* Can we mesh the 12 Stages of Intimacy with romance beats in a story?

What Are the 12 Stages of Intimacy?

Many years ago, the concept of stages or steps of intimacy crossed from Desmond Morris’ work, Intimate Behavior: A Zoologist’s Classic Study of Human Intimacy, into the romance-writing realm. Many romance writers—or those writing a romantic subplot—have since used these stages to make the growth of a romantic relationship in their stories feel organic or have a natural flow.

As I mentioned above, the stages don’t reflect every aspect of reality. Depending on our characters and story context, what feels satisfying to readers could be different.

When these stages were first brought into the romance-writing world, the explanations were very hetero-oriented, and slut-shaming lurked in the subtext (and sometimes the text). There was a lot of emphasis on when it was “fair” or not for a character to call it quits—when in the real world, I’d rather emphasize that consent matters at all stages.

(How many people regret sex but feel like they had to go through with it beyond a certain point? Too many. And that’s messaging I don’t want echoed in romance stories. Sexual frustration isn’t fatal and not nearly as psychologically—or romantically—damaging as feeling coerced into sex.)

Do the Stages Need to Go in Order?

Obviously, not every story will include every stage. Some “sweet” romances stop at just a kiss. That’s okay, as we’re all allowed to read and write what we like.

How does romance story structure apply to the 12 Stages of Intimacy? Click To TweetBut what about stories that might skip around? If the idea of the 12 Stages is to structure the growth of an intimate relationship in a natural-feeling way, wouldn’t skipping around break that feeling?

External plot events, such as another character interrupting the couple’s flirtation or foreplay, can mess up the order. Or couples can skip steps in a rush up the intimacy chart.

I’ve read a few books where a character’s attitude toward sex reflected less intimacy than a kiss, so the characters did everything but kiss until near the end.

The Stages Can’t Be Placed on a Beat Sheet

All those variations and exceptions explain the answer I gave to Cristen about how the 12 Stages can’t be plugged into a beat sheet formula, where a kiss should happen at X beat and sex should happen at Y beat for the “best” pacing.

Even if we follow the order, the speed can vary greatly. I’ve seen romance stories with sex as the Inciting Incident and others with it as the Resolution. (And yes, I’m talking about true romance stories, not erotica.)

While the Midpoint beat of a romance is often a sign of romantic commitment, such as a first kiss or first sexual encounter, there’s no rules for which stage should happen at the Midpoint—just that a stage usually occurs there. Instead, I recommended to Cristen that it might make more sense to think of the 12 Stages as a type of rising stakes.

What Are the Stakes in a Romance Arc?

In any type of arc, the stakes are the consequences of failure. We want the stakes in each arc and plot/subplot to increase throughout the story:

In other words, the more an intimate connection forms, the more emotional stakes there are in a romance arc. So where a stage should happen depends solely on the character and what level of emotional vulnerability and connection makes sense for them at each beat.

Can Seeing the 12 Stages as Stakes Help Us Write?

In general, looking at the stages as rising stakes means there shouldn’t be a move backward (going down a stage or more, such as pulling away) unless there’s a reason in one of the arcs (allowing fear to take hold, an argument or interruption, etc.). But at the same time, we can use the 12 Stages to help us show how the relationship is growing, beyond just the physical intimacy detailed (or not) in the text.

Several years ago, I shared Michael Hauge’s insights into how we can show that our characters are a perfect match. In his teachings of our characters making an Identity-to-Essence journey, our characters should connect “better” when they’re acting within their Essence, their potential:

In other words, when our characters are connecting with some aspect of their Essence, we can show how that brings them closer by going up a level (or more) on the 12 Stages path. The subtext this increase in physical intimacy adds to our story when used after an Essence connection is that our couple is a good match.

Can the 12 Stages of Intimacy be placed on a beat sheet? Click To TweetConversely, when they’re regressing in their character arc, such as retreating into their fear, we can show how they’re distancing themselves from each other by going down several Stages. Think of behaviors such as going below #3’s Voice to Voice with a silent treatment or them not even meeting each other’s eyes, etc.

Thanks to Cristen for the great question! I hope this gives us all ideas about how we can mix more stakes and showing into our romance arcs—both as they increase their connection and as conflict takes hold. *smile*

*psst* If you write romance and enjoyed this in-depth look at the romance arc, check out my Between the Sheets: Create a Deeper Romance with the Romance Beat Sheet workshop—tonight! There’s a lot more where this came from. *grin*

Your posts help so much. I am currently writing my first book so this is great timing. Thank you