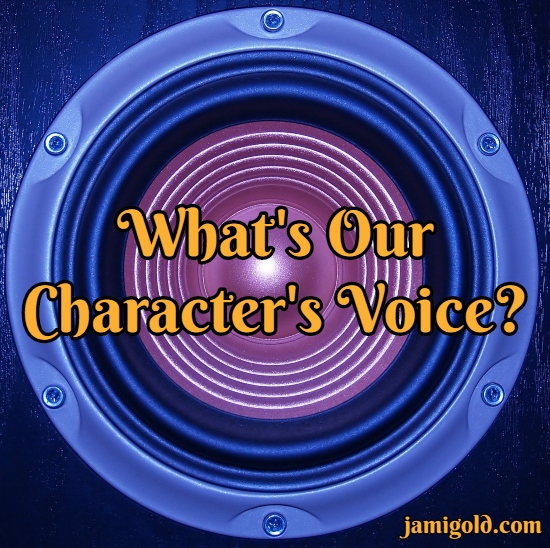 Ever get one of those injuries where you wish you had a better story to go with it? *sigh*

When a bundle of bamboo sticks I was trying to separate slipped, one punctured the tip of my index finger, right by the curve of my nail. Three hours of pressure and paper-towel-wrapped ice cubes later, the bleeding stopped so I could apply a bandage, but typing is…not fun.

So let’s do a shorter, fun post today. *grin*

How Much Do We Plan?

With story plot points, we talk about plotters (those who plot their stories in advance) and pantsers (those who write by the seat of their pants). As we’ve mentioned before, those are two extremes of a spectrum, and many writers fall somewhere in between.

When Characters Lead the Way

Believe it or not, that wrench in the plans might be a good thing when it comes to characters—especially if we haven’t let characters and who they are lead the way through our planning process.

There's no right or wrong way to develop our characters, but we might want to follow their lead Click To TweetMost of us don’t intend to write a story where the characters are shallow and one-dimensional. But if we don’t listen to our characters and tweak the story as we learn who they are, we might end up with characters who are puppets to the plot. If their actions and reactions are driven solely by what the plot needs them to do, that’s usually not a good sign for them seeming real, organically developed, or three dimensional.

In other words, even if we plot our story in advance (both the story plot points and the character arc), there’s a good chance we’ll discover a better idea or something new about them as we draft. At the same time, we have to find a balance so our characters don’t mislead us through the draft, going off on tangents, being too chatty about things that don’t matter, etc.

From One Extreme to the Other

On some level, the difference between plotting and pantsing is whether we try to discover our characters mostly with conscious questions and development in advance or mostly with our subconscious feeding us those answers as we need them.

At one extreme, if we want to be conscious with our development, we might:

At the other extreme, we might just try to listen to their voice in our head. We assume we’ll learn about them and their arc as we draft.

Or for something in the middle, we might figure out their beginning (Point A: what’s holding them back) and their destination (Point B: what they want):

Either way, at some point for many writers, our characters often become real enough to take the lead. My characters have been known to argue with me or stage a protest when they don’t like how I’m portraying them.

I’ve sometimes used that process to help me draft:

To non-writers, things like that can sound a little insane. *grin* But if you can relate, know that we’re not alone.

Is hearing our character's voice a good sign for our story? Click To TweetA study by researchers from Durham University found that 63 percent of authors can “hear” their characters’ voices in their head while drafting. In fact, I use this technique to get their speaking patterns and even accents and dialects correct.

But even if we never hear their voices, we often get the sense that our characters have a life of their own. And that’s a good sign that we’ve created three-dimensional characters who will seem real to readers too. *smile*

I’m not very audio-focussed, so I don’t hear my characters as such – but I do know when something ‘sounds’ wrong! I think it’s intonation/tone and vocabulary that I seize on most. I may not be able to tell you the pitch and timbre of my main character’s voice, but I can still tell you what he would say and how he would say it 🙂 Oddly, minor characters’ voices are easier to hear – maybe because they’re less complex?

Incidentally, have you ever considered writing a screwball comedy romance starring a person who’s constantly having mishaps and injuries plus, say, someone who works in an ER?

Yes! For me as well, it’s less about the sound of their voice and more about their speaking rhythms and choices, so I understand completely. 🙂

LOL! That would be a great story premise, wouldn’t it? That’s not my usual genre, but if I ever get in the mood, I might play with it. 😉 Thanks for the insights!

About striking a balance and not letting your characters push you down tangents: The way I see it, is that I can’t control my characters, but I can control the camera. They can blab and blab all they want, but I can swivel the camera away and spare my readers the boredom lol.

You know the basic storyline of a romance, where the two characters find their happily ever after (or happily for now)? Well, I’m worried that a number of my couples are straying further and further away from a happy ending. Their relationships are crashing and burning, rip. I refuse to write a story with a sad ending, but I don’t know how these couples are going to manage it, tbh. It all feels so hopeless. I guess this is the Black Moment/Crisis of the romance arcs. XD It’s daunting when you’re at that “all hope is lost” point, and you literally have no idea how the problem will be solved. Well I’ll just have to have faith in my characters and hope for the best. 😆

Yes! Excellent insight — It’s not about “controlling” our characters from going off on tangents; it’s about our choice of whether or not to show it with our “camera.” Perfectly stated! 😀

Good luck with all your Black Moments! You’re right that sometimes even we can’t see a way out. *winces*

Thanks and take care!
Do my characters ever! All subconscious in my case.

Your very first statement made me think of the time I twisted my ankle so bad I thought I broke it. When I told my doctor that I just stepped wrong, he said, “Aren’t you a writer? You should make up a more entertaining story.” So I did. 😀

I think I fall somewhere in-between. I am a huge planner. The plans for my stories involve basic outlines, detailed outlines, scene development, character journals, and more. Despite all the planning I do, I am flexible enough to let things take their own course from time to time. I mentioned to you on Twitter how one of my characters throws the f-bomb even though I don’t care for cursing. He is one character who has taken on a life of his own without any planning on my part.

Although planning is my super-power, I enjoy it when the story or characters grow beyond my original intent.

Thanks for sharing. I hope your finger feels better soon.

Hi, Jami. Yes, my characters have minds of their own. In my current wip. One character was supposed to be a very minor one. A servant, in fact. She had different ideas and pushed her way forward, volunteering to escape a dire situation with her mistress and ultimately sacrificing herself so her mistress could escape.
The first time this happened I seriously wondered about my sanity, but I’ve heard so many others say it happens to them that it’s set my mind at rest. However, I don’t think non-writers would understand, and they would doubt my sanity.😕
I also ‘hear’ the way they speak, in my head. This helps a great deal with writing their words.
I hope your finger is soon better. Typing must be a nightmare.

[…] Keep in mind you are creating strong characters and maybe the plot or arc you initially built isn’t strong enough. As you write you can see a different journey based on the goal of your character(s). Like I said before- it might or might not work. That is up to you to determine later. I was reading online and found something that might break it down a bit more for you. Check it out: Do Your Characters Take on a Life of Their Own? | Jami Gold, Paranormal Author […]