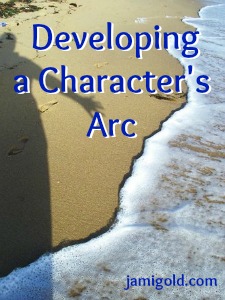 There are almost an infinite number of ways we can develop our story. Some plot every scene in advance, some plan only the high level story beats, and some write by the seat of their pants.

At the same time, some writers start with the plot and then work out the characters inhabiting that world, and some start with the characters and then brainstorm their situation. Some are inspired by an idea for a scene, and some find inspiration in a big-picture premise. Some write linearly (writing scenes in order), and some piece out-of-order scenes together later.

These story development processes are all valid. As long as we end up with a finished book, our process worked for us. *smile*

What Is a Character Arc?

No matter what process we use, we’ll probably have to come up with an arc for our protagonist at some point. A character arc (sometimes called their emotional or internal arc) refers to how a character changes and/or how the story or plot affects them.

We’re not talking about a character’s appearance, job, or family situation here. Instead, a character arc is about their internal journey:

Author K.M. Weiland has a great series on her blog about the three types of character arcs: positive, flat, and negative.

Just like the variety found in the overall writing processes we might use, we have many options for how to come up with our protagonist’s arc as well.

Elements of a Character Arc

A complete character arc (especially a positive arc) will usually include most of the following elements:

Methods for Developing Our Protagonist’s Arc

As mentioned above in regard to story development processes, there’s no “one right answer” for developing our character’s arc. Different processes can all lead us to a complete understanding of their arc, but the starting point or the creation journey can vary.

There’s no one element of a character that has to be a foundation upon which we build everything else (no matter the bazillion blog posts that tell us otherwise). Just like with the validity of starting with plot vs. character, we can build in many different directions and still end up with a finished arc.

Every story might challenge us in a different way. We might find ourselves using one method with one book and experimenting with another method for a later book. So it’s good to understand our character-development options in case our default method isn’t working for us.

We could start with…

I came up with this list of approaches off the top of my head, but I hope it’s enough to demonstrate how it doesn’t matter what element we start with.

I’ve seen countless blog posts asserting the “proper” way to develop a character arc. They’ll act like one element is the foundation for all the other elements, but the truth is that they all interrelate.

Yes, in a story’s chronological order, the backstory wound causes the fear and false belief holding them back. However, a false belief such as “people aren’t to be trusted” could be caused by many different wounds, so the specific wound of our character could be decided later, even though it happens first in our fictional chronology.

Similarly, if we start with the plot, we might know what the character needs to learn to win the final showdown with the antagonist. From that, we could figure out the fear and false belief they need to overcome to reach that point.

Whatever the seed idea for our character, our story can feel complete, demonstrate a theme, and inspire readers no matter how we construct our protagonist’s arc. So don’t believe the blog posts acting like there’s one right way. If we get stuck on one point of development, we can always try another angle. *smile*

Do you struggle with building character arcs? What makes it tricky for you? Have you seen blog posts acting like one element is the foundation for all the others (implying that we have to start there)? Do you usually start with a certain element or do you vary your approach as needed? What elements come most easily to you? Which are hardest?

I had no idea what my protagonist’s character arc would be when I first started. I had a freaky idea that was a mash up of elements two M. R. James short stories and had to build a plot to house it. It’s turning out to be something that sounds quite grown up, despite its origins of me just wanting to write something weird!

LOL! Love it! And whatever works, works. 😀 Thanks for the comment!

I appreciate your discussion of developing plot. I usually just sit down and start writing without much planning and this is how I often get stuck. If you don’t know where you’re going to end up, how do you write about the journey? I’m working on a project and I think I might try the idea of developing the plot fully before I start creating characters. Thanks for this post.

As a pantser, I often have only a vague idea of where I’m going to end up, but even just an idea of whether our worldview leans toward positive arcs or negative arcs gives us something to aim for. 🙂 Good luck with your experiment!

What’s making it tricky for me is my story doesn’t have a happy ending. My protagonist’s arc is one that is continually getting morere and more negative. I’ve been “told” [blog posts mostly] a novice writer shouldn’t take on such a story. Yet, I’m determined to do it. Something is compelling me. Each step is to show a flaw, weakness, false belief, or fear in my main character.

If we’re driven to write a certain story, I think we should use that drive and passion to create an awesome story. I haven’t heard the advice that novice writers shouldn’t take on a non-positive arc story, but I’m sure some believe that to be the case.

If I had to guess, I’d think the problem is that most people are extremely familiar with positive arcs, from children’s stories to movies, so it’s perhaps easier for novice writers to intuitively know how to write those. However, most people are less familiar with flat or negative arcs, so they might not know how to construct those types of arcs on a level where it comes naturally to them.

In your case, if this negative arc is coming naturally to you, that should remove the concern about whether or not you could pull it off. Maybe review the links in K.M. Weiland’s series about negative arcs, just to make sure you’re taking advantage of that arc structure, but I say not to worry about that “don’t do it” advice. 🙂 I think you can succeed! Good luck and thanks for the comment!

I’m a novice too and writing a tragedy. A positive ending feels wrong for the story. I’m not against happy endings, sometimes I just wish everything would go to hell for a change! I’d love to see a disaster film once in a while where the world isn’t saved! I have searched online for resources on writing tragedies, but most of what I’ve found relates to plays rather than books.

Thanks! If there is a long way to go, the book will turn out to be long as well. But even a short story can redefine some character’s emotional strength or skillset.

Great point about story length and character arc! A short story might have a lot fewer of those elements, but even a small realization (“Hey, I can do this.”) shows some growth. 🙂 Thanks for sharing that insight!

I’m just not sure how much character arc the anateur sleuth has in a cozy mystery. I read somewhere that there isn’t much change when it comes to protagonists like Stephanie Plum and Jaine Austen who are the main characters in comedy mysteries. I’m working on developing a similar character for a cozy mystery.

Yes, as I mentioned in the post, some genres like mystery or thriller series can have more of a flat arc. In a flat arc, the protagonist’s “change” over the course of the story tends to focus more on their attempt to confront and change the world around them. KM Weiland’s posts on the topic are the best explanation I’ve seen for how to make the most of those types of arcs. 🙂 Good luck and thanks for the comment!

I have started in the middle, with a scene and characters firmly in my mind, and worked around it at both ends. Its nice when a story is linear and remains so, but its rarely me. I guess thats why I like editing; I get to flesh out all those ideas and characters. I do like your lists of what characters need to accomplish; sometimes I need that to keep my plots simmering.

Cool, I’m a complete pantser, so the character arc elements could appear in any order to me! E.g. Discovering a character’s flaw, then a backstory, then seeing changes in their beliefs and behavior due to whatever cause, etc. Or it could be: see mysterious hint of backstory, then faulty character beliefs (from dialogue and internal dialogue), then the hint that the character is hiding something from other people or is lying to themselves,…and so on.

There could be different orders for different characters in the same book too.

Top Picks Thursday! For Readers and Writers 08-25-2016 | The Author Chronicles

[…] Those pesky characters can keep us writers up at night. Jody Hedlund has 6 key things to consider when developing characters, Becca Puglisi explores the emotional wound of being rejected by your peers, Zoe M. McCarthy shows how to use point of view to deepen your scene, and Jami Gold seeks the best approach to character arc development. […]

[…] Get Stuck: What should we do if we get stuck in our plot? Or with our character? How do we develop a character arc? How can we avoid a “sagging […]

How to Strengthen Our Characters with Strong Writing | Jami Gold, Paranormal Author

[…] agency. They might take foolish actions, being “too stupid to live.” Or they might lack a strong arc, showing how they’ve grown and bettered […]

[…] improve our writing craft (such as using rhythm or rhetorical devices) or our storytelling (such as developing our character’s arc), we need to be—as Jeff said—a conscious writer. Or as I’ve said before, we need to write […]

[…] Get Stuck: What should we do if we get stuck in our plot? Or with our character? How do we develop a character arc? How can we avoid a “sagging middle”? What do we need to include in our story’s […]