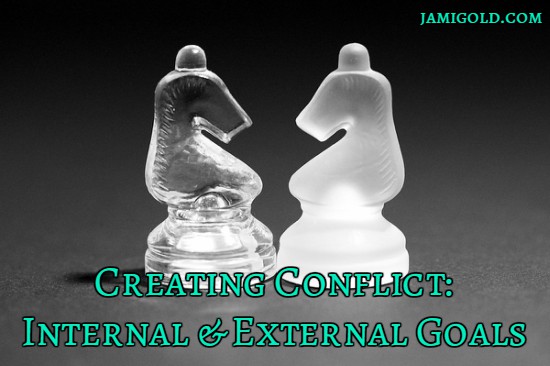 Last time, we explored what goes into creating layered characters. One example I gave for the types of elements we layer into our stories was conflicting character goals:

In other words, just as our characters can have inner and outer layers, the same applies to their goals, needs, and longings. Those goals can give them internal and external arcs.

That example led Karen to ask in the comments:

However, that’s a great question from Karen, so let’s take a closer look: What do we mean by conflicting goals—and how do false beliefs play a role?

Let’s start first by defining some of these terms…

What Are External and Internal Character Arcs?

Stories are about change, and arcs are the path of change from the beginning of a story to the end. Character arcs focus on the change that happens to characters external or internally:

What Are False Beliefs?

The four main elements of a character’s emotional (internal) arc are:

As I’ve explained before about how to show a character’s false beliefs, these false beliefs are things the characters believe that we, as the author, know not to be true. They’re not really unlovable, a loser, unworthy, deserving of their pain, etc.

However, their Wound makes them believe so, and more importantly, it makes them think they’ve reached this conclusion logically. They don’t think they’re being delusional.

How Do False Beliefs Fit into Characters’ Internal Arcs?

A character’s internal journey—their emotional arc—is the path of change we can see in a character’s thoughts, beliefs, behaviors, etc.

Over the course of the story, characters move two steps forward and one step back in their journey to overcome their False Belief and Fear. By the story’s climax, a plot event that would normally trigger a character’s False Belief doesn’t, and furthermore, the character rejects their former belief, often stating for the sake of the theme or the antagonist that they now know it not to be true.

Ta-da! The reader sees the character change and the emotional arc is complete. *smile*

Now, what does all that have to do with conflicting goals?

The desire Karen mentioned for her character—to be in a loving relationship—could be an external goal if the character is taking tangible actions to make it happen (i.e., stuff that other characters would see). For example, they could ask their friends to set them up with others.

In other words, the external goal—and thus the journey to reach that goal—is often related to direct, tangible, visible, plot-related actions taken by the character.

So if we’re not sure what our character’s external goal is, take a look at the plot first: What are they trying to accomplish on a conscious level?

However, a character’s desire to be in a loving relationship like Karen mentioned is more often an internal goal, as it’s usually more subconscious than something a character actively pursues. That differentiation in characters’ awareness of their goals is why I like to use the word longing when talking about internal goals.

What's the difference between internal and external goals? Click To TweetAt the beginning of the story, characters can be broken or stuck in some way. The internal goal—and the journey to reach that goal—grows out of their deep (often, so deep as to be subconscious) unmet needs, desires, or longings that they’ve been ignoring.

If we’re not sure what our character’s internal goal is, take a look at how they’ll internally change by the end of the story: What do they learn is important to them? What are they willing to sacrifice for? These needs can be generic: love, survival, safety, justice, protection, etc.

Creating conflicting goals means that we’re setting up their internal and external goals in such a way that our characters can’t easily reach both. This creates internal conflict, as they struggle to prioritize, and can lead to external conflict as well.

For Karen’s story, a need like “to be appreciated” or “to learn to trust again” wouldn’t be in conflict with the need she mentioned “to be in a loving relationship.” Those needs often work together.

But let’s see how we could add a conflicting goal to that situation:

How can giving our characters conflicting goals help our story? Click To TweetAll this said, if we can’t break our character down to internal and external goals, we can simply set up any two conflicting goals: What two needs does the character have that they can’t decide between? Focusing on internal and external goals is often easier—just because we should already have both types of goals for strong, well-developed characters—but sometimes we might find other goals (like two external or two internal) in opposition instead.

However we decide to add opposing goals, we can see how pursuing the goals might strengthen the false belief or prompt self-sabotaging behaviors or cause other problems, making success harder or at least questionable. That’s conflict—and in storytelling, conflict is good. *smile*

Does the difference between internal and external arcs and goals make sense? Do you write your characters with conflicting goals? If not, does this give you ideas for how to add them? If yes, do conflicting goals help increase the conflict in your story? Do you have any questions about goals, arcs, or false beliefs?

A solid analysis of how goals and beliefs fit together.

One other thing: a part of how wounds shape false beliefs is the wound’s context. The classic way to make a man think love is worthless (false belief) is to break his heart (wound)… but that works differently based on his past. If it was his first relationship that went wrong enough it can put him off love forever. But the more he’s already had a history of being handsome, rich, or otherwise crowding his dating life, the more he’ll read that heartbreak as “sex is still easy, it’s caring that’s stupid.”

Hi Ken, “building up momentum on turning a need into an active goal” is certainly one way internal and external goals can be different, but that’s not always the case. You’re right, though, about how actively a character works toward a goal is often a factor (as internal goals are often more subconscious). One thing to remember (and that I should have mentioned in the post) is that goals can change over the course of the story. So we can imagine one external goal being something our character has been planning for a while, but then if they learn something new or different about the situation, their external goal can change instantly (i.e., no momentum or building up) to address the new issue. For example, a character might have an external goal of “clearing a relative’s name,” but if they later find out the relative was guilty of the crime, that external goal can change, even to “ensure the truth comes out.” (This can be tricky if we’re not careful about having the story goal (i.e., story problem) established by around the 25% mark, just because readers can get frustrated or confused about the point of the story if they feel misled.) In both situations, the character’s external goal has them working actively to do something, but in the second case, any momentum behind it might come from a non-opposing internal goal–such as a conscious need for justice–rather than from the external goal itself. (And maybe that’s in line with…  — Read More »

Great post, Jami. I am currently working my way through the Story Genius self-study course and your post helped to clarify some points for me related to the scene cards for Lisa Cron’s Story Genius Blueprinting System. Thanks! Hope you have a great weekend.

Thanks! The best example I have written is a young man who has tried to find his missing father, believing that someone harmed or killed him; but he gave up, knowing that perhaps he did not want to find out that he had been abandoned.
This thread is resolved at the end of the tale, of course.

On characters believing they came to their false belief logically, what about characters who know that their false belief is wrong on an intellectual level, but on an emotional level, they believe it anyway? This is quite common in real life, where rationally, you know you’re not really useless/a loser, etc. But emotionally, you still feel that you are. I imagine some story characters would be in the same situation.

Their internal arc could be to convince their emotional and subconscious side to reject the false belief too. (This is what we keep trying to do in therapy!) After all, it’s not enough to KNOW something cognitively. You have to FEEL the truth of that something as well.