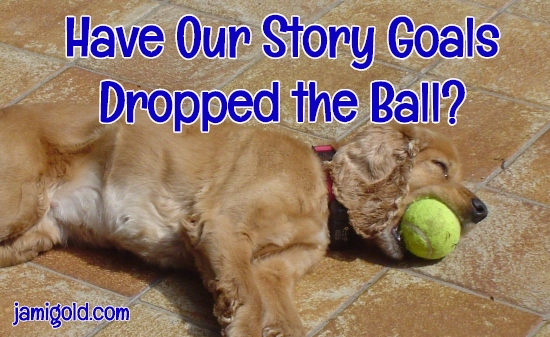 Last time, I shared my Resident Writing Coach guest post over at Writers Helping Writers and talked about how weak or passive goals in our story can hurt us. The comments over at WHW brought up some great issues and questions that I want to dig into more here.

As we’ve been discussing in the comments of my guest post, our characters often start with passive internal goals. They don’t want to change—and they often don’t think they need to change. After all, change is hard. *grin*

Their desire to stick with the status quo is a passive goal. That’s okay because that’s normal and human. So let’s take a look at how we can make those passive goals work for us and our stories.

Passive Goals Are a Problem When…

The problem with passive goals isn’t that they exist. We all want certain things to stay the same in our life, but that’s not the stuff of stories. What makes a story is when that passive goal turns into an active goal through struggle.

So the problem with passive goals is three-fold:

Let’s take an example of a character starting off the story not wanting to rock the boat in her conflicted relationship with her father. She wants to maintain the status quo of pretending that everything’s okay between them. That’s a passive goal and fine for the beginning of a story.

How can we show a character grow from the passive goal they start with to an active goal that creates the story? Click To TweetHowever, if we recognize that’s a passive goal, we can question ourselves on what their active goal is likely to be eventually. With that information, we can develop ideas for how to push them toward that active goal throughout the story.

If her passive goal is a core part of the story (rather than a subplot), we might ensure that readers know their relationship is far from “fine” and include situations, obstacles, and stakes to increase the conflict between them. At the same time, we can show her struggling more and more to bite her tongue around him, hinting to readers that an active goal lurks on the horizon, even if the character is still in denial.

Can Passive Goals Ever Help Our Story?

With that example, hopefully we can see how passive goals aren’t “bad” if we use them properly. In fact, passive goals can help our story in several ways:

Wait, what? How can passive goals create conflict?

It all comes down to making the internal into the external. Or as Dani Harper asked in the comments of my guest post at Writers Helping Writers:

“How would you handle a story where the passive goal IS the problem to overcome?”

In other words, sometimes a character’s desperate clinging to their passive goal is what needs to be confronted. Let’s take a look at how we could show that in our story.

Showing a Change from Passive to Active

For some of our stories, a character’s denial and adherence to their passive goal just gives them a starting point. They might switch to an active goal:

For other stories, especially character-driven ones, the character’s denial goes deeper and is the problem that needs to be overcome. In that case, the character is acting as their own worst enemy.

In every story, we incrementally turn up the pressure—such as showing them more frequently needing to bite their tongue—but with an “own worst enemy” story, we also need to create a turning point that forces them to confront their denial and choices. They’re acting as the antagonist in the story, so the active goal will be them overcoming their internal issues, even though they don’t know it yet.

In these types of stories, where their adherence to their passive goal is the problem, our story’s plot needs to reveal their character:

As with many aspects of writing, certain techniques or approaches aren’t necessarily “bad” in every way. Adverbs aren’t always evil, etc. The problem comes when we use them inappropriately.

The use of passive goals is no exception. They can actually help our story—or even be the core of our story—but only if we know how to use them. *smile*

P.S. If we’re writing romance or other stories with multiple protagonists, learn how we can have even more flexibility with our characters’ goals.

Sometimes, the passive goal has an active goal underneath, as in your example with the daughter and father. So I have a character (Theo) who currently has a happy relationship with his partner (Pyris). Theo definitely wants to keep his partner and maintain the strong relationship, which could be seen as passive. But then you see moments of worry and insecurity, where Theo feels that though they love each other and are close, it feels that there’s an invisible wall between them, like they’re close but not close enough. He doesn’t really understand why he feels this way, since Pyris isn’t distant or rejecting or anything. This sense that there’s an invisible wall between them increases. Eventually, the two partners have a talk that obliquely addresses the issue. They both reveal that though they love each other, they’re afraid of the future, afraid that this happiness won’t last. An odd turn of events finds Theo switching bodies with his past self (or his future self, depending on your perspective). Pyris is delighted and admits that this new Theo (this Theo from the past) is much more passionate and less restrained. The previous Theo, though noble, honorable, and kind, just couldn’t let go enough to enjoy the relationship and frankly enjoy his partner, both sexually and emotionally. This is as far as I’ve gotten, but like in therapy, the discovery process is gradual. I get the sense that Pyris appreciates his partner’s magnanimity and sweetness, but Pyris wants something more too.…  — Read More »