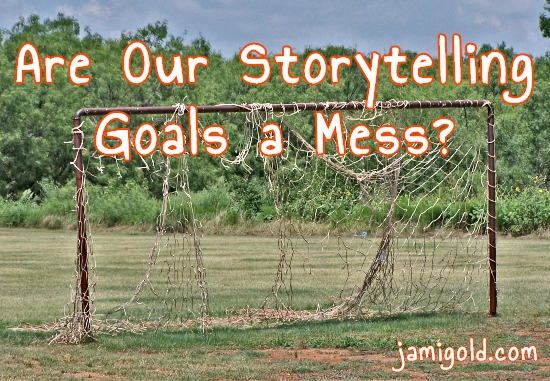 A few weeks ago, I shared my Resident Writing Coach guest post over at Writers Helping Writers and talked about how weak or passive goals in our story can hurt us. Then we dug more into weak goals—how they can sometimes help our story and how we can turn them active over the course of a story. Finally, we explored how goals (whether passive or active) work with a romance or multiple-protagonist story.

In the comments of that last post, Anne Kaelber asked a fantastic question:

“Can there be too many goals (for one character, or for the story as a whole)? If a passive goal can drag a story down, will too many active goals make the story feel cramped, rushed, chaotic (or all of the above! *grin*)?”

As Anne alluded to, there’s more than one kind of goal we have to juggle when writing our stories. She mentioned story goals and character goals, but let’s look at the various types of storytelling goals and talk about how each type of storytelling goal might make that juggling act more difficult.

Obviously, as the author, we have a goal of sharing our story idea with others. *smile* However, we’ll often have other author-goals for our story as well.

Goals like “writing a funny story” usually won’t create too many problems for that balancing act we have to do with all the various types of goals, but occasionally even that type of goal can interfere. One example of a juggling issue with a “funny story” goal would be if our story idea or characters’ personalities veered more toward the serious.

Relatedly, we’ll most commonly run into problems with story-related author goals when what we want for our story doesn’t naturally flow. We’ve probably heard the advice to avoid making our characters be “puppets” to the plot, and that usually happens when we want A, B, and C to happen in our story, even though they don’t ring true for our characters or previous story events.

All those posts I mention above focus on story goals and character goals, but what are story goals?

Every story revolves around a central problem that needs to be solved. A story goal is about the struggle to solve the main problem.

What are the different types of goals we need to juggle when storytelling? Click To TweetIn other words, story goals define the plot and/or character arc: What point, showdown, confrontation, accomplishment, epiphany, etc. is the story working toward? The story generally builds toward the Climax, and during the story’s Climax, the protagonists will succeed or fail with that goal.

Our stories can have multiple story goals, but usually they occur sequentially, as our characters—and the readers—learn more about the central problem. We have to be extremely careful about allowing multiple story goals at once, as a story won’t feel complete until the story goal (or goals) is resolved with success or failure.

The process to align those goals might take only a single scene, or it might take most of the story. Characters who never get on board with the story goal act as antagonists in some way, leading to failure for either the story or character goal and may result in a bittersweet ending.

Obviously, character goals are about what characters want, but as mentioned before, these goals frequently change over the course of the story. Our characters might start off with relatively selfish goals and adopt the story goals later, maybe after they see the consequences of not taking action.

Given some of those examples, it’s easy to see that character goals can be tricky to juggle, whether due to changing events, multiple characters, or layered characters (or all of the above).

Our characters’ multiple goals might be a mix of passive and active as well. For example, our protagonist’s internal goal of “healing strained relationship” might be expressed externally by passively avoiding the confrontation about their parent’s dangerous driving habits for as long as possible, even though they know they need to be active about forcing the change.

We run into that type of conflict between our goals all the time in real life. Every day, we have to juggle priorities between our different goals.

As long as we share insights into our characters’ emotions, thoughts, and/or motivations about the various goals, this type of conflict will feel real and natural to readers. They can relate to multiple goals and the prioritization balancing act.

Problems come up only when we haven’t provided enough information, enough context (or at least subtext), for readers to understand the conflict. Without that context, our characters will often seem to be acting out of character or like those “plot puppets.”

We’ve probably heard the advice that every scene needs some type of conflict because it drives the forward momentum our story needs. No conflict, and there’s no point to the scene.

Similarly, every scene needs a goal. A scene goal is whatever the protagonist wants at the beginning of the scene.

For example, if our character has an overall passive goal of avoiding a confrontation with their elderly parent, in a scene with both of them and a third party who’s complaining about the driving issue, the protagonist’s active scene goal might be to change the subject or distract or escape.

Because scene goals are more short-term, they’re often very concrete and tangible. That means we usually wouldn’t have competing scene goals unless the text is very clear.

For example, our character might sneak into a villain’s lair with both the goal to find information about the villain’s evil plans and to discover where the villain is holding their kidnapped love interest, and readers would be very aware of both of those goals. Those goals would then be in conflict when our character needs to prioritize which one they go after first. However, stories often include plot events that change our character’s mind or make the choice for them, such as stumbling over other information first, etc.

Each of those goals helps move the story forward. So even if our story uses many passive goals, we can make our story feel active if we use strong active scene goals.

Now let’s get back to Anne’s question of whether there can be too many goals. All this talk of the many types of goals we encounter in our storytelling makes it obvious that juggling multiple goals is normal. *smile*

However, the complexity increases when we’re talking about juggling several types of goals at a time. It’s not unusual for these different types of goals to be in conflict sometime during our drafting process.

How Multiple Types of Goals Can Help Our Story

In real life, we often have to juggle the priorities of our lives, and the same goes for our stories. As authors, we might prioritize whatever type of goal will…:

How Multiple Types of Goals Can Hurt Our Story

The problem is when we can’t turn the conflict between our various storytelling goals into something good for our story. So to answer Anne’s question, it is possible to create a too-chaotic feel for our story by throwing in too many active goals—but only if we can’t make them work together.

Can our characters have too many goals and make our story chaotic or rushed? Click To TweetAs with the examples shared in the Juggling Scene Goals section above, we can include many active goals if they follow a cause-and-effect chain or if they’re each clear to readers as far as priorities or motivation.

But our story will feel too rushed or cramped if focusing on one goal takes away readers’ ability to understand or appreciate the other goals. If a goal—whether active or passive—doesn’t further the story directly or through our process of resolving the conflict it creates, then it can hurt our story no matter if it’s our second active goal or our twenty-second.

In other words, what makes a story feel cramped, rushed, or chaotic when it comes to goals isn’t about the number. Rather, it’s about whether all the goals play together to create a stronger whole—or whether the goals interfere with the storytelling in ways that can’t be resolved. *smile*

P.S. Don’t forget to enter my Blogiversary Contest! We’re almost up to two winners, and the more comments we get, the more winners we’ll have.

Do you struggle with juggling all the different storytelling goals? What type of goal do you struggle with the most? What type of struggle have you experienced (goals in conflict, prioritizing, balancing, etc.)? Does this post help explain the various issues surrounding storytelling goals? Do you have any questions about goals, resolving their conflicts, finding a good balance, etc?

What a helpful post, Jami. I haven’t commented here before but I’ve been receiving your excellent newsletters for sometime. The advice you so generously offer is incredibly useful – even if I might know some of what you highlight there’s always something I hadn’t thought of before. But today’s post is especially useful to me. It came at just the right moment as I start to redraft my latest rather flabby manuscript before it goes off to the editor. Your take on story goals will help focus my mind. So I wanted to say thank you.

Outstanding, as always! Thank you for writing this one. I’ll be referring to it often, when I’m scratching my head at my various goals in this novel. I think you explained it very well (and confirmed what I was leaning towards for my own answer).

I’ve been doing way too much physical stuff (painting a room and moving my home office to it) and been too wiped physically and mentally to do any writing-related tasks. I’m itching to get back to work…and my office is still in chaos. But, hey — my paint colors turned out better than I could have hoped, so that’s a win. 🙂

Keep on being awesome!
Anne