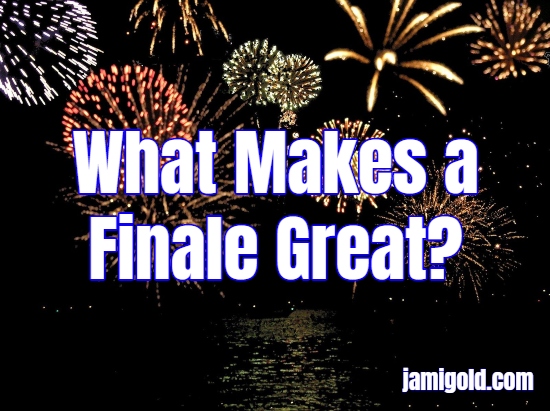 We’ve probably all seen dozens (or hundreds) of posts exploring how to begin our story. Many writing contests focus on our opening pages or even our first line. That makes sense, as we all know how important our story’s opening is for gaining readers.

However, as the saying goes, our story’s ending is what sells readers on our next book. Yet we don’t see contests helping us figure out how to write an emotional ending or a great final line.

I’ve written several posts that dig into different sections of our story and discussed what that beat or act should include:

But you’ll notice that the Resolution story beat isn’t on that list…yet. *grin*

What “Counts” as Our Story’s Resolution?

If we’ve studied story structure and/or beat sheets, we’ve seen references to the last beat of our story. Depending on the story structure system, this last beat might be called Resolution, Final Image, Aftermath, Falling Action, Denouement, or something similar.

How do can we make our story's resolution strong and satisfying? Click To TweetAs I’ve mentioned before, the names don’t matter, only the function. And in every story structure system, the final beat is meant to wrap up our story.

In other words, if we usually consider our story “done” when the plot is wrapped up, we likely still have other elements that aren’t quite satisfying to readers yet. So our story’s wrap up has a number of jobs to do, which we’ll get into below.

(Also note: If our story includes an epilogue, that epilogue would be considered part of the Resolution when it comes to filling out a beat sheet or deciding what our story needs.)

Example: Resolution of a Mystery

If our story is a mystery, the Climax is the reveal or apprehension of the bad guy. However, there are often still story arcs to wrap up in the Resolution:

All together, those elements are meant to give readers a satisfying ending to a story that feels complete. Without those additional tidbits, the ending would feel abrupt and leave major arcs hanging.

What Makes Our Story Feel Complete?

Every story can have many “moving parts”: the plot arc, character/growth arc, main story question/conflict, subplots, theme, genre aspects, etc. Many—if not all—of those story elements should be at least touched on in a story’s Resolution.

Our Resolution should definitely * include:

Depending on our story, our Resolution might also include:

How Long Should Our Story’s Resolution Be?

Many Authors Rush the Ending:

As a romance reader and editor, I can’t think of a single example where the author spent too much time delivering the happy ending in a romance. On the other hand, I’d say around a third of romance stories I’ve read without an epilogue feel too abrupt—and any conversation with other romance readers will reveal I’m not alone with that impression.

Unless our story is super-short, anything less than a page is likely too short. Most beat sheets suggest the Resolution should take up 1% or more of the total story word count—that’s about 3-4 pages for a novel.

The Gray Area between the Climax and the Resolution:

Depending on our story, there can be debate over where our Climax ends and our Resolution begins, especially when it comes to subplots and character arcs:

Do those character-arc-related pages count toward the Climax or the Resolution? It likely depends on the story, so we shouldn’t worry too much about it and think more about ensuring our story includes everything it should. *smile*

Some genres want “messier” endings, without everything wrapped in a bow. Other genres expect strong proof of a satisfying ending.

Some genres look to straightforward storytelling for a sense of closure. Other genres rely more on subtext to hint at a resolution.

Some genres have strong expectations of emphasizing a story’s theme. Other genres just need an offhand mention.

Storytelling is an emotional journey for readers, and good storytellers pay attention to that journey from their readers’ perspective. And even though every aspect of our story contributes to the overall journey, the ending of our story is key to our readers’ experience.

In other words, some authors are less likely to rush their endings because they’re more conscious of ensuring their story Resolution fulfills not just the story’s emotional journey but completes their readers’ emotional journey too.

How Can We Write a Great Final Line?

Just as our story’s opening lines are more important than others, so too are our final lines extra important. The last line of our story is our last chance to leave readers with an impression, whether we want to:

What creates a great final line in our story? Click To TweetAll of those goals for last lines are about creating emotions in the reader. Those emotions might be directly related to the story itself (like the warm fuzzies delivered by romance stories) or they might indirectly lead to emotions by resonating with readers (like a memorable last line).

Can We Really Add More Emotion with a Single Line?

When I’m wearing my editor hat, I often give suggestions to strengthen the final line of my clients’ stories. Usually, these suggestions are related to adding a callback to the theme or simply ending on a more emotional note by adding one more sentence.

As I mentioned in my post about creating strong scene endings:

Sometimes if our scene doesn’t end on an emotional note, it’s because we ended our scene too early, before we gave the scene a point (or at least before we emphasized the point). In this case, it’s often easiest to add a sentence or two to drive the scene’s arc home.

For example, if we end on straight action that’s not surprising or symbolic, we could add a final internalization that acts as an emotional summary of what they’ve learned…giving the scene an emotional purpose.
She turned off the light and left the room. If only she could leave behind her past as easily.

Sometimes, emphasizing a character’s reaction and decision to the scene’s events can add a sense of completeness to the scene.

What Should We Keep in Mind for Our Last Line?

Like in the scene-example above, a last line is often an emotional reflection. As K.M. Weiland shared long ago, for a strong emotional note, our last line might:

With the knowing smile he gave her, she finally—finally—felt like they’d won against the naysayers. And with any luck, the love they’d discovered along the way would last them for the rest of their lives.

With a strong Resolution and emotionally resonant last line, readers will feel a sense of completeness from our story. A satisfying story becomes part of our “brand” in those readers’ eyes.

Our author brand can encompass our genre, the types of characters we write, our themes, etc., as well as the emotional journey take readers on. A positive sense of our brand in regard to that last one—that we know how to deliver on our story’s promise—is one of the best things we can do to turn one-time readers into long-time fans. *smile*

Do you agree that a story’s ending is important for creating repeat readers? What story endings have stuck with you? What made it stick? Have you read stories where you were disappointed with the ending? What made it disappointing? Can you think of other insights to add?

Thank you for this great post. It is important that minor characters are completed as well.

Yes, Cally! Good point about at least touching on the arcs of the minor characters. Their arcs might not be completed–especially if they’re getting their own story in a sequel–but a mention lets readers know we haven’t dropped the ball. 😉

Thanks Jami! College has just ended and I have a chance to read your posts again.
The final scene is so important as you explain; too many writers don’t know how to wrap up the threads. I really dislike cliffhangers although if a certain section of the story has been concluded I can accept this abrupt ending.

A romance book formula has a proposal at the end of the last chapter, say Chap 15, and a lengthy epilogue describing either the wedding or a family scene a year or so later with a baby. I generally regard this as Chapter 16, not a real epilogue (which would be brief and to the point). What do you think?

I’m not a fan of cliffhangers either, and I’ll get them only if I have strong recommendations about the books. But at the very least, I don’t want to be surprised by one! That’s a “great” way to create unhappy readers. *rolls eyes*

The romance “formula” no longer requires a proposal and/or epilogue (especially with some going for a more-casual Happily For Now ending), but you’re right that they’re still fairly common, especially in some subgenres of romance. In my posts about epilogues, I mentioned how there are “epilogue-ish” endings, that provide the opportunity for more of a wrap up without the frequent tone and/or setting jump-shift of a true epilogue. And as you mentioned, those types work just as the last chapter, and I agree that an ending only needs to be labeled as an Epilogue in certain circumstances, such as if we want to prepare readers for a bigger jump or change. Thanks so much for the great comment!

P.S. I hope college is going well for you! 🙂

College is going great thank you; highly enjoyable and the lecturers seem pleased with me so far.

I think writers are admonished to “get in and get out quickly” with endings. I agree that some books seem to need an epilogue. I like an epilogue in romance.