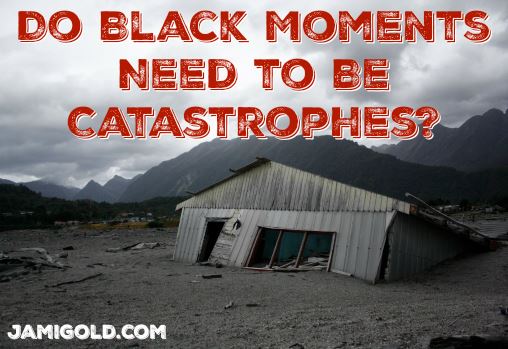 If you’ve followed my blog for a while, worked with beat sheets, or studied story structure, you’re probably familiar with the idea of a Black Moment turning point around the 75-80% mark of our story. If not, a Black Moment is an event in our story that steals the protagonist’s hope for a solution.

A story’s Black Moment (also called the Second (or Third) Plot Point, Crisis, or “All Is Lost” point, depending on the story structure system) is usually one of the most emotional sections of a story, as our heroes despair and give up. We can probably all think of several examples of Black Moments in books we’ve read or movies we’ve seen.

Is our story doomed if it doesn't have a big Black Moment? Click To TweetHowever, not all Black Moments fit into a single style. Many Black Moments that stick with us are “loud,” and that can make writers with “quiet” Black Moments in their stories despair.

Are they doing something wrong? Should they completely change their plot to create a more catastrophic crisis point?

What Are Black Moment Events?

As I shared in my guest post about translating story beats to any genre, in a romance, the Black Moment is often the “boy loses girl” plot point. They lose trust in each other and/or the potential of the relationship and break up, have a big fight, expose lies, etc.

In my Mythos Legacy novels, the Black Moments are fairly “loud,” as they include betrayals, abandonments, kidnappings, soul-crushing shame, etc. It seems like the couple can’t reach their Happily Ever After.

In other genres, an event similarly makes the protagonist give up or fear they can’t win:

As in the examples above, the Black Moments that stick with us tend to be catastrophic. Maybe the antagonist is bigger, stronger, or more pervasive than the protagonist thought. Maybe the protagonist has been betrayed. Or maybe they just lost their mentor.

We might even say the protagonist symbolically “dies,” as they’re stripped of their hopes, goals, or plans. The characters will seem further from their destination (goals) than ever, and in many cases, readers shouldn’t see a solution either.

Yet not every type of story includes a catastrophe. For example, some stories are more about a character’s emotional journey than critical plot events. Stories in the romance genre might not include a break-up scene or other type of major loss.

No matter the genre, protagonists doubt their ability to succeed, but escape any devastating obstacles. They simply lose hope in potential—potential of a relationship, success, teaching humanity to be better, etc.

In fact, these Black Moments can be so “quiet” that they’re hard to identify. As readers, we might not notice. As writers, however, we might be concerned that our story is “broken.”

Making Our Black Moment Work for Our Story

Guideline #1: Tell the Story We Want to Tell

The worst thing we can do is try to force the wrong style of Black Moment into our story. If a horrible catastrophe doesn’t fit our story, we shouldn’t try to shoehorn one in just because that’s what we’ve heard about Black Moments.

Just as every story has different tones or moods, our story has a unique style that includes the type of conflicts, obstacles, and stakes our characters face. Some stories’ styles go big, with life-and-death stakes and “loud” Black Moments, and some stories don’t.

Guideline #2: Fulfill the Story Purpose of the Black Moment

A Black Moment triggers the protagonist to lose hope, but what that looks like can be very different depending on the style of our turning point. Essentially, we need an event that forces the protagonist to leave some aspect of their old life behind, kicking off the change necessary for the story ending.

Whatever happens (and however those two types of focuses are combined), the protagonist is so devastated that they give up despite the consequences. Those stakes that have been carrying them through the rest of the story aren’t enough to force them through this defeat. They give up.

Understandably, these “loud” Black Moments typically require pages or even a whole scene or two to explore, as the catastrophe (a break up, betrayal, death, monster escapes capture, etc.) occurs on the page. The fallout from that event can take even more pages or scenes, as the protagonist deals with the depression, loss of hope, plot consequences of giving up, etc. that results.

Whatever happens, the protagonist doubts their ability to succeed and at least fleetingly thinks that they should just give up because it’s hopeless. The plans they have for how to move forward are obviously not going to work, and now they feel incapable of figuring out a Plan B.

Not surprisingly, these “quiet” Black Moments require far fewer pages to explore. The trigger for their doubt might be only a paragraph or a page or two, and the fallout from that trigger—as they struggle with feeling like a failure—might be only a few paragraphs or pages before they rally and vow to change their approach and redouble their efforts.

Guideline #3: Fulfill the Reader Purpose of the Black Moment

The turning points in our stories aren’t just there for storytelling purposes, kicking off the next section of the story. Story structure has a reader purpose as well.

The reader purpose of the Black Moment is to make readers more emotionally invested in the story.

For example, in a romance without a catastrophic “boy loses girl” scene, the Black Moment may simply be another step of the couple’s romantic journey into a relationship. In those types of stories, readers might never question whether a couple will make it due to a catastrophe, but one or both partners will struggle with the idea of couple-dom.

Stakes are the consequences of failure, and Black Moments show our characters’ biggest failure. So learning how to strengthen “quiet” stakes might help us strengthen our “quiet” Black Moment as well.

Here are 7 ways to make even “quiet” Black Moments work for our story... Click To TweetBig stakes—even “blow up the Earth” big—are meaningless to readers unless they’re given a reason to care. We could read about the entire Milky Way galaxy succumbing to a black hole in a story and not feel a thing.

With either style of Black Moment, the protagonist’s wounds, flaws, and false beliefs should be fully on the page, contributing to their self-image of failure.

We just need to give a sense of a dead end for at least a few paragraphs to build enough bare bones of a Black Moment to fulfill the function.

Guideline #6: Show the Effects of the Black Moment

No matter the style of our Black Moment, our story needs the context for the effect of the trigger on the page so readers know how to feel. If our characters don’t seem to care or react to a Black Moment, the required turning point does not exist, no matter how “loud.”

Guideline #7: Ensure a Point of No Return

As those guidelines above show, not every story needs a catastrophe to drive the changes of the last act. Sometimes a low-key trigger will be enough to force characters to doubt and later rally.

If our Black Moment isn’t working, rather than trying to increase the scope of the trigger, we might be better off to increase the emphasis of the fallout from the trigger we have. We can emphasize the effects, the protagonist’s despair and sense of failure, how this is a point of no return, etc.

Or as Clare O’Beara points out in the comments below, the contrast of emotional highs and lows helps with emphasis as well. So if the moment before our “quiet” Black Moment is extra happy, any fall will feel stronger.

As long as we’re fulfilling the functions of the turning point, the right amount of emphasis will make any Black Moment impactful. When a “quiet” Black Moment makes sense for our story, it’s good to know our story isn’t broken. *smile*

This blog is the place to come for nuanced advice. I am most grateful. I spent last week trying to come up with a hook for my first page. It now sits like a hulking gargoyle. I think it can go. But, I was trying so hard to follow advice exactly. Your blogs remind me to go with what feels right — what works for me.The black moment. I was just about to work on that. I feel less pressure now to come up with something that fits common advice. You point out the principle involved.

Yes, I try to emphasize the nuances of situations a lot. Story flow: What feels right–storytelling-wise–is sometimes most important. 🙂

Nicely written and thanks! Some stories tend to be all about a linear drama where the character just keeps going. There is no emotional strength in such a tale.

Good point! We want to mix emotional highs and lows in our story, as contrast can be a great way to emphasize.

For example, if we have a super-high point right before our “quiet” Black Moment, any fall will feel extra strong. Thanks for sharing that insight! 😀

In fact, Clare, this is such a good point that I added your insight to the post itself in the final section. Thank you!

Glad to help! Your blog is a great package of advice.

[…] Structure: As my post about quiet Black Moments from last time demonstrates, the more we understand story structure and its purpose, the more we can make it work for our […]

Top Picks Thursday! For Writers and Readers 04-05-2018 | The Author Chronicles

[…] Structure is the hidden skeleton that supports your story. Mary Kole shows how to write compelling opening pages, Peter Selgin demonstrates how to craft setup and payoffs in scenes, Lori Freeland says to frame your scenes with essay structure, and Jami Gold explores if a story can still be compelling with a “quiet” back moment. […]

Interesting! For some of my stories, I wasn’t even sure if they had a black moment. ^_^” So maybe their black moments are the quiet kind.

Quiet black moments can be perhaps a page of self-doubt or some other emotional turmoil? (E.g. A hero wondering if he and his partner are truly right for each other, as they have so many differences in their attitudes and beliefs. So he stews in feeling sad, kind of depressed, maybe scared, but later rallies and decides to give their relationship another shot.)