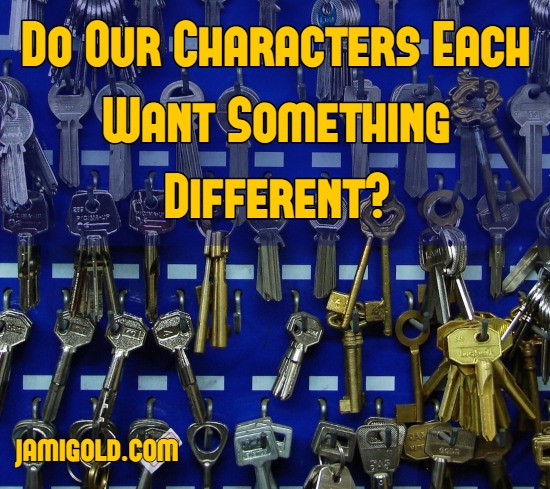 Last week, I shared my Resident Writing Coach guest post over at Writers Helping Writers and talked about how weak or passive goals in our story can hurt us. Then we dug more into weak goals—how they can sometimes help our story and how we can turn them active over the course of a story.

The concept of goals gets even more complicated if we’re talking about stories with multiple protagonists. As a romance author, I’m going to explore this from a romance point of view, but the same ideas can apply to any multiple-protagonist story (or sometimes even a single-protagonist story with a layered character). *smile*

In stories with multiple protagonists, the characters can have very different goals. So how do goals—passive or active—work with a romance or multiple-protagonist story? Let’s take a look…

Any time we have multiple characters, we’re going to see multiple goals. Even a “spear carrier” waiter in a restaurant scene might have a goal, such as to provide a service that meets a customer’s needs.

Usually, we’ll use different characters’ goals to conflict with our protagonist’s goal. That’s the definition of an antagonist.

What are the various ways we use goals when our story has multiple protagonists? Click To TweetAntagonists aren’t necessarily a big bad villain—they’re anyone with goals conflicting with what the protagonist wants. If we’re writing well-developed characters, virtually every non-protagonist character is likely to be an antagonist at some point of the story.

Occasionally, characters will coordinate their goals to overcome a common problem. Romantic interests, best friends, or sidekicks/mentors will sometimes have similar goals to our protagonists—not exactly the same, but similar.

Either approach can work, but for the latter idea of coordinating goals, we need to ensure that we have enough other conflict to drive the story. For example, in a plot-focused story, it might be less important for our main characters to be in conflict with each other, as everyone might instead focus on overcoming the villain and the conflict they bring to the story.

In multiple-protagonist stories like romance, we face the same conflict-or-coordinate issue. However, unless we’re writing an anti-hero, multiple protagonists mean that readers are rooting for positive outcomes for both/all of our protagonists.

In other words, readers might end up rooting for outcomes where both protagonists can’t get what they want. To prevent readers from being disappointed with the protagonist’s final “failure,” authors of multiple-protagonist stories might need to take extra care in laying the foundation of alternative goals through foreshadowing and subtextual longings, etc.

For example, in a romance, the characters might both be competing for the same promotion. Obviously in that type of situation, only one can “win” in the end.

Conflict in the Romance Genre

Balancing conflict in romance is a big topic I’ve written about before:

“The characters have to be perfect enough for each other to make a believable couple, but there also has to be enough conflict between them to sustain a story.”

The protagonists in a romance should be antagonists to each other. Remember that virtually every character should be an antagonist—because any fully realized character will have their own goals.

So in a romance, where both characters are protagonists, they both should be well-developed enough to be individuals with different ideas about how to live their lives. Yet we also need to keep their conflict at a level that allows readers to believe their eventual relationship is healthy.

Three techniques can help us find that balance in romance conflict:

Another way of looking at conflict in romance is identifying whatever is keeping the couple apart. Whatever they want and can’t have is a source of conflict.

So what does all this have to do with using passive or active goals in romance? *smile*

With two protagonists, we might have a combination of passive or active goals. That gives us a ton of flexibility for driving a story.

Both of our characters might start with passive goals. That means they’re both not looking for things to change, at least not initially.

Last time, we talked about how a character might change their mind about sticking with the passive goal during the Inciting Incident, the First Plot Point, or anytime during the first third of the story. (Or if their goal is to more seriously cling to their passive goal, they might not decide on an active goal for even longer.)

When we have two characters with passive goals, we have an opportunity to mix up how long they each take to switch to a more active goal. Whereas a long-termed passive goal can be tricky with one protagonist, two protagonists allow us to keep one character’s goal passive over the long-term and give the other a quicker change to an active goal to avoid potential pacing issues.

Similarly, both of our characters might start with active goals. They both actively want to pursue something and overcome obstacles from the first page.

Stories with active goals often feel stronger, both with conflict and with pacing. With two protagonists with active goals right from the beginning, our stories have a chance of a double shot of strength to grab readers’ attention.

As I was planning out this post, I realized that the story of mine that won the biggest awards, Ironclad Devotion, also features the strongest examples of this two-active-goal setup of any of my stories. Coincidence? Maybe. Or maybe not.

Those are both active goals, and they’re fighting over the same thing: custody. Active goals are a great way to start off a story strong, and two active goals—especially when in conflict—makes for a very compelling story beginning.

Option #3: One Passive Goal and One Active Goal

In romance stories especially, we can have fun with this alternative. One character’s active goal might even involve pursuing the other character for a relationship. Or they might trade passive and active status back and forth.

For example, in my story Treasured Claim, the heroine (a dragonshifter) starts with an active, life-or-death goal: “acquire” jewelry from the guests at a fancy party to prevent her death. Her goal soon shifts to another active goal—to escape—once she’s caught by the hero, but afterward, she’s temporarily satisfied and no longer has an active goal.

On the other hand, the hero’s active goals start on a smaller scale, as he pursues her. His pursuit gains in strength as he wants to prove to her they can be a couple, and that goal is enough to carry the story through her time of passivity.

In other words, this third alternative allows us to explore whatever passive goals we want with one character, while the other character’s active goal keeps the story and pacing strong.

Have you written multiple-protagonist stories? Did you find that made it easier or harder to ensure active goals carried your story forward? What combinations of active or passive have you tried? Is there a combination you’d like to try but haven’t yet? Do you have any questions about using goals with multiple protagonists?

Great food for thought, as your post always are!

On mixing passive and active goals for multiple MC stories, I find that some of my MCs are clearly more interesting than some of the others. This may partly be because the more interesting characters are less happy, less satisfied, and more desirous of changing their circumstances. Maybe this is why characters with a sadder or darker past, tend to be more riveting than characters with a happier past. When you’re happy, you’re more complacent and less motivated to change the status quo, right? But when you’re sad or distressed, you would be more motivated to change your life.

Of course, even characters with a happy past, can encounter or discover problems that urge them to change. For example, a generally happy character is in a satisfying relationship. But their partner suddenly says that they’re upset with them for being such a poor listener, and feel neglected and emotionally deprived. The happy character might get defensive, or maybe they may (sooner or later) take their partner’s concerns seriously, and learn to be a better listener to their partner.

Okay Jami; I’ve been reading your blog posts for years. This one tweaked my lifelong interet in Cognitive Psychology and Organizational Behavior. It also made me buy one of your books to see how you work out that Active vs Active Goal thing. I find your definitions of Passive and Active goals intriguing. For years as a Poblem Solving Group leader I had to blast workers and managers out of their instinctive resistance to change and motivate them to cooperatively seek positive Ohange. You girls who write romance (I’ve written some, from the guy’s perspective) have an advantage. You seem to more instinctively understand organic human psychology. Maybe it’s the internal dialogs that you seem to sustain. My wife is usually thinking/debating so loudly that sometimes I ask her what she said. However, as I read this blog post I think about real people. I”m Ghostwriting Biography now and real people are never that simple. We are all filled with conflicted goals, even the “brain dead” party animals among us. Humans are by nature Conservative, we hate change (attenuated to a degree in we HDADD adrenelan junkies). That’s a big factor, paralyzing frequently, as an inborn Passive goal. About the only factor that universally overcomes that Conservative impules is Sexuality. I’m not a.Freudian. Romantic Sexuality and Passion is humanity’s primary driver for change, both good and bad. Actually Sexuality is the driver that creates Civil Society and nearly all human progress. Love holds everything human together. So we romance writers…  — Read More »

I’ve chosen to have only one PoV in my current romance project: the male lead. His goal is directly opposite her goal, at the beginning. At Turning Point 1 (Opportunity), they meet and his goals shift. He still has his first goal, but now he has an additional goal to fulfill as well. If I count her goal at the beginning, that’s three active goals.

Which brings me to my questions: can there be too many goals (for one character, or for the story as a whole)? If a passive goal can drag a story down, will too many active goals make the story feel cramped, rushed, chaotic (or all of the above! *grin*)?

Thanks for always making me think! I’m here almost daily, reading (or rereading!) a blog post. *Your* blog is the first one I send writers to, when they ask for writing help and resources. You take the abstract concepts I know I *should* understand but don’t, and you make them more concrete.

[As an aside: In my head, I see you holding a huge mass of helium-filled balloons on long strings, each covered with a writing concept. Instead of handing them out, you walk over to a series of cement blocks and anchor each balloon to one block. Then, you explain them one by one. You bring writing down to earth for me. Thank you.]

Thank you for the great question, Anne! You inspired a whole post for my answer here. 😉