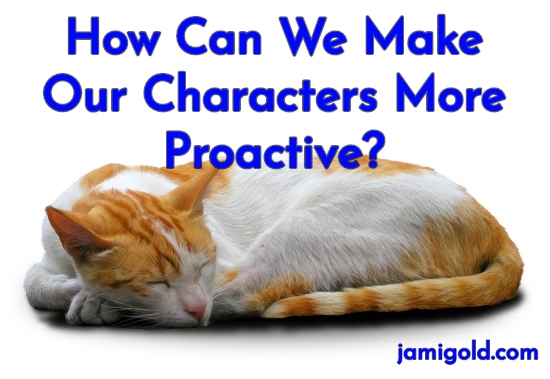 As I’ve mentioned before, agents and editors often talk about how characters need to be active (or proactive) rather than reactive or passive. That advice especially applies to our protagonist.

But new writers often struggle with what that idea means:

Should characters cause their own problems? Is the plot not allowed to happen to them?

Let’s first look at what it means for a character to be proactive and why it’s so important for our protagonist. Once we understand that, we can look at how we can fix a protagonist who isn’t doing enough in our story. *smile*

Do Our Characters Have Agency?

To understand what we mean when we talk about whether a character is proactive, consider whether or not they have agency. How much are they “allowed” by the plot or story to make decisions and/or take actions that matter?

In other words, passive and reactive characters—those without agency—go with the flow, make no decisions, and don’t affect the story because they’re always one step behind. In contrast, proactive/active characters make the story what it is.

Or as Chuck Wendig explains about character agency: (as always with Chuck’s work, language at that link)

Why Do Characters Need to Be Proactive?

As alluded to above, one reason why it’s important for a protagonist to be proactive is to avoid the problem of a character being unimportant to the story. We don’t want the character just seeming like a puppet to the plot, such as when we want A, B, and C to happen in our story, even though the steps don’t ring true for our character.

A puppet-style character is a sign of shallow character development, and they won’t feel real or three dimensional to readers. In turn, readers won’t feel as strong of a connection to them or care as much about what happens to them—making readers more likely to abandon our story.

In addition to that problem, there are two other essential reasons to ensure our protagonist is proactive. Let’s take a look…

We might have heard the phrase that “plot reveals character.” That refers to the idea that plot events are the triggers forcing choices and changes in our characters.

Why are protagonists who are too passive or reactive a problem for our story? Click To TweetThose choices and changes are evidence of their agency. They’re facing obstacles and deciding how to move forward—i.e., being proactive.

But focus on that “reveals” aspect of the phrase. Readers learn who our character is by watching them face obstacles in the plot.

If our characters never decide how to move forward, not only are they not proactive, but that’s also a sign that we’re not showing readers who our characters really are. A proactive character reveals themselves in how they face choices, what decisions they make, and how they move forward toward their goals.

As I’ve discussed before, many different writing and craft elements contribute to our story’s pacing. Several of those elements tie into where our character falls on the proactive vs. reactive scale:

In short, proactive characters have stronger goals, which automatically strengthens the pacing in our story, gives our characters reasons for their actions, and helps readers relate to them.

Is a Passive Character Really All That Bad?

It’s not always easy to create proactive or active characters, however. So even after all those reasons, we might still wonder if a passive or reactive character is really as bad as agents and editors make them out to be.

Many ancient Greek and some Shakespeare stories revel in this exploration of fate and our inability to affect events, and fittingly, the characters in those stories are puppets and not well-rounded. Unless we’re following that model, our protagonist needs agency and the opportunity to make choices about how to move forward and overcome obstacles.

If they’re not striving for a goal, the tension, conflict, narrative drive, and readers’ worries about the possibility of failure all suffer, weakening the pace. Without goals, characters won’t have a strong motivation for why they do what they do, making them feel more like a puppet to the plot, affecting how readers connect to them. Simply, stories with reactive or passive characters are weaker than they could be.

How Can We Make Our Protagonist More Proactive?
Part 1: Understand Why They’re Not

First we have to understand why our character is passive or reactive. Sometimes, it’s just that our protagonist doesn’t have as strong of a goal as they could. In those cases, we can simply beef up their goal to give them something to strive for that affects their choices, situation, and the overall story.

Why do some stories struggle to create proactive characters? Click To TweetBut one of the most common reasons for reactive or passive protagonists is that our story premise makes it difficult to let our character try to solve the story problem. This is often the case when the main conflict occurs outside the protagonist’s existence in the story world, such as when the villain is working on their bad-guy plans beyond the protagonist’s awareness.

If our protagonist doesn’t know the villain even exists, they can’t react to or prevent the plans from progressing. As a result, they’re more reactionary simply due to how the story plays out. In other words, it’s hard to make our protagonist proactive—or even just active in relation to the story problem—if our character isn’t aware there’s a problem to overcome.

How Can We Make Our Protagonist More Proactive?
Part 2: Explore Options

In cases where our protagonist is in the dark, how can we make them more active or proactive?

In other words, even if our protagonist isn’t exposed to our main conflict or villain, they might still be exposed to one or more hints of the actions our villain is taking or the events occurring as a result of the main conflict. They might see something out of place, hear gossip or a news story about a mystery or unusual event, etc.

From a story structure perspective, the idea is to move the point where the protagonist’s goals overlap with or relate to the main story problem as early as possible, preferably by the 25% mark (or the 50% mark at the latest). That way, our protagonist’s non-main-conflict-related goals that sustain them earlier in the story don’t have to carry a huge portion of the book.

(Note: I explore another option for making our protagonist more proactive—by working outside our story’s main conflict—in my follow up post here.)

How Can We Make Our Protagonist More Proactive?
Part 3: Give Them a Choice

We want to find a way in our story to give our protagonist enough information that they’re faced with a choice in regards to the main conflict. Maybe they dismiss the hints or rumors. Maybe they investigate to learn more. Maybe they ask others for input.

How can we make protagonists more proactive (in any type of story)? Click To TweetThe what doesn’t matter. We’re not expecting our protagonist to take up the charge against the big story problem when they still don’t know it exists. Often with this type of story premise, the idea requires our character to remain in the dark for a while, and that’s okay.

The point is the choice. Even just a smidgen of information gives our protagonist the choice of whether or not to interfere with the main conflict or the villain’s plans (even if unknowingly). No matter how they react, they’re now leading where the story goes with their choice, and that makes them more proactive. *smile*

So, Luke can’t just be some guy who stumbles into the Rebellion, he’s someone who wanted to join it for years. Although he only chased after Leia’s droids to drag them back to the farm, and then left with Ben because the farm wasn’t there anymore.

Hmm. I think reactive is how the main character in my first novel is. I knew he was wishy-washy when I wrote him. But in my mind, he was never the most important person in the story. He’s really the lens through which we see the second main character and also helped propagate the mystery that this second main character presents. Only time will tell if I made the right choice.

Great tips, and tips I will definitely keep in mind when I write book two where this second main character really is the main character.

Sorry once again for being so MIA 🙁 Life has gotten incredibly busy, and my time management skills have not improved a single bit.

About protagonists that are passive vs proactive, I’m glad you covered the case of the villain working out of sight at the beginning! It’s a good tip to see how your character responds, or how they choose to respond, to some signs of the villain’s activity. Even if a character chooses not to engage (e.g. ignoring the strange sounds coming from the neighbor’s house, not wanting to investigate), it shows you something about the character as a person.

Thanks for this! I think it really helps in developing secondary characters as well. When we really spend the time considering the often conflicting motivations of the characters the story gets richer and has more conflict. Even a “stuck” character has some hidden reason for staying stuck or being passive and that willful stuck-ness can drive a plot too but I agree that it’s easier to not make that person the main protagonist.