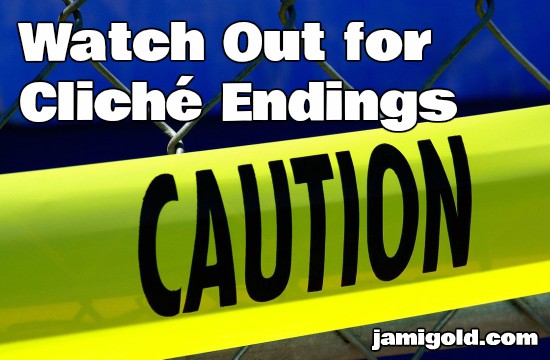 Over the last few weeks, we’ve been talking about story endings:

After all that, I thought I was done with the topic of endings and epilogues, but a couple of days ago, a Twitter thread by author Bree Bridges (one half of the Kit Rocha writing team) brought up a related point about reader expectations. So while I wasn’t intending to do another post, I want to talk about the fuzzy gray area between “fulfilling our story’s promise” and giving readers a cliché ending.

What Do Our Readers Expect?

As Bree mentioned, for some readers of the romance genre, to meet the definition of an HEA (happily ever after), the ending or the epilogue must include a wedding or baby (or both). For those readers, anything less results in the story just feeling like an HFN (happily for now) ending—which isn’t quite the same from a reader-satisfaction perspective.

Obviously, for readers who feel very strongly about what’s required for a satisfying ending (no matter the genre), we might not be able to keep them happy. Especially as there’s not a single agreed-upon list of requirements:

There’s no “one right answer” to those—or similar—questions. While we do want to keep the reader’s experience and emotional journey in mind with our storytelling, the details of what will provide a sense of closure for readers can be very individual.

In other words, just as with any other aspect of our story, we’re never going to be able to make everyone happy. So rather than feeling like we have to deliver a too-neat ending that might feel cliché—such as babies or the villain’s death—we should also think about what’s right for our story.

Some of the problems mentioned in the first post about epilogues might be connected to a too-cliché ending. The simple fact of certain endings being clichés can make them feel too neat-and-tidy. Instead of relying on clichés, we should match the needs of our story, as long as that will create the right emotional journey for readers.

Can we fulfill our story's premise while still avoiding cliché endings? Click To TweetWhat kind of ending is “enough” to provide the type of reader experience we want … for most of our readers? Unless we can read minds, that’s a tricky balance to keep. *smile*

That’s why, on some level, we have to forget reader expectations enough to not feel obligated to slap on an ending that wouldn’t match the rest of the story. The “right” ending greatly depends on not just our genre, but our subgenre, characters, plot, mood/tone, and story.

Romance, especially, can be hard to navigate. Romance fans are all too familiar with the genre as a whole being denigrated for being cliché, merely for the fact that it—by definition of the genre—has a happy ending with the couple together. Of course the genre has expectations—the mystery genre expects the mystery solved and the thriller genre expects the bad guy stopped too.

Genre expectations are not cliché—they’re what define the genre—and the promises at the heart of the genre are not what we mean by cliché. Here, we’re talking about a cliché not in simply a generic “happy ending” way that so many throw at romance as an insult, but rather as specific expectations of what that happy ending must look like.

In our own lives, we get to define what “happiness” looks like to us. Some of us want caring family and friends, some want power or prestige, some want a fancy house or vacations, and so on.

The same should go for our characters. As Bree says in her thread:

I have never subscribed to the “it’s a HFN without marriage/babies” thing because I think HEA is when people decide to do this thing as partners and define, together, what “this thing” looks like for them.

When I shared her thread on Twitter, I mentioned that, to me, HEAs are about being committed to a loving partnership. That means the reader needs to see the couple overcome their disagreements and working together toward common goals.

That said, some of my stories do end with a proposal (or a yes to an earlier proposal). Some of my stories do include conversations about kids. So far, none of my HEA-ending stories have a wedding or babies epilogue, but that’s far less common in my subgenre of paranormal romance than in other subgenres anyway.

Some characters I write don’t care about proposals or kids, so it wouldn’t fit to tack that onto the ending. There’s nothing wrong with those stories or characters as long as the story still delivers on its promises to readers.

There should be a bit of gray area between story promises and cliché endings for us to play with. Stories would be boring if they all ended the same way.

Besides, as Bree points out in her thread, cliché endings can be problematic. The romance genre’s baby epilogue implies that women must “achieve” motherhood to qualify as happy, as though women who choose not to (or can’t) have babies have “failed” in some way.

Obviously, that’s seriously messed up. Women have more to offer than just their ability to carry babies, and that goes for our stories and real-life society. (And I’m a big believer in using romance stories to model healthy perspectives. *smile*)

Avoid the problems of clichéd endings by focusing on the story and characters. Click To TweetOther genres’ cliché endings can be messed up as well. They might justify a need for revenge to feel satisfied, require our hero to be a killer, etc.

Forcing a cliché ending can break our story, destroy its mood/style, or undermine its themes. Forcing a character to accept motherhood or kill off the villain to “win” can warp the sense of proactiveness and character agency we’ve developed throughout the rest of the story.

Just like us, our characters should have the right to define what happiness or success means to them. And that means that we should try to find the happy place between delivering on our story’s promises and succumbing to clichéd expectations.

Have you read stories with endings that felt too clichéd? What made them feel that way (was it too generic or did the ending not fit the story or characters, etc)? Have you felt pressured to write a clichéd ending to keep readers happy? Do you think we should write the clichéd ending anyway, even if it undermines our story or characters? Do you have tips for how to avoid a too-clichéd ending while still delivering on a story’s promises?

About romances, I want to point out that LGBT+ romances may have different expectations. Yes, many of them do end in proposals and /or babies (like from adoption), or at least they propose later on in the series. However, there is a sense that gay couples do not have an obligation to marry. There seems to be more acceptance for couples who want to stay as unmarried lovers. Gay marriage may not even be legalized in their country, era, or society.

Ugh yeah I do feel the pressure to do a neat ending for my romance, which is difficult because I have the action-adventure plot to wrap up, as well as four couples whose emotional journeys will take a while to resolve themselves. I think I can only do a HFN, though, because I believe that couples will always encounter disagreements and dissatisfactions, so they have to conquer the obstacles one by one. So I could just show them conquering their current obstacle. It’s hard, however, because there are FOUR couples. I want to make sure they don’t feel like robotic duplicates of each other, if you get what I mean. (All four of them have different relationship problems, so they wouldn’t literally be duplicates, but I don’t want readers to feel that they are too similar to each other or formulaic.)

Oh yes! Great point about how LGBT+ romances have different expectations. Thanks so much for chiming in with that insight! 😀

[…] Is the end of your story in sight? Jami Gold examines creating satisfying endings without clichés. […]