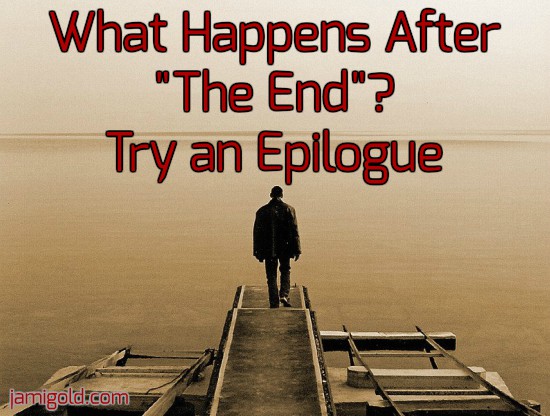 We’ve talked before about whether a prologue would help or hurt our story. At the other end of a book, we might face a similar question about whether our story needs an epilogue or not.

Epilogues aren’t quite as reviled as prologues, but some people do fall into the “don’t like” camp. So let’s take a look at epilogues: how they differ from normal endings, what they can do, and what they shouldn’t do.

Before exploring epilogues, let’s first talk about a normal story ending, so we can understand the difference.

In a book without an epilogue, the story reaches “The End” after the Climax is resolved, and the main story problem or core conflict, subplots, and story arcs are wrapped up. Depending on the story structure system we’re used to, we might call this post-Climax aspect of our story the Resolution, Falling Action, or Denouement.

Will an epilogue help or hurt our story? Check the pros and cons... Click To TweetThis part of the story is essential, in that the story’s arcs wouldn’t be complete without it. Therefore, it’s treated as a normal paragraph(s), scene(s), or chapter(s) of our story.

For example, if our story is a mystery, the Climax is the reveal or apprehension of the bad guy. However, there are often still story arcs to wrap up in the denouement:

All together, those elements are meant to give readers a satisfying ending to a story that feels complete. Without those additional tidbits, the ending would feel abrupt and leave major arcs hanging.

Imagine a novel that ended with something like this:

Velma ripped the mask off the killer’s face. Gasps sounded from the gathered onlookers. It was Brett.

Unless our story was really short, that type of ending wouldn’t feel right. Even Scooby Doo’s cartoon episodes include more of a resolution than that. *smile* While we don’t need (or want) every story thread wrapped up in a perfect bow, we’d want to know more if faced with an ending like that, and that’s what the denouement is for: resolving the story.

With an Epilogue Ending…

In contrast, an epilogue comes after the denouement. Epilogues usually show how story events affect characters after some time has passed.

For example, going back to our mystery:

Is it necessary to show readers that she’s successful in her new position or that her relationship is happy? Usually not.

As authors, we might find it best to point our characters (and readers) in the direction to go next, but we don’t need to actually show them in that future. The epilogue is an opportunity to add a bit of a happy, perfect bow to story threads, but readers don’t need that glimpse.

In other words, the difference between a denouement and an epilogue might be:

The example above exposes several of the risks of epilogues:

Given those risks, why would we ever include an epilogue? It all depends on the story.

For some stories and genres, a neat, tidy ending would feel out of place or be too cheesy. Maybe the mood of the story deserves more uncertainty or bitter-sweetness. However, for other stories and genres, readers would benefit from an extra push to think of our characters’ futures a certain way.

While a prologue might prevent a reader from buying our book—as they flip through our opening pages—an epilogue isn’t likely to prevent our story’s purchase. However, given the saying that the ending of our story is what sells our next book, epilogues can be important to the success of our series and other books.

With a deeper understanding of what role epilogues are meant to fill, we’ll know better whether an epilogue might fit with our story. And with this list of pros and cons to watch out for, we’ll know better how to make any epilogue we write match our intentions. *smile*

Join Jami in a workshop to learn how to do just enough story development to write faster, even if we write by the seat of our pants.
Click here to learn more!

Do you like epilogues as a reader? What types do you like or dislike? Have you written an epilogue for any of your stories before? Or have you debated adding an epilogue? Does this post help clarify what they’re good for and when we should avoid them?

In the romance genre, I think epilogues are necessary. When an author does NOT include one (a small look into the future) there are usually MANY complaints in the reviews, especially when the story just cuts off abruptly. You have to supply the reader with a sense of closure – the kiss is NOT the end of the story, sorry. It’s jarring. You would think these successful writers would include an epilogue, or their beta or alpha would suggest one.

Anyway, when a writer structures their story to include that little after-story wrap-up within the story without needing an epilogue (that’s usually what the last chapter is, many times) the story feels much more complete. I think it’s less the “epilogue” form so much as the giving the reader a little bit more so that it feels more like a real ending.

This is so true about the genre of romance. I’ve rarely come across one that felt as though its ending dragged on too long. In contrast, at least a third or even half of the romance stories feel rushed for their ending.

Whether it’s an official epilogue or just an epilogue-ish scene, as you said, stories benefit from a stronger sense of closure. And given that common comment in reviews, we’re not the only ones who think so. 🙂

This is a great summary/explanation of the use of epilogues.

I use them in one of my mystery series. They fall into the more wrap up category most of the time. It’s hard to naturally get all the loose ends tied up in the denouement. Especially since sometimes not all the “evidence” has come to light yet. Also, my series’ protagonist is involved with a different veteran with each story, so sometimes the epilogue also shows what’s happening with that vet down the road apiece.

Those are great insights into more things we can focus on during an epilogue. Thanks for chiming in! 🙂

Great summing up and examples.
I almost always dislike epilogues because they are actually the last chapter. If they were called the last chapter I would not mind. I almost never read prologues, especially not ones that are lengthy or in italics. Epilogues tend not to be in italics.

I like epilogues being called epilogues if there’s a time break, as the title of the scene prepares readers for the jump–especially if the jump of time and circumstances is significant and less just a “what comes next” scene. However, if it’s a continuation of the cause and effect chain of the story, and there’s no significant jump, I agree there’s no need to call it out as an epilogue rather than just the final chapter.

That’s how I handle it in my stories, in fact. The last chapter is often epilogue-ish in feeling, but it’s really just about the characters taking their first solid steps in their new life, an additional statement of commitment, etc. So it’s enough of a continuation of the story that it doesn’t need the epilogue title. Thanks for sharing your thoughts! 🙂

[…] Two of the most important parts of your novel are the beginning and the end. Kathryn Craft discusses how to rock an anecdotal opening, while James Scott Bell explains how to mess up your lead character’s ordinary day right from the start. Jami Gold tackles the opposite end of the book, with a close look at the pros and cons of epilogues. […]