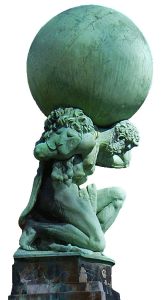 Last time, we looked at a simple list for What Makes a Female Character Strong based on The Female Character Flowchart.  But if that list is so simple, why does it seem so difficult to create a strong character?  Why do so many fail and fall into stereotypes?

Maybe because the list is made up of simple points, but it isn’t so simple to implement.  So let’s look at how to make sure our characters—male or female—embody each of those traits.  First up…

Can they carry their own story?

Well, first of all, they’d have to have goals of some sort to create a story for them.  At the most basic level, a story is the journey from Point A to Point B.  So to have a story, a character needs a Point B in their life.  They need goals.  Without goals, that poor secondary character would just be standing around to act as a sounding board for the important guys.

If you’ve studied the GMC (goal/motivation/conflict) structure of scenes, you can probably guess what comes next.  That’s right.  Conflict.  Characters reveal themselves through how they react to conflict.  What are their strengths and weaknesses?  What makes them more than just a cardboard cutout?

In every scene, know the goal and motivation for every character, major and minor.  Let them argue if need be.  My post How to Fix the Infamous Info Dump talked about how showing conflict between characters can help fix info dump passages.  As the characters argue about the pros and cons of different options, they’re cluing in the reader about the situation.  Conflict creates tension.  Tension leads to page-turning stories.  It’s all good.

Do your secondary characters all have their own goals?  Has it helped or hurt your stories?  Did any characters try taking over the story?  How did you handle it?

Great post, Jami! I think the question of could they carry their own story is a GREAT one. Because I’m writing a romance series, I’m always considering my secondary characters for their own book. I think this has inadvertently helped me create stronger secondary characters because of it. When my agent signed me, she listed 3 other people in the story she could see carrying their own novels–so I was so excited that she was able to connect with characters who just played minor roles in the first story.

Yes, that idea of secondary characters spinning off into their own book was kind of in the back of my mind with this.

Awesome post, Jami! You nailed it. When you say:

This is really important when it comes to secondary characters, because I think most times they’re used as props for the main character instead of a good foil or, as you say, an important part of the conflict towards the MC’s main goal or resolution.

I’ll have to think about this some more.

You know, so many of these lessons came because I discovered that if I didn’t listen to my characters, it would piss off my muse and he’d stop speaking to me. 🙂

Great post, Jami! This is something it seemed to take me awhile to learn, and a weakness I see in some other writers’ work. The only danger is sometimes those secondary characters suddenly become WAY too interesting and start to try and hijack the book! 🙂 So long as one watches out for those character hijackers (and makes them wait for their own book, darnit!) more dimensional characters always make a book stronger. Thanks for sharing. Also have to go have a peek at your flowchart too.

Yep, as I mentioned to Roni, the point isn’t necessarily to give the secondary characters what they want. *evil grin* Just don’t prevent them from wanting it.

Then the main characters have that many more obstacles/conflict to deal with and show their strength in return. Like you said, make the secondary characters wait for their own book to hijack everything. 🙂

How to Create a Strong Character: Contrast Their Self-Image | Jami Gold, Paranormal Author

[…] to make sure we’re creating strong characters.  Last time, we made sure that our characters had goals.  Next […]

[…] from the big series on creating strong characters?  To feel realistic, characters need to have goals, a delusional self-image, multiple personalities, flaws, and a reason for their actions.  […]

[…] our way through the list of how to create strong characters.  So far, we’ve ensured they had goals and analyzed how their self-image differs from reality.  And related to that contrast we talked […]

Just stumbled on this blog. Enjoyed this very much! Helpful tips. Subscribing and off to peruse your other articles!

I’m glad you found them helpful. 🙂 I saw you talk about needing to edit this weekend. Maybe check out The Perfectionist’s Guide to Editing post. Thanks for the comment!

[…] it to the end of the checklist for creating strong characters.  We’ve given our characters goals, delusions, lies, and flaws.  Only one thing left could go […]

Great article. I’ve actually stumbled across your page and have been reading your articles for the last hour. Very concise and informative!

Thanks! Let me know if you have any questions. 🙂

[…] almost through with the list of how to create strong characters.  So far, we’ve ensured they had goals and contrasted their self-image and persona.  Next […]