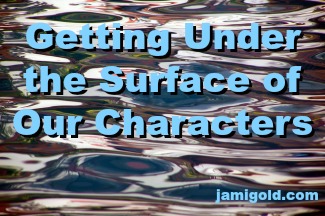 I’ve written many times about how much I love subtext, the stuff that happens between the lines. We often hear that subtext is what’s not said, but that can imply that subtext is limited to dialogue.

In fact, subtext lurks in many aspects of our stories. The messages readers get from our writing aren’t always explicitly stated—in dialogue or otherwise.

We can find implied messages in different story elements, such as:

Each of those elements can “say” something—with implied promises, expectations, or impressions—without coming out and stating the idea directly for readers.

The Benefits of Subtext

When readers put story pieces together in their minds to create a fuller understanding, they immerse themselves deeper into the story. If a story is too “on the nose” or is spoon-fed to us, it can feel insulting, like the author assumed we couldn’t figure it out on our own.

Subtext can also make our characters feel more realistic. As September C. Fawkes says in her fantastic post on subtext:

According to September, subtext also can add tension in our story:

“When we communicate our feelings directly, we lose tension. It’s what’s not being said that creates tension. It creates anticipation and apprehension, keeps us interested because of what’s boiling under the surface.”

But another benefit to using subtext is that it helps us build layered characters. Let’s take a closer look…

Layers and Subtext: The Key Idea

To create the impression of three-dimensional characters, we have to give them layers. What does that actually mean?

We often use shortcut descriptions for our characters: a Navy SEAL, a small-town detective, a space pilot, etc. For spear-carrying type characters, that might be all we (and readers) need to know, but for our main characters, we want them to have fuller personalities and lives so they feel real.

Each of those facets of his life illuminate more about who he is as a person, not just based on his job description. Those facets are layers.

Agent Donald Maass often gives the advice to push our characters into experiencing competing emotions: If they’re happy, are they also sad about something? Those conflicts are also layers.

So where does subtext come into play?

Each facet can create conflicts in our characters.

In other words, the different types of layers interact, and those interactions play out in subtext. All that subtext says even more about our character, leading to the impression of a character who’s more than the sum of their parts.

For example, our Navy SEAL character might have the goal of staying home more because of his little sister, but he might also have the goal of getting the promotion despite the requirement to relocate because he wants the pay increase to get out of debt.

When making a decision, our characters won’t necessarily debate every one of their options in their head, but if we’ve shown those conflicting goals during the story, the subtext for their struggle will exist.

“Subtext happens when the audience comes to a conclusion that explains those contradictions.”

The combination of all those forces acting against our character will play out in what they say, do, think, feel, etc. As the plot evolves, which forces are dominant might change, giving readers even more information about our characters.

Using Subtext to Give Characters Layers

There are a few ways to create layered characters, and each method uses subtext differently. Depending on our goals, we might use one method over another, or we might mix and match our approaches to take advantage of circumstances.

For example, we might want our character to be likable, or we might just want readers to understand where they’re coming from. Or sometimes we want readers to dislike a character without having to go the route of mustache twirling. *smile*

We might also choose different approaches because of point of view (POV). Sometimes we’ll have the benefit of writing from that character’s POV, and other times we have to create an impression in the reader just from the narrator’s perspective. Those differences can change our options.

Characters make choices in every scene. Every action provokes a chosen reaction. They’re faced with a dilemma and must decide how to respond. Each decision creates subtext about the character’s values and the story’s themes.

As we mentioned above, we can supercharge this type of subtext by introducing competing goals for their choices. Will our Navy SEAL choose to reveal his debt to his sister to explain why he’s leaving, or will he try to keep her admiration by continuing to hide it? Will he choose (maybe subconsciously) to talk up his friend’s qualifications to the commanding officer, or will he sabotage his friend’s chances to keep the promotion for himself?

We can also use Character Choices to illuminate non-POV characters. Even without the internal insights of a POV, the choices themselves will give readers information.

The same decision could have radically different subtext depending on the motivation—why they make the choice they do. Motivations add another layer to the character’s values and the story’s themes.

Competing motivations can be woven throughout a story so no one scene has to show the character debating but, but, but…, as they work through every option they’re facing.

Character Motivations are often easiest to use with POV characters, or else we might fall into the trap of a villain monologuing their plans. But even non-POV characters can reveal some of their motivations throughout a story.

Observations by the POV characters provide deep insights into their values, what they long for, what they’re afraid of, and the story’s theme. Character narrators (even the supposedly “reliable” narrators) constantly give readers messages that aren’t explicitly stated.

Obviously this technique only works with POV characters, but even with non-POV characters, we can use dialogue, actions, and body language to hint at their internal thoughts.

For POV characters, the possibilities are endless. We can show competing thoughts and feelings, we can hint at what they’re trying to avoid thinking about or what they’re in denial about, or we can give context for what they’re experiencing.

A character could want one thing but have a competing false belief that they don’t deserve it, etc. Or they could act one way (such as being friendly to another character) but think another (grumbling internally about the other character).

Putting It Together: Types of Layering

All of those ideas above add together to create an impression of the characters in the reader’s mind. And each of those aspects can create a slightly different impression.

So just by looking at how subtext informs readers about our characters, we can identify several types of layering:

In other words, our characters can get pretty complicated…just like real people. *smile*

I find it helps to consider: who is this character & why are they here?

It doesn’t matter if they’re a waitress who will never appear again. Is she a professional who’s just seeking to do the best job she can? Is she desperate for good tips and so stressed she’ll make mistakes? Does she hate her job and not pay as close attention as she should?

With writing a series I’m finding this more and more important. There needs to be a lot of layers to everyone so that I can reveal the different facets of their personalities over multiple books. It’s not easy though and I’ll admit I’ve been struggling to keep certain things subtext so that I’m not giving away too much too soon. My biggest issue right now is how to (re)introduce the main characters while keeping certain things under the radar for now.

Who or what is your point of view?

I personally find that it’s a lot easier to balance what’s under the radar and how when I have a solid hold on the POV.

Great post! The richer the mix without being too heavy the more satisfied the reader. 🙂

Wow, I love this post!!! Oh I want to add that there are “author promises” too. For instance, readers will think that just because the story is written by me, the main couple MUST end up together and they can’t possibly die. Lol, yeah so if we’re familiar with a specific author’s style, we can come to expect certain plots too. (I had that flabbergasted moment when this famous tragedy author actually had a book with a happy ending…But at least that was a pleasant surprise.) I loved how you organized this too, into the facets, conflicts, and expressions. It seems that I tend to think about facets most, so it was good to look at the other two as well. Ah for the being too “on the nose” issue, I’m sometimes a bit torn on this. There are some books that imply everything with no explanations, and some other books that always explain the POV character’s and sometimes even non-POV characters’ motivations. The Chinese martial arts stories tend to be rather on the nose when it comes to character motivations, lol. I think Jane Austen sort of is too. That said, I’m aware that not everyone likes to be told stuff, so I try to resist explaining everything, lol. It’s a balance between explaining enough so that the reader won’t accuse your character of being OOC, but not explaining too much that the reader thinks you’re just pointing out the obvious. Sometimes I like it even when the author…  — Read More »

Clearly and logically explained. Wow. John Gardner took two chapters to teach what you just did in one post.

I might just do my future “Best Writing Blogs” feature by simply pointing to this site alone. 😉

[…] know how to layer character elements […]

[…] know how to layer character elements […]

[…] to use word choice to layer character elements in subtext or fix issues with character likability, including for non-POV […]