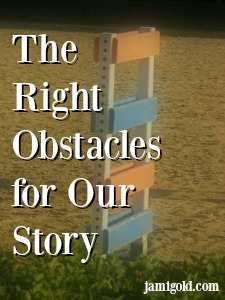 Many plot events in our story act as obstacles for our characters to overcome. The obstacles might be big or small—or anything in between.

Or maybe they seem small yet have big consequences later. For example, a character could get stuck at a railroad crossing and end up late for an interview, costing them the job.

Last week, we talked about how the plot is not our story. We can change plot events around and not necessarily change the main premise of our story.

The plot event holding up our character from their job interview could be a slow-moving train, sleeping through their alarm, running out of gas, etc. No matter what, they’re missing their interview, and that’s what matters for the story.

That’s why I cringe when I see authors grasp at different plot events in an attempt to fix their story. Sure, sometimes the original obstacle didn’t fit the story (an alien abduction made our character late for the interview!), but too often, the part of the story that’s broken isn’t the obstacle itself—but the storytelling around the obstacle.

Let’s take a closer look at the balance we have to find with plot obstacles to make sure they’re not too easy or too hard, but just right. *smile*

The Purpose of Plot Obstacles

Plot events serve many functions in our stories. As we discussed last week, the plot often reveals our characters or their struggle.

At the most basic, stories are about characters striving for a goal. Obstacles prevent our story from being:

They wanted X. They got X. The End.

That structure might work for flash fiction, but we need more for a full story. *smile*

The many purposes of obstacles include:

And those are just the purposes I can think of off the top of my head. I’m sure there are more we could come up with. *smile*

The Dangers of Too-Easy Plot Obstacles

In many cases, having too easy of obstacles is no better than having no obstacles in our story at all. In fact, it might even be worse.

If we build up a situation in a reader’s mind so they expect the obstacle to be big—setbacks, sacrifices, negative consequences, etc.—and the obstacle is overcome without any trouble, readers won’t just be bored. They’ll be disappointed.

In a way, readers are bloodthirsty. They want to see conflict and struggle and difficulties.

Readers want the cost of overcoming a problem to be expensive. The stakes in a story are the consequences of failure. Without failure or consequences, there are no stakes. Without a struggle or stakes, the victory of overcoming the obstacle is cheap and hollow.

When a character succeeds without struggle, it’s like they “won” a “participation” trophy just for showing up in the story. We don’t respect those trophies in real life, so readers don’t respect them with our characters either. *smile*

Tips for Fixing a Too-Easy Obstacle

When faced with a too-easy obstacle, we have a few options for how to make it more difficult or something the characters have to work for. We can…:

The Dangers of Too-Difficult Plot Obstacles

With all of those problems listed above, it might be easy to think that the solution is to throw the biggest, baddest obstacles we can at our characters. And to some extent, that might work.

However, there’s a different danger we run into when our characters always fail. In short, they can look incompetent.

Let’s take the common story of a detective attempting to track down a murderer. Yes, we don’t want them to actually catch the murderer until the end of the story, but we need to give them some successes along the way too.

Our detective will look incompetent if they never get anything right, if they’re always making mistakes that let the murderer escape, or if they’re overlooking an obvious clue. Ditto for stories with spies who are always nearly getting caught, etc.

(Or think of the stories with protagonists who—in an effort to make them relatable—seem to have no strengths whatsoever and are nearly defined by their incompetence (often until some magical power is revealed at the last minute, which may as well be called a deus ex machina).)

When it comes to setbacks, there’s a big difference between problems that are caused by our character making a mistake and simple bad luck. A mistake they learn from is fine, but if they continue to make mistakes, they look sloppy.

Readers won’t root for incompetent characters (unless that’s the point of the story, such as in a parody). Readers want to root for characters who deserve success.

Our characters can (and should) fail sometimes, so we only need to worry about too-difficult obstacles when most of them fall into this category.

If we receive feedback that our character is unlikable, seems incompetent, unworthy or undeserving of respect, we might want to ensure that the character…:

We want our characters to be challenged, forced to make sacrifices, and their success to be in doubt. Yet we also want to show them as competent (or at least not completely incompetent) and deserving of success.

This middle ground requires a balance of successes that help advance the plot (and also often come with negative consequences and/or additional obstacles) and failures that keep readers guessing and maintain tension in the story.

With the right balance, our characters will look heroic for overcoming the obstacles despite odds that seem impossible. They’ll look strong for not letting their weaknesses hold them back. And they’ll look worthy of success after paying a price of hard choices and sacrifices.

In short, we’ll have a story that reveals a character and/or their struggle. And that’s the point of our plot, no matter what obstacles we choose. *smile*

Have you read stories where everything felt too easy? Or felt too difficult to be believable? What made it feel that way? Can you think of other purposes for plot obstacles? Do you have any other suggestions for how to fix issues with too-easy or too-hard of obstacles?

Some days I feel like you are inside my head Jami! This ties into things we wrote in our new books and something I’m working on for the blog. Great stuff!

Great post which has given me a couple of ideas for a section of my story that I was drawing a blank on, but I’m curious – it seems like this would apply primarily to genre fiction, not necessarily literary fiction (I’m thinking of a classic or two where off the top of my head I can’t think of ANY obstacles. A character could make choices which don’t necessarily count as an obstacle, like choosing between two suitors.)Would you agree with that at all?

What I found I really needed to work on with my redraft was both adding complexity to my obstacles (e.g. causing setbacks) and making the obstacles escalate. There’s no point having the biggest obstacle first – it’ll just be all downhill from there.

Great points, saving this for future reference. Thanks, Jami!

Thank you for such a useful post. Definitely things to think about and work on here. I know where some of my stories go wrong now. Life is too easy for my characters. Life is just going to get a lot worse.

[…] the comments of my last post about plot obstacles and how to make sure our obstacles aren’t too easy or too ha…, Ashley […]

Greetings,
What you have written about readers expectations/relationship with a story, imagining what happens next, etc., is accurate. I have an expectation to believe in a character and story, that it could be real. So when an author takes a left turn, I do not read them anymore. I wrote a story about an Irishman in the 1880s American west. The accent didn’t seem real to my critique group despite the fact that A LOT of Irish traveled West. They just did not accept the “God bless all here” dialog from a cowboy. Lesson learned.
Stay Well…Donovan

Yes, my new story has some based-in-reality military aspects, but my editors and beta readers are questioning it, not believing the truth. *sigh* Sometimes the fiction is easier to accept than the truth. Thanks for letting me know I’m not alone with facing that issue. LOL!

Balancing Elements: How Can We Know the Right Amount? | Jami Gold, Paranormal Author

» Time and Balance A Book A Day

[…] ways to increase conflict and tension in my story. The ever-insightful Jami Gold had a post about plot obstacles, while Janice Hardy guest posted on Jody Hedlund’s site about why your plot has […]

[…] ensure conflict appears on every page […]

[…] ensure plot events feel logical and not contrived or too convenient […]