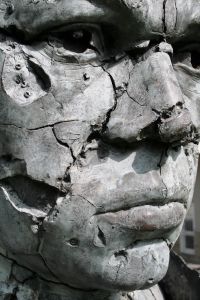 We’re almost through with the list of how to create strong characters.  So far, we’ve ensured they had goals and contrasted their self-image and persona.  Next up…

Do They Have Flaws?

To feel lifelike, our characters must have flaws like real people.  Without flaws, our characters risk making our whole story seem unbelievable.  Look at much of the fan-fiction out there, where writers too often embark on a wish-fulfillment project by inserting themselves into the story.  In fact, these perfect characters are so common there’s a name for them: Mary Sue.

So how do we make sure we’re not creating a Mary Sue?  By giving our characters flaws.  Real flaws.  “Flaws” like oh, my lips are too big and pillowy like Angelina Jolie’s do not count.

To be safe, just avoid thinking of any physical characteristics as flaws because it’s too easy for these to be overcome.  Tall/short, skinny/curvy, big-chested/small-chested, scarred/flawless—someone, somewhere likes those traits.  And simply trying to find a person who likes their physique isn’t enough conflict for our characters’ stories.

Notice what I said there?  About conflict?  A-ha.  That’s the key.  The best flaws create and enhance the story conflict.  Let’s look at some ways to implement flaws that add conflict.

Weaknesses are all opportunities to show character growth.  This doesn’t mean that characters’ flaws should be overcome and rendered null and void.  Characters still need to end the story imperfect or we’re back to a Mary Sue.  But this does give us a unique way of developing flaws for our characters.

Think of the final showdown in your story.  Think of what skills, attitude, or belief your character will need to have to survive that experience.  Now turn that around.  Can that necessary trait be one of their flaws when they start the story?

So listen to your characters to determine what they think their flaws are, but don’t stop there.  Keep going and give your characters more flaws: physical, emotional, and psychological.  And let’s see if we can make at least one of their flaws play into the larger story conflict.

What kind of flaws do you give your characters?  Is there such a thing as too many flaws?  Or can a flaw be too horrible for the reader to accept?

You’re right. A flaw is a flaw – not baggage or virtual impairment. It is a minor imperfection, not THE imperfection itself. I mean, you wouldn’t say a paraplegic hero’s flaw is that he can’t walk – his not walking is his state of being, but his wallowing in self pity over his state of being could be a flaw. So, when you ask, can a character have too many flaws? I’m thinking this would entail a writer muddying the lines between baggage (things, of which we are stuck with – until we accept them, because those things can’t be changed) and flaws – those things that trip us up occasionally, but can be understood and tempered once a character identifies them.

Thanks, Murphy! And *great* example about the difference between a state of being and a flaw. Awesome!

And my question of too many flaws goes back to my finding out just how many skeletons they have in their closet. LOL!

I sometimes pass airport time making notes about peoples’ appearances – but then one day it occurred to me that the only aspect about appearance that matters is that which the person has control over. Like, how does he CHOOSE to wear his hear, not, does he HAVE hair. The former indicates a decision, a motive. The latter just happens. This post reminded me of that. I also loved how you said, find out what your characters think their flaws are. How interesting! Thanks.

Yes, that’s a great observation about the things people can change and the things they can’t. Thanks for the insightful comment!

bumped into you on twit; glad I did. Twited, followed, subscribed, friended, added, liked, joined, walled… did I miss any? Looked, but couldn’t find, ‘cook for me’. You need to add> :):):)
-j

You’re my first all-in-one-shot “stalker”. 🙂 I think you got everything though. Good job!

Adding flaws to a character to avoid a Mary Sue/Gary Stu is a good idea, I agree, but if you add too many, then you’ll wind up with one of their younger siblings, Anti-Sue/Anti-Gary, who are just as annoying and horrible.
Also, I agree with what Murphy said about flaws. For example, because I’m Autistic, I’ve written a series of stories that feature an Autistic character, but that’s not his flaw. What is his flaw is the way he sometimes deals with things as a result. Like the time Walks-in-Shadows fights his mentor and winds up restrained under him because Vicente put his hand on Walks-in-Shadows’ shoulder and it never occurred to him to simply shrug it off and explain about his atypical sensory perceptions.

“What is his flaw is the way he sometimes deals with things as a result.”

That’s a great example of how flaws are about things we can change, not simply our circumstances or situation. Thanks for the comment!

[…] To feel realistic, characters need to have goals, a delusional self-image, multiple personalities, flaws, and a reason for their actions.  Hmm…  All that makes them sound a touch crazy, […]

[…] Give them flaws, no one’s perfect. But, no one’s totally bad, so give your antagonist some redeeming qualities – [source] […]