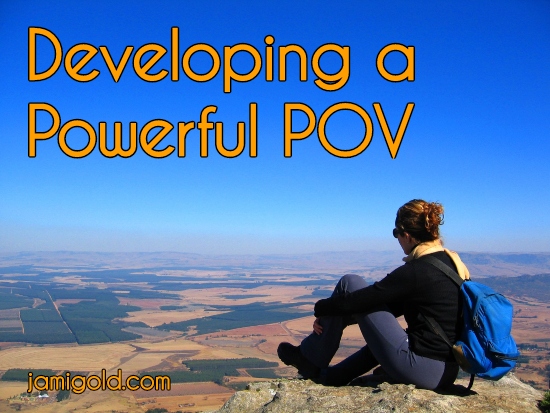 Over the years, I’ve written many posts about point of view (POV). Several of my guest posters have added even more.

But why is POV so important to understand? We might know that a character’s POV is about their voice or word choice, their thoughts or emotions. However, a strong POV is about more than those simple writing elements.

The better we understand the power of our character’s POV, the stronger and more compelling we can make our characters and our story. So let’s take a look… *smile*

Let’s start with a quick recap. Most of us are probably familiar with the different POV types, levels, whatever we want to call them:

The POV Character Runs the Show

Notice that with most of those POV options above, the emotions, thoughts, and perceptions shared with the reader are—for the most part—limited to what the POV character knows. In turn, the voice we use in writing the story is actually frequently the voice of our POV character rather than just our “author” voice.

(That said, any of those POV types could have multiple POV characters over the course of the story. If we want, we can change the “ownership” of the story from one POV character to another, typically at a scene and/or chapter break.)

What’s Revealed by Our Character’s POV?

For whatever character our story’s “camera” follows around during a scene, their perspective determines the point of view for the scene. So what does that mean? How does a character’s perspective affect our story?

Any two characters in the same scene would likely notice different things about their situation, so descriptions and settings are affected by our POV character for the scene.

For limited 3rd-person POV (and possibly 2nd), we could allude to what things the character doesn’t notice (at the cost of adding distance between the character and the reader). But for 1st and deep 3rd, the details themselves must be shared in the character’s voice, so they must first be noticed by the character.

What a character notices—or the subtext of what they don’t notice—helps readers get to know them. The biggest aspect of revealing our characters and creating the lens readers view our story through is with our POV character’s word choice and details noticed for settings, appearances of other characters, descriptions of events, etc.

For example, the word choice and details noticed could create this difference in how two characters view an ocean from the beach:

Would the POV character notice the chair’s fabric or know the name of that flower? Would they think about xyz at this point in time? If not, we can’t include the detail without adding distance between the reader and the character. And as we explored last month, our character’s POV can even affect how we format non-English words.

The deeper our POV, the more every detail shared is colored by how the character feels about it. Therefore, the lens a character uses to view a scene—and thus the lens used to share with readers—includes subtext.

What they notice or don’t notice isn’t just about where they happened to look or what they saw when they weren’t distracted. Rather, we tend to notice details that mean something to us.

Some details might reinforce our character’s feelings or assumptions. Others stand out in contrast to their expectations.

Compare the difference in how two characters might feel about an old couch:

A description of a couch is about far more than just letting readers know there’s a couch in the room. It tells readers about the character viewing the couch (or sharing any other description):

#3: What Makes Them Emotional?

At the same time, readers learn about a character by how detailed they are. If a character doesn’t care about something one way or another, they’re unlikely to use many words talking about it.

However, if something makes them upset or excited or whatever, they’re probably going to spend quite a few more words describing, complaining, thinking, and feeling about the situation. In that way, readers get to know not only what’s important to a character through the actual words used in the section above, but they also pick up on the character’s emotional level.

The amount of words our characters uses also informs readers about the character’s emotional level in a way that might reinforce or undermine what’s known or been stated about them. A character might state that something is important to them, but if that’s not supported by the actual word count, readers might not believe them.

In other words, the word count of various details is not only a subtextual insight into a character’s emotions, but it also acts like a hidden way to show how they feel or what they think (in addition to telling through the word choice itself).

For example, these descriptions start with similar word choices and make similar allusions, but the number of words leads us to guess that the second example character feels more intensely about the situation:

Our Story Is Shaped by Our POV Character

No matter how clichéd our character’s description might seem on the surface—single parent, Navy SEAL, bullied child, etc.—we can make them feel three-dimensional and unique by taking advantage of the power of digging into their perspective. In turn, as their POV is the lens that readers view our story through, their perspective leads readers to their own thoughts and feelings about what’s on the page.

How does our character's POV shape readers' impression of our story? Click To TweetOf course readers don’t have to agree with our character’s perspective—any anti-hero story points out just how much the two don’t need to be in alignment. But setting up that contrast is also a lens for readers and will affect how they feel about our story.

If we have multiple POV characters in our story, we can set up additional contrasts between how they each view situations and conflicts, and how the characters describe or feel toward each other gives readers more insight as well. An unreliable narrator is another way of playing with character POV and reader understanding.

Unless we stick with a shallow POV, our character’s perspective affects everything, from our readers’ understanding of the villain and conflict to our story’s tone, mood, and style. In fact, it might be hard to write a story that comes across to readers as dark and oppressive if our POV character is a ball of chipper sunshine all the time, but it also might be fun to try. *smile*

Have you thought about all the ways our story’s POV affects readers and their impression of our story? Have you considered the various questions above (about their worldview, priorities, etc.) to use POV to develop your character before? Had you thought about each of these three facets to POV before? Or was there a new idea about how to strengthen your story’s POV here? Do you have any POV insights to share?

I get slaughtered for 3rd pov shift errors in my drafts.

The writer creates multiple characters and multiple conversations yet each paragraph, chapter, or scene should contain one character’s pov.
Yet,
it is so easy to write a paragraph that has two voices or multiple personalities….after all, all of those personalities are inside of one writer’s head.

So here is the rule I need to memorize: Only one person is allowed to think per paragraph and per scene, but it’s okay to include the other character’s perspective at the end of that scene.
Yes?

Are there any popular novels or stories where pov often switches inside of the same scene because there are multiple characters and varying perspectives?

POV is a complicated subject, and even the solution/rule you mentioned would still qualify as headhopping. I’ll see about addressing your question in another post. Look for it next week! 🙂

I shared more information about POV and addressed your question about whether it’s okay to switch to another POV at the end of a scene in this post. Hope that helps! 🙂

Correct. 🙂 If you’re not writing in deep POV, you have more flexibility for zooming closer or further as feels right for your story and scene situation. Not every book or author is right for deep POV, and that’s part of what we might want to take into consideration when getting feedback.

For example, some editors might push for a deeper or shallower POV than what we intend or are comfortable writing, so we might want to make our intentions clear when searching for an editor so we don’t end up with an editor who’s wrong for our story or voice. I hope that helps, and thanks for the question!