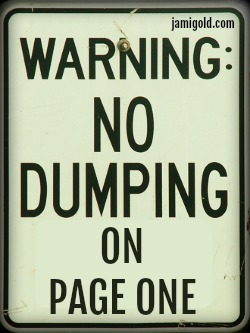 Today’s a holiday in the U.S., so I was trying to keep this post super-short. *cough* You can guess how well that worked. *smile*

While you’re here, don’t forget to comment on my Blogiversary post for a chance to win “me.” Want me to beta read for you or pick my brain about a writing or story problem? Now’s your chance! *grin*

We’ve often talked here about how tricky it is to get our opening pages just right. We have to grab readers’ attention (such as evoking curiosity), introduce our characters and the story world, hint at a problem, etc.

With all that information we want to get across to the reader, it’s easy to fall into the trap of stuffing our first pages with a dump of information in sentences that tell rather than show. At the same time, we also don’t want to confuse readers by not including enough information.

How can we avoid the problem of info dumping at the beginning of our story while still avoiding reader confusion that might lead to them closing the book? Let’s take a look…

What’s Our Frame of Reference?

As we write, we might think about devising fun dialogue, setting up our plot, or creating the right first impression of our characters. None of those are wrong.

However, if we write in deep point of view (POV), we want to regularly check in with the perspective of:

Would my character be thinking of this right now?

If it’s not appropriate for the character to think about, any story, character, or setting related details likely shouldn’t be included yet. (We can always include them later, when it’s more relevant to the character and story—which gets them off those important opening pages.)

What Do Readers Need to Know?

At the same time, we do have to include details that readers need. The problem is figuring out what readers really need to know—right now—to get into the story.

Based on the many unfinished stories I’ve seen over the years as an editor, beta reader, and contest judge, just as many stories suffer from unclear and confusing openings as from info dump openings. Trying to eliminate too much can leave readers without the context to immerse themselves in the story.

The One Trick to Find Balance

So what’s this “one trick” we can do to avoid info dumps but also include enough?

As I alluded to above…

Use Deep POV to Check Our Balance.

Thinking about our story, our characters, and their situation from their POV can help us find the right balance between dumping information and lacking context.

It’s all about using our character’s deep POV to check:

Use Deep POV to Prevent Over-Sharing

Deep POV focuses on their current situation and worries. Click To TweetIf we’re deep in our character’s thoughts, we’ll be less tempted to dump a bunch of information they already know. For example, Garrett, my gargoyle character in Stone-Cold Heart, wouldn’t spend his first page thinking about his backstory of how or why he was created in a worldbuilding info dump.

He knows his backstory, so he’d have no reason to think about it. He knows the worldbuilding defining his world, so he wouldn’t focus on it. Instead, in deep POV, characters would act on their current situation and think about their current worries.

Use Deep POV to Prevent Under-Sharing

Deep POV limits contextual information to phrases. Click To TweetMaintaining deep POV can also help us add context for the other side of balance. If additional information is needed for readers to understand the context of any currently relevant information—such as to hint at the reasons for those worries or the circumstances of the situation—we can weave in phrases.

Not sentences. Not paragraphs. Phrases.

In Stone-Cold Heart, my human heroine appears first, but I want to share an example from one of my paranormal characters to show how even worldbuilding doesn’t need to include info dumps. So the following example is from the start of the third chapter, the first page from my gargoyle’s POV.

Before this point, all the reader knows about him is that there’s a stone gargoyle outside the heroine’s apartment, and in the chapter before this, she sleepwalks out to the statue during a PTSD-triggered nightmare.

The details outside of his POV—the extra contextual information—are shown in bold:

Warmth crept through Garrett’s chest and spread into his limbs. Tingles followed, racing along his nerves, stirring sensations in his body.

For the first time in countless years, he awoke from stone-death. The human female curled between his limbs explained why. She must have focused enough trust toward him to help him regain full consciousness.

About blasted time. Although these circumstances weren’t the situation he wanted to encounter when he awoke.

Of all the things he’d seen during his stone-death, he hadn’t seen the one thing he’d expected. None of his regiment had brought a human female he could use to awaken—or had even come by to check on him.

All those years in his vulnerable form, where his prison of stone could have shattered—ending his life. Years without word, without reports from the field, without conversations with his regiment. Years left alone. Abandoned.

A wave of chills followed the effects of the woman’s warmth. No matter his inadequacies, loyalty should have taken precedence. The betrayal—if it was one—of his regiment was unforgivable.

Analysis of POV and Contextual Information

The opening above reveals:

In fewer than 200 words, readers meet the character and learn of his situation, with a hint of his story problem and internal character longing. (The setting was established in the first chapter with the heroine, and he already knows where he is, so he wouldn’t think about it.)

Yet readers also get a fair amount of worldbuilding by understanding that in this story world:

At the same time, the contextual information all centers on a specific purpose: allowing readers to understand the importance of the currently relevant information:

All that information adds to readers’ understanding of the current story: the stakes, his problem, the gap between what is and what should be, etc. Other information—such as how he ended up in stone-death, or why he’s in that location, or what happened to his regiment—can all wait. He’s not thinking of that now, so it doesn’t belong in his deep POV.

Remember that while we want to avoid the confusion that comes from a lack of context, story questions are a good thing. Curiosity can keep readers turning pages. So the right balance of information can hook readers and invest them in our story. *smile*

P.S. And don’t forget to enter my annual Blogiversary contest!

Have you read stories with information dumps in the first pages? Does that discourage you from continuing to read or make you less enthused about the story at the beginning? Do you struggle with avoiding info dumps in opening pages? Does this post help you understand how to find a balance? Do you have any other tips to share?

I really enjoyed this, and it couldn’t have come at a better time. Thanks for sharing!

This is the first time I’ve heard of using phrases to weave in backstory. I’m going to pay more attention in my reading to find those gems. I’m trying to remember if I glossed over this tool in any of the skill books I have.
Jami, you are Gold with a pen master’s touch.

And my last name is Filipino for gold. I guess I’m drawn to your wise words.

My opening page begins with the main character face to face with a major prohibition in her life, brooding over “if only,” and whose fault it is that things are this way. And then, carried away with thinking how things could have been, she breaks the rule and is in trouble by the end of page one.
Does that work, do you think?

It took me two read throughs to understand (I can be dense at times). But the part about using short phrases outside deep POV really was a big help. Your examples were excellent – thanks so much. I love your Stone Cold Heart too .

[…] difficult balance between “Huh?” and “TMI!” The technique discussed in her July 4 blog post has to do with point of view, which is brilliant because readers experience stories through the […]

This is such a brilliant approach, because even in narrative non-fiction readers experience the story through the characters. I’m glad to see you posting again. 🙂

I’ve written just about every version of how-NOT-to-start-your-novel-with-a-cliché, telling myself it’s just a crap first draft. But now that serious revision is at hand, I’m seeing I can’t really get any farther till I come up with some genuinely interesting first scenes for my characters. I can’t re-write ANY scenes without seeing what’s been said.

Thanks for the most concrete advice I’ve seen yet on what to do now that I’ve taught myself so thoroughly what not to do.

As a reader, I find that just that one unanswered question, that mystery, can tide me over through all kinds of info-dumps. I read a lot of sci-fi and being introduced to a particularly imaginative new world can hold my interest longer as well.

I completely agree that too many novels begin with infodumps at a time when they are irrelevant. If your heroine is about to defuse a bomb she should be concentrating on that, not on her high school crush who just reappeared in her life after ten years.
I see so many romances and cosy mysteries in which the first and even second chapters (if two main characters are sharing) simply stop us from getting on with the story.

Interesting point about using phrases instead of sentences or paragraphs! I’m not entirely sure I can limit my info to just phrases for my Camp Nanowrimo story, but I’ll see what happens when I come to edit it!

[…] narrative structure, Erica Cameron shares a detailed guide to worldbuilding, and Jami Gold has one simple trick to avoid the first page info dump of all that worldbuilding […]

[…] I mentioned about how to avoid information dumps by finding the right balance, there’s a constant struggle between oversharing (too much telling) and undersharing and […]

Showing vs. Telling: How Do We Choose? | Jami Gold, Paranormal Author

[…] Adjacent showing sentences benefit from the context of a telling phrase or sentence. The intensity of her anger took her by surprise, burning hotter than she’d ever experienced before. […]

[…] craft skills are necessary for our writing. On some level, good storytelling is about including the right context for readers to understand why the story situations and stakes […]

[…] how to use phrases to provide context and avoid information dumps […]

[…] Jami Gold has a great technique (and I’m sure she doesn’t use it exclusively) of adding backstory through phrases. Not paragraphs, not even whole sentences, but in phrases. Check out this excerpt from Jami Gold’s novel Stone-Cold Heart about the first time we meet the hero, a gargoyle named Garrett. (read Jami’s post on info dumps on page 1 here.) […]