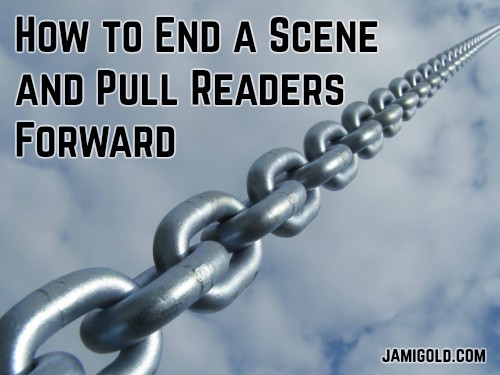 We’ve been talking about the different types of transitions we can create between scenes and plot events. At the end of every scene, readers might put down our book and decide against picking it up again, so it’s important to understand transitions and what we can do to keep readers interested.

We first discussed how how to avoid the types of transitions that make our writing feel more episodic. Then we dug into another type of transition found in stories with multiple points of view or subplots.

In that second post, I mentioned that one way to keep readers interested, especially with a “meanwhile” transition, is to use hooks at the end of scenes. Hooks can ensure readers desperately want to stick around to see what happens next, even if they have to wait a scene or two to find out.

A couple of years ago, Mary Buckham visited with a guest post about hooks, explaining the types of hooks that can appear anywhere in our story. She defines hooks as ideas within sentences that make readers sit up and take notice.

Today, we’re narrowing our focus onto the types of hook-sentences that will strengthen our scene endings (and thus our scenes).

Definition: What Is a Scene?

Before we dig in, let’s make sure we’re all using the same definitions for the purpose of this post.

We usually think of a scene as events that occur in a specific place and/or time (or a specific point of view (POV)).  When the story jumps ahead a day or switches to a different location or POV, boom, we have a new scene.

The differentiation he makes between them is not the same as how we usually think of scenes. In his book, he says:

Scenes are made up of:

Sequels are made up of:

In this post, we’re referring to the former definition of scenes, but understanding the idea of scenes and sequels will help us too.

Why Are Scenes Breaks So Important?

The blank line or chapter break at the end of a specific time/place/POV scene will often trigger readers to put down the book. (Silly humans, needing sleep. *smile*) So the last line before the break is important to give them encouragement to pick up the book again later.

The last line of a scene is often one of the most important sentences in a scene. The last line…:

Five ways strong final sentences for each scene help our story... Click To TweetIn case you’re not sure what I mean by the last two bullets, think of a scene as a mini-story. The end of the scene brings everything together just as a story’s resolution illuminates the point of the story.

As a pantser (writing by the seat of my pants), I’ve found that I sometimes don’t know what the point of a scene is until I write the ending. When the ending comes to me, suddenly everything else in the scene will make sense.

Each of those five traits of last lines acts as a hook and/or makes the rest of the scene stronger for being given a sense of purpose. Either way, our scene and story are stronger and more compelling to readers.

What Types of Last Lines Are Strongest?

What makes a scene ending strong? Click To TweetWhen I’m wearing my freelance editor hat, I frequently give my clients suggestions for their scenes’ last lines. I’m usually looking for something that adds meaning or resonance to the scene or story.

We often lead off stories and scenes with action for in media res. However, the same technique doesn’t necessarily work as well for scene endings unless…:

As straight action, the example in the second bullet point would be boring. If her action is symbolic of her turning a corner in her arc, the action would resonate with other aspects of the story.

Dialogue works similarly. Straight and normal dialogue would be boring for the end of a scene, but can be made to work if it adds something like:

By this point, we should all see the commonalities between what works for strong scene-ending sentences. For other types of sentences (non-action, non-dialogue, and non-internalization), it might be harder to see how to bring out the surprise or emotion, but the same concepts apply.

Whether we’re talking about setting and description sentences, non-verbal communication, visceral responses, etc., we want to…:

Let’s go through a few examples of the latter style, where narrative sentences add emotional resonance or meaning:

How Can We Fix a Boring Scene Ending?

While none of my examples above are pathetically “weak,” some are stronger than others, and that’s okay. Strengthening scene endings is often something we work on in edits.

How can we fix boring scene endings? Click To TweetSo what should we do if we’re faced with a less-than-strong final sentence to our scene?

On some level, my advice here is super obvious, but sometimes we need the obvious expressed in a different way to see things from another perspective. *smile*

If we have a weak final sentence, we can do one of two things:

In other words, if our scene is missing resonance or meaning, it might be because we have a Dwight Swain style of scene, but we’re missing the sequel that goes along with it. Sometimes, emphasizing a character’s reaction and decision to the scene’s events can add a sense of completeness to the scene.

What Can Strong Scenes Do for Our Story?

Strong final sentences can make each of our scenes feel like a mini-story, with goals, conflicts, stakes, and an arc of change. If most of our scenes contribute this level of strength, our whole story will feel stronger as a result. It will feel like more than the sum of its parts.

Most importantly, when each individual scene is strong, our readers will trust us to bring that strength to the overall story. When readers trust us, they’re more likely to sit back, follow our lead, and enjoy the story.

Do our readers trust us? Try building stronger scenes. Click To TweetWe’ve probably all read stories where we felt like we were in the hands of a master storyteller. Even when things felt off, we trusted that it would all make sense in the end. Oddities didn’t pull us out of the story or break our suspension of disbelief.

That’s what we want to create for our readers. We want our readers to trust that our story works. That our plot twists aren’t tricks. That there’s a point to our story.

Have you read stories with really strong scene endings before? What made them strong? Or what makes scene endings weak to you? Do you struggle with how to end scenes? Does this post help? Can you think of other styles of sentences that make for strong endings?

Thanks for this! Always a good reminder.

Before, I’ve always just thought of scene-end hooks as something to keep the reader reading. But I liked what you said about having consistently meaningful scene endings (e.g. new emotional epiphany, new emotion/ decision/ increasing stakes) to make the readers have faith that your story is a worthwhile, maybe even profound one.

Shocking last sentences tend to work on me, e.g. a friend who suddenly turns to stab the MC. It’s very cliched, but they do work, lol.

Last sentences that reveal important emotional information, especially if they are unexpected, are great too. (E.g. “If only he knew how much his declaration broke my heart.”) Random example, but you get the idea, haha.

Top Picks Thursday! For Writers and Readers 12-21-2017 | The Author Chronicles

[…] Janice Hardy shares 4 tips on writing action scenes and explains when to add a scene break, while Jami Gold discusses how to create scene endings that hook readers. […]

Thanks. Depending on what genre, I might end with a witty or apt comment by a character.
We’re advised to enter a scene late and leave early. In other words when you’ve made your point, move.

Exactly! We shouldn’t let a scene just kind of fade out. That loses energy and pacing momentum–not good. Thanks for the comment! 🙂

[…] When we get down to writing, we have to juggle a lot of structural items. Diana Hurwitz discusses where to begin, Peter Selgin warns against the deadliest first page sin, Laura Davis has 4 ways to develop a unique writing voice , and Jami Gold tells us how to create scene endings that hook readers. […]

[…] not damaging the reader’s connection to the story by leaving readers unanchored or without a hook to continue reading, […]

[…] probably all heard the advice to end our scenes and chapters on a hook. At the end of every scene or chapter, readers might put down our book and decide against picking […]

[…] I like the Fictionary description of entry and exit hooks all right, but I think Jami Gold has an even better description about them in her blog post here.  […]

#nanoprep What If? What Next? | Hopes & Dreams: My Writing and My Sons

[…] This is one word for the end of scene hook, the twist that raises the stakes and heightens tension and suspense. This is what will keep your […]