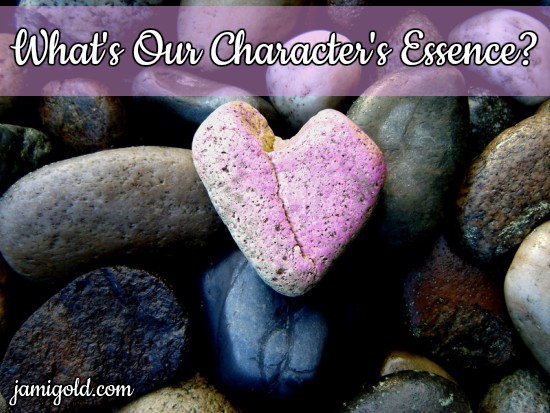 Last time, we talked about how to make sure our characters are unique and distinct by layering different aspects, from personality and worldview to how they interact with others and use coping skills. Even just layering several tropes can result in a unique combination for our character.

However, as I mentioned in the post, it’s possible to tweak layers of a character—and end up with something distinct—without actually changing the character’s essence. For my example, I pointed to the seven different Spidey characters in the recent movie release Spider-Man: Into the Spider-Verse.

Each of those Spidey characters is distinct, not just a clone of the Peter Parker version we all know from past movies. Yet, at their essence, they’re also the same.

Not surprisingly, that prompted a question in the comments. *grin*

What is a “character essence” precisely?

To start our journey into understanding character essence, let’s revisit the Spider-Verse movie. As I mentioned last time:

In Spider-Verse, the bad guy creates rifts between parallel universes, and various spider-characters from different multiverse versions of the world end up stuck in the version with main character Miles Morales.

The movie goes out of its way to point out how the Spidey characters are all based on the same character essence. They all repeat similar origin stories (“I was bitten by a radioactive…”), have similar backstory wounds (death of Uncle Ben/Uncle Benjamin/etc.), and so on.

However, at the same time…

They each come from a different “world,” a different universe (or even genre), that shaped them and their attitude. They made different choices, had different reactions, had slightly different priorities or enthusiasm, etc.

In the list I shared last time, those circumstances, choices, actions/reactions, etc. are all layers in creating unique characters. So how are these Spider-Verse characters still all Spidey?

As Somebodylost mentioned in the comments:

The multiverse plot point is always a good exercise for layering, and that’s why it’s so fascinating. Different circumstances that shaped different decisions, which makes different scenarios, all made by the ‘same’ person.

In other words, would the character be Spidey without that bite or the powers that came with it? Not really. So we learn that in some cases, the high-concept hook or premise of a character can contribute to their essence.

But many characters don’t have a hook or premise and might just be constructed up from a collection of tropes or other not-so-high-concept sources. So let’s keep digging…

Another way the Spider-Man character helps us learn more about character essence is because—just in recent years—he’s had so many movie reboots: the Tobey Maguire trilogy, Andrew Garfield’s “Amazing” movies, and Tom Holland’s turn in the Marvel Cinematic Universe with Spider-Man: Homecoming and the Avengers.

What is the essence of a character? 3 ways to define it... Click To TweetEach reboot is a little different as far as backstory details, style/tone/mood, emotional arcs and internal struggles, etc. However, all those reboots also give another perspective in how a character can be the same but different.

The reboot versions of these characters have far different circumstances, with Spock’s whole planet being wiped out and Kirk experiencing far more failures and betrayals. Those differences are reflected in different choices, attitudes, etc. Yet the characters are still recognizable as Kirk and Spock.

I’m sure some fans don’t consider the reboot Star Trek characters to be “real” or the Kirk and Spock they love, but I say we can still look at what makes these characters “feel” the same. Much like fan fiction, reboot characters are meant to evoke the original in some way, connecting the dots or creating subtext to link the new versions to the characters’ essences.

In the reboot, Kirk is still brash, impulsive, a strong leader, etc. Spock is still a proponent of logic, more thoughtful, internally conflicted, etc. The characters still develop a close friendship and are both deeply loyal.

Along those lines, if we asked several people to describe a character, we’d likely see some of the same terms and phrases come up again and again—a defining set of traits. That said, especially in the case of a reboot or fanfic, a character doesn’t have to embody all the traits commonly mentioned to still share the same essence—just think of a gender-flipped character.

But that perspective makes it clear that, even without a high-concept hook or premise, our characters might have a defining set of traits that contribute to their essence.

Character Essence Insight #2:
What are a character’s defining traits?

Focusing on that “defining set of traits” of our characters can also help us in other ways. For example, if readers don’t repeat similar descriptions for our characters, that might indicate our character isn’t well-enough developed. They might be lacking elements or layers that make them distinct and unique.

We’ve talked about our character’s essence here before in a different context. Michael Hauge’s storytelling advice focuses on our character’s internal journey—from living in fear in their identity to living courageously in their essence.

3 lessons about our character's essence — from Michael Hauge, Star Trek, and #SpiderVerse Click To TweetIn Michael Hauge’s teachings, a character’s essence is who they have the potential to become. Who would our character be if they had the courage to be their true self? We could look at their actions, beliefs, choices, sacrifices, how they deal with conflict, etc.

However, as we’ve seen, different circumstances and backgrounds can lead to our characters making different choices and surviving different scenarios. The original Spock’s attitude to all things Vulcan is different from the reboot version, who lost everything with the planet’s destruction. Yet, if their circumstances were the same, they’d have similar attitudes because of their similar essence.

So we might look at their potential from the perspective of both the best and worst of all possible worlds:

What Essence Is Revealed by Their Potential?

Going back to the Spider-Verse characters, despite their differences, all the Spideys are good characters who want to save the world. Through the worst-of-all-possible-worlds lens, one of the movie’s jokes is that they’re all willing to sacrifice. Their big-picture priorities, choices, and beliefs are echoes of the same essence.

At the same time, emphasizing that “potential” in the best-of-all-possible-worlds idea, one of the more disillusioned Spidey characters sees how much better his life could be, given different circumstances, and wants to change himself to match when he gets home to his universe. Or to put that another way, once he knows his potential, he changes his priorities to match his essence, no longer letting his specific circumstances hold him back or discourage him from trying.

In other words, the details of characters might be warped by the specifics of the story world they inhabit, but their “heart”—their principles and convictions and core aspects of their humanity—remain the same. The potential of their character contributes to their essence.

Character Essence Insight #3:
What’s a character’s potential under the best and worst circumstances?

While we can’t necessarily come up with an all-encompassing single way to define character essence, hopefully these three perspectives—hook/premise, defining traits, and potential—have given us a few ideas. And with a better handle on our characters, we might feel more connected to them, which might help our readers connect to them too. *smile*

I think you are brilliant and thank you for all the wonderful information. I just finished writing my first book and am now on the quest to get it professionally edited. Eek!

Hey Jami, I loved this post! Once again, sorry for commenting so late. Been so busy lately. Yeah, those are good ways to dig into what a character’s essence might be, via defining traits, potential, or hook/ premise. Do you think identities should be a part of their essence too? (E.g. Gender, sexual orientation, age, race, ability status, religion, social class, etc.?) I know there are gender bending fanfic as well as book characters recasted in movies as a different race (such as Annie being recasted as a black girl in the most recent movie of “Annie”). But is there a point when such identity-bending distorts the character so much that you don’t think they are the same people anymore? For instance, there’s this villain in a book who is originally a middle-aged gay man. But in a TV show based on this book, this villain is recasted as a young, straight girl. They still have the same name (it’s a gender neutral name), with the same social position and power. But for me, changing a character’s age, gender, and sexual orientation was just too much, that I think they are simply different people altogether, despite their similar social positions and shared name. Related to this, could a character’s relationships be so different that you would view them as distinct people? In another example, the two main guys were twin brothers in this book. But in one of the movie adaptations of the book, one of these brothers is recasted…  — Read More »