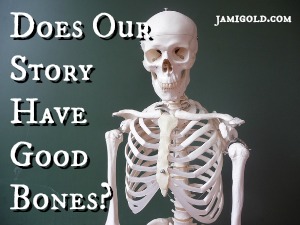 Whether we’ve recently finished NaNoWriMo, or we have a completed story that we’re not sure works, we might struggle with deciding what to do next. Especially if we worry our story is a hot mess, we might be tempted to just shove it under the metaphorical bed and forget about it.

If we don’t mind that we spent time writing a story condemned to the dust bunnies, “trunking” a story is a valid choice. Just the process of writing and working through a story can teach us a lot, so the time isn’t necessarily wasted. A forgotten story is only a “failure” if we fail to learn anything from the experience.

But for many of us, we don’t want that time to be wasted (by any definition), and we’d rather do something with the story—if we can. If we decide our story has enough promise that it would be worth the time and effort to make it work, what should we do next?

Let’s take a closer look at the essential elements for a story, so we can judge our writing and get an idea for how much work it might take to turn those story bones into something good.

Essential Elements of a Story

(Note: These tips will probably apply best to positive-arc stories. In the standard positive-arc story structure, the purpose of the plot is to reveal the character arc—how do plot events force the protagonist to change? With a flat arc (where they don’t change) or a negative arc (where they don’t get a happy ending), some of the character-focused elements might need to be tweaked or deemed irrelevant.)

Readers want an interesting story that feels like a worthwhile use of their time.

Readers want a sense of the point of the story, which is met by a major turning point near the 25% mark, also known as the End of the Beginning or the First Plot Point beat in story structure.

Readers want twists and turns in a story, which requires at least one time in a story when the context changes. This requirement is met by a major turning point near the 50% mark, also known as the Midpoint beat in story structure.

Readers want the ending to feel in jeopardy, which is met by a major turning point near the 75% mark, also known as the Crisis beat in story structure.

Readers want to reach a resolution with the antagonist(s) and story goals, which is met by a major turning point that often takes up from the 80% mark to the 95% mark, also known as the Climax or Finale in story structure.

Readers want a story that makes them forget they’re reading. Just as a great writing voice can forgive many sins, so too can a great story flow and pace that pulls readers along.

Update: Want this in a worksheet format you can download and fill out? Your wish is my command. *grin*

If we have all these elements, we likely have a story—and not just any story, but a story that’s already strong, has a purpose and arc, and can be made even stronger by bringing out the aspects that will create resonance within readers.

We can reference the theme in echoes throughout the story. We can emphasize the protagonist’s inner struggle and changes. And we can sharpen the turning points to deepen the disasters and dilemmas the characters face. Etc., etc.

These questions are all about ensuring the bones of our story are good. With good bones, we can then flesh out a great story by strengthening the plot and character arc muscles and adding the flawless skin of compelling prose. *smile*

Have you ever wondered if a completed story had good bones? How have you tried to tell? Do you agree with these essential elements? Can you think of any others that should be included? Do you think these elements would help indicate whether a story has good “bones”?

Oh as my story I just finished is an epic, it’s actually made up of many stories, many arcs. The protagonists don’t change much, but certain other main characters do. The main villain is the one who changes the most dramatically. Some of my characters actually have negative arcs, and there is a childhood best friendship that was destroyed beyond repair. (No idea why something so sad happened in my story.) As for themes, yeah, my story has tons of themes in it, yay! The one most notable is the theme of forgiveness. The story seems to imply that you can forgive anybody, no matter how heinous the crime, as long as they are truly and deeply repentant. I actually disagree with this viewpoint, lol, but it does agree with my religion (Christianity)’s stance. And you could say the “main story” involves my main villain and how he becomes good and is forgiven (though not all forgave him, of course.) So you may say that my villain is more interesting than my protagonists, lol. I really like some of the side stories, though, like the “unrequited love but marry anyway” couple I told you about–quite a unique situation that I have never heard of before. I’m glad it worked out for them in the end, or else they would be getting a sad ending as well, which was what I initially anticipated. 🙁 I still didn’t predict that that aforementioned friendship would be destroyed, though, sigh. P.S. It was great…  — Read More »

With all the talk about Star Wars, I’ve been thinking a bit about Darth Vader’s character. I think a lot of people found him easier to forgive before the prequels–when we saw more of just how bad he was. Before, I think most fans were perfectly willing to find him redeemed just because of the one act of ditching the Emperor.

So villain characters can definitely be interesting! 😀 Thanks for the comment!

I have a checklist for when I edit and make sure my story has all the elements it should have, but I like yours better. Thanks for the interesting and educational post.

I’ll have a downloadable version of this checklist in a future post. Stay tuned. 🙂

Merry Christmas! A Gift for You… | Jami Gold, Paranormal Author

[…] I’ll be mostly offline for the rest of this week, but I wanted to leave you with a gift before I disappear. I’m a huge fan of Christmas, but I interrupted my Christmas to-do list to put together a worksheet based on the Essential Elements list I covered in my last post. […]

[…] Does Our Story Have Everything It Needs? by Jami Gold. Great points on her list! […]

[…] Does Our Story Have Everything it Needs? by Jami Gold […]

[…] a Story: Does our story contain all the essential elements? Does it have the bones of a good story? Learn what elements we need for our story to be strong, have a purpose and an arc, and how we can make it even […]

[…] Use my worksheet for analyzing our story’s bones. […]

[…] our story contain all the essential elements? Does it have the bones of a good story? Learn what elements we need for our story to be strong, have a purpose and an arc, and how we can make it even […]