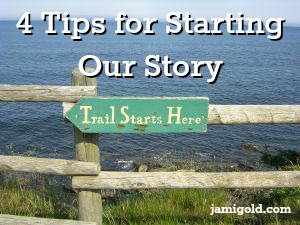 Tomorrow, thousands of writers will start their novel for National Novel Writing Month (NaNoWriMo). I’m not in a good spot in my writing project schedule to participate this year (*pout*), but I’m cheering from the sidelines. (I’m Jami Gold if anyone wants to buddy me.)

Tip #1: What Impression Do You Want Readers to Have?

We can start our story thousands of ways. To narrow down our choices, we need to figure out what we want to accomplish: What impression do we want the reader to have from our beginning?

Stories are about change, so if we know something about how our story ends (based on our story’s premise or climax), we know what kind of contrast to set up at the beginning. We can think about that ending and brainstorm ideas about what sort of beginning would show the change we want for our theme.

That might mean we figure out how to lead into the story’s main conflict. Or how to show the character in the situation that would kick off the right emotional arc and theme.

(See more about the steps we can go through to find our story beginning: Happy New Year! Let’s Talk (Story) Beginnings.)

Tip #2: What Opening Scene Leads to the Rest of the Story?

Now we need to tie that big-picture concept into the rest of the story. This need for a connection between the opening scene and the story itself is a major reason why many prologues don’t work.

Whether it’s part of a prologue or not, an opening scene should:

That means we have to decide how we’re going to get from Point A (the opening image) to Point B (the Inciting Incident that kicks off the story). Often this means trying to move Point A as close to Point B as possible, starting just before something happens to the protagonist that forces a change or decision.

(See more about prologues: A Prologue Will Help Our Story When…)

Tip #3: What Will Interest the Reader on the First Page?

Instead of looking at story openings as writers, we need to look at them from a reader’s perspective. We have to make them curious about our characters, their situation, their problems, and their world with those first words.

Sometimes we can do that with voice alone, just as some people in real life have amazing charisma. But even if we’re that talented, ensuring we have interesting characters and situations will never hurt.

Creating interesting characters doesn’t mean readers want a physical description or a dry backstory of the character’s tale of woe. Readers want to see characters in action, showing who they are, their strengths and weaknesses, and what matters to them.

Creating interesting situations doesn’t mean we have to show action-filled conflict. In fact, the conflict on a first page doesn’t even have to involve a character. The conflict can be within the reader, between what they expect and the words on the page. Hints of impending issues or a gap between the expected and the reality tell readers there’s something to look forward to, that there’s a story there.

That’s curiosity. Readers will keep reading to find out what will happen next and to learn the answers to their questions. Human nature wants to fill that knowledge gap—and keep reading.

Tip #4: What Doesn’t Belong in Our Thinking Process?

All that said, we’ll rarely come up with the perfect beginning—much less a perfect first page—while drafting. Even if we know everything about the story arc and opening scene, we might emphasize the wrong elements.

Rather than obsessing over that, we just need to get the draft close and then fix it in revisions. By the time we finish drafting the story, we’ll know the right tone and thematic messages to emphasize. Then we can use feedback about character likability and reader interest to tweak the details.

During drafting, our definition of a “good” beginning should simply be for the story to head in the right direction. If we start with an older sister going through a divorce in a black comedy, and we later discover the story is really about the younger sister heading to college in a tragedy, we’ll have to scrap most everything we write.

Whereas, if our story starts off in the right direction, we can almost always fix it in revisions. (*psst* If you need assistance with those fixes, that’s where a “book doctor” can help.) So have enough of a plan to get a good start, but don’t stress about perfection. *smile*

How much do you think about and plan your story beginnings before drafting? Which element do you struggle with the most? How much do you worry about first lines and first pages? If you’re doing NaNo this year, are you ready?

I’m terrible, but up until this year’s NaNoWriMo I really didn’t do much planning for my book beginnings. That wasn’t a big deal with the first novel because I still like where it begins even after all this time, but the second novel I wrote for NaNo picked up with the cliffhanger ending of the previous book, and that took a *lot* of revising when I got rid of the cliffhanger. I’m not sure about my beginning for the book that I’m starting tomorrow, but I think it’ll be enough to get me back into the world of this particular story. I can fix it up in revisions if need be. Good luck to everyone who’s doing NaNoWriMo!

Well, I’m a pantser, so I’ve written stories from nothing. LOL!

But usually that only works for me for short stories or novellas. When it’s a full-length novel, I like knowing the end will be worth it and not a waste of time. Hence, the very vague planning of the basic arcs.

I like knowing enough to have a direction so I don’t end up with a “you can’t get there from here” problem, but we all have to do what works for us. 🙂 Good luck in Nano and thanks for the comment!

[…] Gold: NaNo Prep: 4 Tips for Starting Our Story. “On this occasion, I wanted to bring together several tips from my previous posts about […]

Ha, I’m quite worried about my opening, because it really lacks conflict. Yes we are told right from the start what the hero and heroine’s mission is (it’s action/ adventure), but the reader is not sure why he or she should care. And conflict doesn’t start until…sometime later. This surprises me though, because my stories tend to be tense with conflict, mystery, and suspense most of the time. I’ve never had such a conflict-less beginning either. But I’m counting on my future revision to help me fix this.

As for reader interest, I personally am very interested because from what I found out about the characters, I’m already interested in them. And I’m also curious about how the heroine and hero’s relationship will develop, and I enjoy watching their interactions. However, I’ve learned that just because I’m interested in my characters, doesn’t mean other people will be, especially as they aren’t as connected to my characters as I am as the author, lol. Btw, the hero and heroine will never fall in love with each other. They’re only master and bodyguard, and good friends. They act like siblings with a good relationship too.

Interesting! I definitely think that type of beginning would be fixable in revisions. If the mission is important to the characters, we can make it important to the reader. Generally that could mean making the motivations and/or stakes (consequences of failure) clearer.

I hope it all works out for you–beginning, interesting characters, and all. 🙂 Thanks for the comment!

Yes, I think there NO stakes if he and she fail the mission at all! Well actually, there ARE stakes. If they don’t deliver this message, a lot of people are going to die. However, I didn’t make this stake explicit. Problem is, it’s in the hero’s POV and he doesn’t know that the failure to deliver the message will mean death to countless people! He just thinks this is an errand his mom would like him to run for her. XD. So I’ll have to find a way to see why he would care, beyond displeasing his mom if he doesn’t deliver it, lol,

Oh yes, and you can do a lot with subtext too. Maybe he doesn’t care as much and grumbles a bit about the errand, but if she knows, her response could hint that there’s more going on than meets the eye. 🙂

In other words, there are several approaches you could take, depending on the specifics. Have fun with it! 🙂 Thanks for the comment!

” Maybe he doesn’t care as much and grumbles a bit about the errand, but if she knows, her response could hint that there’s more going on than meets the eye. :)”

Yes, there are ways to give hints even when we’re not in the “in the know” POV. 🙂 I hope that helps. Thanks for the comment!

[…] talked before about how we can figure out where to start our story, and as I mentioned […]

[…] get across the right impression, lead to the rest of the story, and grab readers’ interest? Learn what story opening might work best and an alternate approach for figuring out the best story […]

Does Our Story Have Everything It Needs? | Jami Gold, Paranormal Author

[…] Is the story starting in the right place? Why is the story happening now? […]

[…] get across the right impression, lead to the rest of the story, and grab readers’ interest? Learn what story opening might work best, how to avoid an opening page infodump, and an alternate approach for figuring out the best story […]

[…] decide on the right place/scene/event for story beginning […]