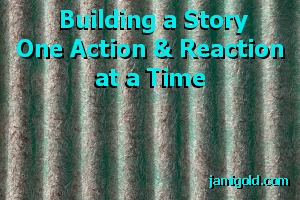 This might be a deep philosophical post. Or it might be random thoughts triggered by my remaining sugar coma (7 Thanksgiving desserts!). You’ll have to let me know.

I’d been thinking about doing another post about actions and reactions in writing, but the more I thought about it, the bigger the subject became. My fascination with the topic of actions and reactions started when I first heard about Dwight Swain’s concept of the Motivation Reaction Unit (MRU).

A Story Is a Chain of Actions and Reactions

A story’s narrative is made up of a chain of actions (stimulus / motivation / cause) and reactions (response / effect). We find this same chain at the large scale of a story’s acts and beats and at the small scale of sentences and paragraphs.

The Scale of Actions and Reactions

If we list the action and reaction scale from smallest to largest, we have:

MRUs are useful for analyzing the sentence level of a story. We can make sure that we’re not skipping a step in the narrative chain and that the stimulus precedes the reaction (not: “She yelped after the dog bit her.”). Also if we want to call attention to a reaction, we can add more to the response (visceral reaction, thought, action, speech).

Dwight Swain also introduced the idea of Scenes and Sequels, which I discussed in an earlier post.

These are scenes in the traditional sense, defined by a line break at a change in time or place (or point of view).

These are the beats of a story’s structure, as found in Blake Snyder’s Save the Cat or Larry Brooks’s Story Engineering.

(We can actually continue up the scale with Story Acts (the traditional three-act story structure) and Series Arcs (where one book is the cause of the sequel book, etc.), but we have to stop somewhere. *smile*)

Transistions: The Bane of Many Writers

Actions and reactions are the building blocks of storytelling at all those levels, and that means those levels all have something else in common: transitions. Many writers struggle with transitions.

Sequels themselves are often transitions where the character is trying to decide what action to take. Time/place scenes usually need at least a “three days later”-type of anchor at the beginning of the scene. And story beats create one big chain of “characters react to story beat and then a transition to start setting up the next story beat.”

(Or if we go bigger, the “sagging middle” act is the transition between Act One and Act Three. And the second book of a trilogy is essentially a transition from the first to the third book—which points out how amazing The Empire Strikes Back is for being such a well made transition movie. *smile*)

For my NaNoWriMo (National Novel Writing Month) project, I had a vague idea about what some of the story beats would be. That ambiguous plan was my compromise to the high word count required for NaNo while still respecting my muse, who wants me to write by the seat of my pants (mostly because he believes in “need to know” drafting and he thinks I don’t need to know anything in advance).

So with only a hazy idea of what would happen every 10,000 words or so, I had a lot of writing to do in between those beats. And most of those words were essentially transitions between the characters’ reactions toward one story beat and the setup of the next beat.

That style of writing taught me something about transitions that goes back to psychology and philosophy. Yes, really.

“Be the change that you wish to see in the world.”
— Mahatma Gandhi

Like the Gandhi quote, marriage therapists tell couples all the time: “Don’t try to change the other person. Change yourself first.”

Why do they say that? Because how someone acts is always a reaction to something else. So one way to change how someone else acts is to change yourself. By changing the action, the reaction of the other person might change as well.

Along the same lines, whenever I struggled with the beginning of a scene over this past month, I invariably discovered that I needed to change the end of the previous scene. Maybe I didn’t leave the characters with a goal or problem to overcome. Maybe I’d answered one story question and hadn’t replaced it with another. Maybe I didn’t leave a hook to continue the narrative chain.

By tweaking the action of the previous scene, I was able to find a better reaction that carried the story forward. And with a little momentum, transitions weren’t so tricky after all.

Do you struggle with transitions? Have you thought about these different scales of action/reaction units before? Is there one level you have more trouble with? Do you have any tips for how to keep the narrative moving forward and flowing smoothly throughout transitions?

You wrote that you already had a lot of thoughts about actions/reactions, so you probably already thought of this. But I couldn’t help being reminded of your post on characterization some months ago, and how changing even one character trait would change the way the character reacts, and the actions that character would choose to take. So it all really kind of does come back to actions and reactions! Tweak one thing–about a character, a setting, an action–and all that foll0ws will naturally have to change, too.

As always, thanks for the interesting and insightful post.

Exactly! And that’s why revisions often create a domino effect. When we tweak one aspect of the characterization, we have to go and adjust a bunch of other things. Fun, fun. 🙂 Thanks for the comment!

Great post, Jami;
This is stuff that seems like it should be somewhat intuitive, but when it gets to those sticky places where things don’t seem to be working, I see how this will be quite helpful!

Exactly. We all know this stuff on some level. 🙂

But as someone mentioned on Twitter, sometimes we’ve never consciously recognized it before, so it’s good to see it expressed in a way that we can add it to our toolbox. 🙂 Thanks for the comment!

[…] Actions And Reactions: The End-All-Be-All of Story Telling by Jami Gold. Rate this:Share this:Like this:LikeBe the first to like this. […]

[…] Actions and Reactions: The End All Be All of Storytelling by Jami Gold […]

[…] Once you’re actually drafting, Jami Gold tackles transitions within a story by reminding us that every action should be a reaction to the prior action. And if you’re writing for an international audience, Oliver Randall demystifies the most common […]

Hey, just a thought about this, maybe a story can be seen like a Rube Goldberg machine? You know, those contraptions where various mechanisms each trigger the next one in a chain reaction.

Ooo, I love Rube Goldberg machines. 🙂 And yes, that’s a great way to look at stories! Everything has to fit together just so for the momentum to continue through to the end, and if the pieces are off just a smidgen, everything stalls.Thanks for the great comment!

Great post, Jami! I tell ya, when I think about all this too much, my mind goes haywire. But I need to think about it to make sure I do it right!

I hear you. I try not to think about things too much while I’m drafting or I’d probably freeze up with writer’s block. 🙂

I hope that a lot of this knowledge seeps into my manuscript by osmosis and that the rest I’ll catch in revision. Mostly, I try to be very sensitive to when a scene isn’t working as well as it should, and then I pull out tools like this to fix it. 🙂 Thanks for the comment!

5 Tips for Getting Unstuck in Our Story | Jami Gold, Paranormal Author

[…] Stories are made up of actions and reactions. Everything is a reaction to what came before. So if we’re having trouble moving forward, maybe it’s because the actions leading up to the stuck section are off. […]

What Do Your Characters Falsely Believe? | Jami Gold, Paranormal Author

[…] we need to follow the action-reaction chain of our story. A plot event can cause a character to react in a way that exposes their false belief […]

[…] create those consequences, we must pay attention to cause and effect. If plot event A would logically lead to plot event B, then B should happen. We can’t skip […]

[…] But do you see all those “and then”s in that progression? That means the event of the hero making the heroine laugh is not directly affecting the following scenes. It’s simply part of the cause-and-effect chain of the story. […]

How to Strengthen Emotions in Our Writing | Jami Gold, Paranormal Author

[…] As I mentioned in my last post, understanding Dwight Swain’s Motivation Reaction Units (MRUs) can help us write emotional responses. Just like real people, our characters experience emotions when something triggers those emotions. This is the action/reaction chain: […]

[…] Stories are made up of actions and reactions. At the sentence and paragraph level, we call these Motivation-Reaction Units (Dwight Swain’s MRUs). Many times, when our writing feels flat, it’s because we’re missing a proper emotional response to a motivation. […]

[…] to plot possibility can, in fact, distract us from seeing the real issues. In the big picture, plot events are important mostly for acting as triggers to force our characters to make choices, reveal emotions, cause reactions, […]

[…] that happens in our story should have a trigger. Every effect should have a cause. So something needs to happen that forces our characters to […]

[…] are the smallest scale of actions and reactions, but we see the same importance of keeping our writing in the correct order on the bigger scale of scenes and st…. We can’t have a character react to a plot event that hasn’t happened […]

[…] common approach to storytelling is a cause-and-effect chain. A causes B, which causes C, […]

[…] action-reaction chains are a new concept to you, Jami has written about actions and reactions and cause and effect before. These posts are a great place to […]

[…] identifying necessary scenes to fill in the blanks between each beat sheet scene. Our story should be a chain of cause-and-effect, so our scenes are basically a way to cause the next […]

Does Our Story Have Everything It Needs? | Jami Gold, Paranormal Author

[…] sure that events, turning points, character choices, scenes, paragraphs, and sentences all follow a cause-and-effect chain. The plot should flow by A causing B, which then causes C, […]

Ask Jami: Can This Story Be Saved? – Paranormal Author

[…] Missing consequences from previous scenes (broken cause and effect) […]

Showing vs. Telling: How Do We Choose? | Jami Gold, Paranormal Author

[…] I’ve said before, stories consist of scenes that connect in a long, cause-and-effect chain. In general, we’d want to show the connections between our story’s turning points. If […]

It never fails, Jami. I read the post in the email newsletter and it links to other posts that I need to read (or read again), like this one, and they link to other posts, and so on and so on. Before I know it, I’ve spent a quality hour with the virtual you. Such a lovely way to spend an hour. Thank you.