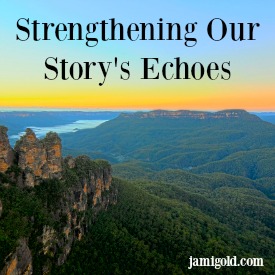 We’ve talked before about how story is different from plot. As I mentioned in that post, a story’s plot—the obstacles encountered—is just a tool to reveal a character or a struggle.

The real key to a story is seeing a character change (or potentially, choose not to change, like in some literary fiction) or seeing their struggle to overcome the obstacles (whether they succeed or not).

But sometimes we can have lots of plot ideas, and we might not be sure if—or how—we can pull those together into something that feels like a story. Let’s take a look at how to fix that issue…

What Do We Mean by “Feels Like a Story”?

What makes a story feel like a story? If we took a survey, we’d probably each come up with a different answer. *smile*

Despite that, I’m going to try to identify several “big ideas” behind those potential answers. (Feel free to add your thoughts in the comments too!)

A story will feel like a story if it seems to have meaning.

A sense of meaning can come from any of the following:

That last bullet item above is more individual and subjective than the rest because every reader brings different experiences to a story, and what might resonate with one reader won’t necessarily resonate with another. So let’s focus on the first three bullets instead, as those might represent easier tips for us to follow.

What Gives Our Story a Sense of Meaning?

On some level, each of those first three bullet items are all different ways of expressing how a story can feel like it’s leading to something—that there’s a point to the story.

In the writing world, we have many terms that all refer to this sense of a story leading somewhere:

How Can We Strengthen Our Story’s Sense of Meaning?

When we’re talking about plot, some of the things we can do are obvious, just by looking at that list of elements above. We can make sure our stakes are rising, that we’ve maintained tension and pacing, and that we have turning points.

Another strengthening tip is less obvious. We can make sure that events, turning points, character choices, scenes, paragraphs, and sentences all follow a cause-and-effect chain. The plot should flow by A causing B, which then causes C, etc.

A cause-and-effect chain automatically helps prevent events from feeling random—and thus, meaningless. (Or at least less meaningful.) Everything that happens in our story happens for a reason…because it was caused by previous events. As we saw in the previous section, each event leads to something.

Going along with the above point, here’s a way we can double-check that our cause-and-effect chain is solid. We can make sure those events, turning points, character choices, scenes, paragraphs, and sentences all have “therefore” or “but” transitions.

Making sure that aspects of our story are connected—either through a “therefore/so” direct cause or by a “but” setback ensures that our story is building on previous events. It’s leading down a path and not just wandering aimlessly (and without meaning).

I recently encountered this idea in a post about revising by Chuck Wendig. (As always with Chuck, language at that link.)

His post details his thoughts about revising, now that he’s been through the process for his stories many, many times. One of his tips resonated with me because it deepens our understanding of that cause-and-effect chain and therefore/but transitions.

Under item number 18, he says (formatting changed for readability and emphasis):

“I’ve come to realize that a story…is a series of echoes.

Characters do things and say things and it creates consequences. Elements and objects appear, and they have weight and meaning inside the story…

Each piece is a rock thrown into the water and the story is about the ripples — and how ripples reach the shore.

What I mean is, when I write now I look for parts of the story that don’t echo. They have no ripples…

What parts of your story don’t make ripples? What bits fail to reverberate?

These pieces exist on their own. They don’t add to the music.

It’s like the idea of Chekhov’s Gun — the gun that appears in the first act should go off by the third. This isn’t about a gun, not really. It’s about inserting an element that echoes throughout.”

Personally, I’d call a story a tapestry of echoes, because a series implies that one happens after another rather than multiple echoes weaving and overlapping. But that’s a minor quibble with his fantastic insight. *smile*

How Can We Ensure Our Story Has Echoes?

We’re obviously not talking about the annoying kind of word and phrase echoes where we accidentally have our character nodding three times on one page. *grin* Repetition of words, phrases, or even ideas is boring, redundant, and can cause readers to skim.

Rather, “echoes” here refers to how elements of our story should reverberate throughout our story over time or through varied approaches.

Think of how we layer stories. A character who’s claustrophobic might struggle in an enclosed setting, and if we include several scenes showing them go through the same struggle, we’re not adding anything to the story. Those other scenes (even if in different enclosed settings) would feel redundant unless there’s some change in their reaction, consequences, etc.

However, for an example of how we could change approaches, we could show other ways of how claustrophobia affects them—such as how it affects their relationships, changes their language or word choice, or impacts their world view—we’re layering different aspects of their claustrophobia throughout their characterization.

We also frequently talk about threads that we carry through a story—touching on ideas from different directions or calling back to previous mentions—and this concept of echoes is the same (or at least a similar) idea.

Several ways the elements of our story can echo and reverberate include:

Here’s just one example I posted before about how we could develop a theme of trust over the turning points of a story:

In that example, we see the idea of trust echoing in both time—continuing over the course of a story—and approaches—adding layers along with growing and changing.

Why Are Echoes Important for Creating Meaning?

In the end, maybe the easiest way to understand the concept of echoes is to return to Chuck’s analogy of Chekhov’s Gun: Everything in our story should be there for a reason.

Do we need a scene that makes the heroine feel secure with the hero? Great. There are a million-and-one options to create that scenario, so let’s choose one that creates an echo to something else in the story.

Maybe it’s a scene similar to an earlier one, but her reaction is different now, demonstrating growth and change. Maybe she has an epiphany triggered by an earlier event. Or maybe it’s foreshadowing a future event in the story.

Whatever the technique we choose, the fact that an echo exists makes the scene feel more meaningful. As Chuck said, echoes of story elements take on weight and meaning within the story.

They feel like they have a purpose and aren’t just plucked randomly from a hat. They’re there for a reason. They belong.

That sense of purpose, meaning, and belonging carries over into our story. Stories always add up to more than the sum of their parts, and this is one way a little aspect of our story creates a greater sense of meaning for our story. *smile*

Love this post, thanks! The examples are especially helpful.

[…] that will leave the reader wanting more. Jami Gold tells us how to give the readers that more by making our story feel meaningful, and Jane Friedman talks about when a story ending doesn’t satisfy—sometimes on […]

How to Make Our Blog Images Tell a Story | Jami Gold, Paranormal Author

[…] images that make our articles more interesting to readers—and more likely to be shared. Just as our writing can be more meaningful with echoes and references, the combination of our words and images can make our blog posts and other writing more meaningful […]