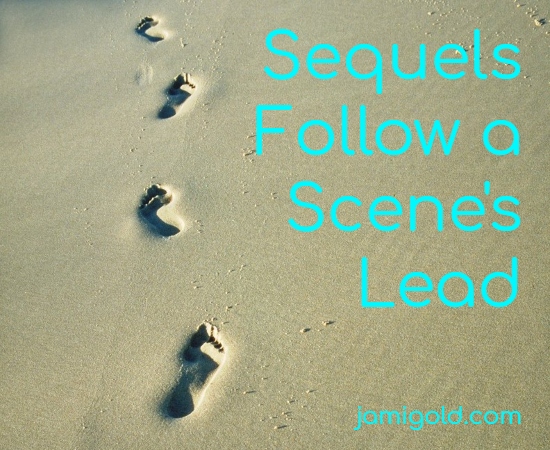 My worksheets page is most often recommended for my beat sheets, but one of the other popular tools I share is the Elements of a Good Scene Checklist. The checklist (or the matching worksheet for use with multiple scenes) helps us identify whether a scene is truly necessary and contributing to our story.

No, we’re not talking about book sequels, but about scene sequels. So before we dig into today’s question, let’s first explore the difference between scenes and sequels, as—like far too many words in the writing world—this is another concept we can think about in more than one way. *smile*

In school, we were probably taught that a scene encompasses events that occur in a specific place and/or time. When the story jumps ahead a day or switches to a different location, boom, we have a new scene. However, that definition isn’t always a perfect fit for how we actually write.

What if we write a section that changes place but keeps the same time, or vice versa with a section that jumps in time in one narrative chunk? Some writers might be confused of whether those count as separate scenes or not. (Hint: Often not.)

Or what if we jump to a new point of view (POV) character in the same place and/or time? (Hint: These usually are separate scenes. In fact, if we don’t write those POV sections as different scenes, we might be headhopping.)

Instead of dealing with that confusion, we might look for another way to define a scene, or at least look for a change in place, time, or POV. For many of us, we might simply think of a scene as the section of writing between line breaks (an extra blank line between paragraphs) or chapter break and trust our instincts to get it right.

What Is a Scene’s Sequel?

The idea of scenes and sequels came from Dwight Swain in his book, Techniques of the Selling Writer. The differentiation he makes between them is not the same as how we usually think of scenes.

As he explains, scenes are made up of:

Sequels are made up of:

In other words, Dwight defines a scene more narrowly, focused on a character’s goal, while a sequel is a transition to their next goal. That’s not good or bad, just another way of defining when a scene starts and ends.

Are Sequels Separate from Scenes?

This brings us back to our question about the Elements of a Good Scene Checklist and how it works for sequels.

“Does scene refer to scene+sequel together, equaling one scene in this case? Or are you talking about scenes being either scene or sequel? and then I use the checklist for a scene, and then the checklist for its sequel separately?”

As I talked about in my post introducing the “Elements of a Good Scene,” the list of elements makes sure all our scenes are adding to readers’ understanding of our story. If every aspect of our story, from scenes to conflicts, exposition, dialogue, etc., has a purpose, our story’s pacing—the feeling of forward momentum—is stronger.

So the question here is really about: What do our sequels contribute to the story?

Personally, the understanding of a scene that works best for me is to think of each scene as a mini-story. Each scene has a goal, conflict/obstacles, and some sort of “resolution”—which is often a reaction, a pivot to a new goal, a new epiphany or priority or worry or vow, etc. The end of the scene brings everything together, just as a story’s resolution illuminates the point of the story.

That’s how we might be able to tell if a section that jumps places or times is still part of a single scene. If the problem, goals, emotions, conflict, etc. within that section are all directly connected, and the mini-story isn’t “resolved” until the end of the section, then the section acts as a single scene.

On the other hand, if our mini-story feels incomplete, it might be because we have a Dwight Swain style of scene, but we’re missing the sequel—the reaction and new goal—that goes along with it. Sometimes, emphasizing a character’s reaction and decision to the scene’s events can add a sense of resonance, meaning, and completeness to the scene.

What about Non-Action Scenes?

All that said, there are times when we want to give readers a bit of a breather or delve more into our character’s thoughts or motivations. For those times, we might want to include a longer sequel.

How should we handle a long sequel to a scene? Click To TweetRather than writing a sequel that’s between a sentence and three paragraphs long, we might want to write a page or two or more and really dig into our character’s reaction and struggle to decide what to do next.

For example, sometimes after an intense scene or event, we might create a moment of reflection. A description of a battlefield after the conclusion of fighting could emphasize the devastation or reiterate the cost, making the character waver on their goals.

These types of sequels become scenes in their own right, many times with the usual line breaks before and after. They’re internally focused, often with the character on their own or keeping their thoughts to themselves, as the sequel-style scene explores layers of emotion.

In fact, depending on our story, the Black Moment turning point—one of the 4 major beats—is often a sequel-style scene. The negative event itself is the initial scene, and the fallout of that event—the decision to give up and the plot consequences or depression or both—is the sequel-style scene.

For sequel-style scenes, we need to keep a few things in mind to ensure readers aren’t bored by pointless “navel gazing.” *grin*

So to answer Adam’s question, a sequel will usually be the resolution of the mini-story of the scene. For those sequels, we don’t need to come up with their own purpose.

However, some sequels are emotionally separate. They have their own emotional journey or struggles or purpose for the story.

These sequels can be made stronger by treating them like normal scenes. We can ensure we write tight, create a sense of forward momentum rather than endless circling, end on a strong hook, and use the Elements of a Good Scene Checklist if we want to double check our work. *smile*

Have you heard of scenes and sequels before? Do you understand the purpose of sequels and how to use them? Does this post help explain the different ways we might use sequels? Do you have other insights into sequels or how to make them strong? Do you have any questions about sequels?

Hey Jami! It looks like I mix scenes with sequels, maybe because I read a lot of books where thoughts and reflections are integrated into the scenes. (E.g. We see thoughts after a line of dialogue every now and then. So when character A says something, character B has an emotional reaction to their words, which makes character B have certain thoughts and sometimes even memories. Some thoughts/internal monologues can be long and last several paragraphs too.) Thoughts and reflections are kind of the same as internal monologues/internal dialogues, right? I realized that I enjoy reading long-ish internal monologues, and that I could do more of these monologues myself. My dialogues tend to be too quick, so having more thinking and reflection moments throughout the scene, could slow down the pace and give the reader more time to breathe. To elaborate on this issue, my dialogues sometimes feel too choppy, rapid, and tiring to read. I re-read some dialogue scenes from my favorite books lately. While these dialogue scenes were very long, they didn’t feel tiresome; they were engaging all throughout. One reason could be because the author created a varied, pleasant pace. So the scene slows down and speeds up from time to time, rather than rushing onward with barely a break. We often talk about the problem of a scene being too slow and bogged down. But we rarely talk about the problem of a scene being too fast and exhausting to keep up with. On a sort…  — Read More »

Oh, absolutely! Not every section of introspection is necessarily a “sequel” per se. They can just be a reaction to whatever’s going on around them.

I think one of the posts I linked to above pointed out that cause-effect and action-reaction can be seen in everything from small-scale MRUs to big-scale story beats. Scenes and sequels are in between those.

As you said, I think there’s a real art to using introspection that we don’t talk about nearly enough. 🙂 Thanks for chiming in!

Hi Jami. Thank you for all of your insightful information. I am fairly new to fiction writing. I’m actually working on my very first novel now. I saw somewhere someone on another site mention being at a writers conference / contest where they were told that the current trend/s is deemphasizing the use of sequels. I wish I had saved the link/article. Have you heard anything about this?

I haven’t heard any new guidelines along these lines, but I wouldn’t be surprised if the idea was to deemphasize long sequels — such as ones beyond just a few paragraphs and almost like their own scene

Modern writing prefers that every scene has a goal and forward movement rather than a lot of introspection or “navel gazing.” So we tend to include the sequel-ish introspection of “what now” or “what does this mean for me” in a few paragraphs at the end of the scene itself rather than allowing it to go on and on or in a separate chunk separated by line breaks.

Does that make sense? Let me know if you want me to dig into the idea more in a future post. 🙂 Thanks for stopping by!

Thank you Jami. That does make sense. I’d be really interested to read a future post going into more depth.

It took me a while, but I finally did a post digging more into the purpose of sequels and how we should use them. Hope that helps! 😉

I saw that Jami. Thank you! It was beyond thorough and helpful. Thanks.