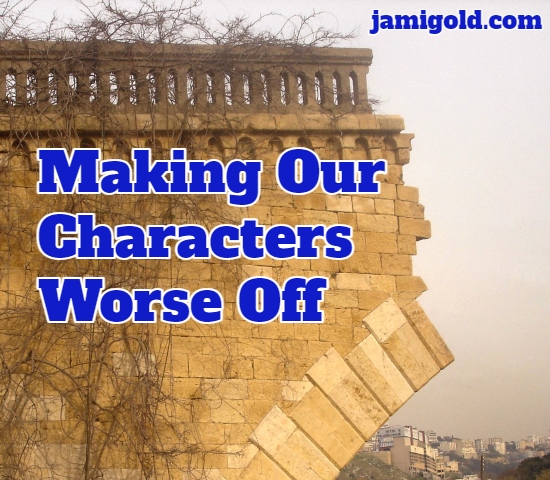 This post was originally supposed to be short and announce the winners of my 11th Annual Blogiversary contest weeks ago. However, that schedule was delayed because I didn’t want to clog up your notifications with just a fluff post.

No problem. I have plenty of writing-focused things I could post about along with the announcement, right?

…and then the Olympics distracted me.

As I’ve mentioned before, I’m an Olympics nut. No matter the sport, I’ll watch if it’s part of the Olympics. I mean, how can you resist the charms of the dressage “rave horse”? *grin* (Turn on the sound!)

So ignore how late this post is for announcing my winners, as I (finally) also share a recent realization that might help us with our story writing. *smile*

My realization was prompted due to progress on my newest “secret project” being slower than anticipated. I’d originally thought I’d need one month—maybe two—to implement the project, but as so often happens, the situation was more complex.

Sure, I needed to learn new stuff for the project, but that’s fun for me. However, I soon decided that to do what I want with the project, I first need to implement new tools (that require yet more new skills) beyond the project’s direct requirements. Yep, another big project is a prerequisite for making the most of my secret project.

In other words, I’m more behind than I was before I started. And the same problem of slow progress can happen in our stories to our characters. Let’s take a look…

In our stories, we usually need to include obstacles for our characters to overcome. If they succeed immediately at everything they attempt, the story and characters have a good chance of being boring (not to mention making the story over as soon as it begins).

Beyond that however, while story obstacles slow down the progress of our story, they also do more to help our storytelling:

Without obstacles, characters have no struggle, nothing to overcome. At the same time, “solving a problem” is a big aspect of most forms of storytelling. So in general, slowing down our characters’ progress through obstacles can be a good thing.

When we describe slow progress, we might use the saying “two steps forward and one step back.” The idea is that obstacles keep getting in the way, slowing down any forward momentum and avoiding a “too easy” storyline.

However, there’s another version of the saying:

“one step forward and two steps back.”

With that version, the obstacles are so large that any momentum is actually pushed into reverse. Or maybe, like in the case of my projects, we discover that we need to do five other steps before we can even begin on what we thought was Step One. Either way, the idea is that we end up worse off than we started.

Obviously, this more extreme version of slow progress will have a big influence on our storytelling options. So let’s talk about how we can use this “two steps back” situation in our stories…

Readers Can Relate to Being Worse Off

The “two steps back” problem is one that readers can relate to. After all, if we’ve ever worked on a big project, we’re likely familiar with this situation ourselves:

Similarly, my task list to kick off my secret project exploded once I discovered new ways to implement it…that in turn required a whole new list of tasks. And I bet most of us can think of examples of “two steps back” from our lives.

The point is that this “two steps back” situation in our stories won’t strike readers as odd or cliché because we’ve all experienced it. So readers will be able to relate to our characters’ frustrations and determination in the face of the easy-path failure. They’ll be invested in our characters’ struggles to overcome being worse off than before.

No Black Moment? Try to Create “Two Steps Back”

Remember, however, that the name of the turning point doesn’t matter, only the function it fulfills in our story. So whether we call it the Black Moment, or Crisis, All Is Lost, or Break Into (Act) Three, the point is that around the 75% mark of our story, we need an event that steals the protagonist’s hope for a solution.

Either way, the characters should seem further from their destination (goals) than before. That sounds a lot like a two-steps-back obstacle, doesn’t it?

So if we’re not sure what the Black Moment of our story is (or should be), or if we’re not sure if the beat we have is “big” enough for such a major turning point, we now know an easy way to make an obstacle stronger. We can ensure the obstacle at this 75-ish% mark in the story is in the two-steps-back style.

For a Black Moment, characters should be worse off in some way than they were before. No matter how “quiet” our Black Moment, we can at least ensure the obstacle (whether external or internal) our protagonist faces sets them back an extra step, which will help create a sense of a turning point in their journey.

For example, their new situation of being further behind can trigger them to question whether all their effort is worth it, which then adds to the sense of failure and doubt at this beat. Once they rally and push through the doubts and/or their fear of failure, the Black Moment is behind them, and we’re on to the Climax of our story. *smile*

And now, the part you’ve all really been waiting for… *drum roll* the winners from my 11th Annual Blogiversary Contest!

Congratulations to you both! You should receive an email from me within the next day, so start thinking about what prize you want. Should I be worried? *smile*

Have you experienced this “two steps back” situation in your life? Can you relate to how it might affect our characters? Have you used these types of obstacles in your stories? Does this give you ideas of how to strengthen your story’s Black Moment? Can you think of other times it would be good to use this method?

Hi Jami,
Thanks for a great, inspiring post!
I have indeed used these situations in my works. The longer the story, the deeper the pitfalls.

I learned the “add obstacles” trick early. I traded manuscripts with a beta reader on Twitter. He hurt my feelings when he said it (this was way early in my writing journey, and I hadn’t developed that thick skin yet), but he told me “Nothing ever goes wrong. About the time I thought, ‘Ooh, this will be a problem for the main character,’ they just sailed right through it. Your book is boring.” Ouch. But, lesson learned.

[…] Story Obstacles: The Benefits of Taking Two Steps Back […]