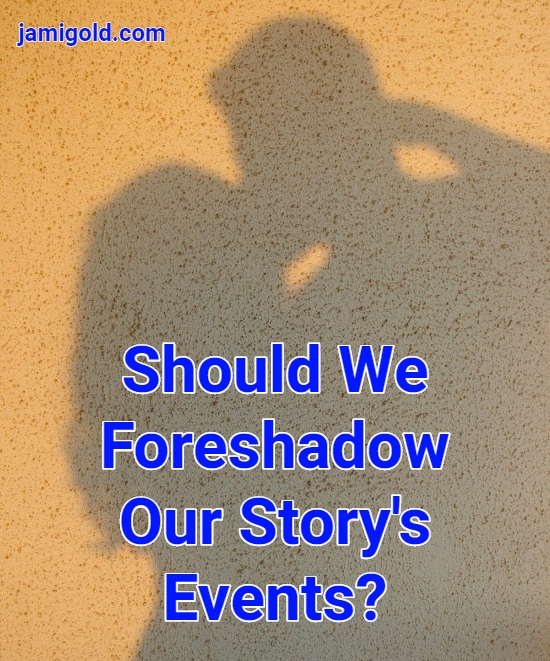 When faced with the various “rules” of writing, writers often want to know when, if, or how they can break the rules. The truth is that if our writing is strong enough, we can get away with just about anything because our readers will trust us.

As I mention in that second link above:

“A strong voice and good storytelling fills the reader with confidence, reassures them that everything has a purpose… Readers are swept along…just following wherever the story leads.”

Okay, so a strong, confident voice gets readers into our corner. What about the storytelling aspect? How can we convince readers that our story has a purposeful destination in mind, and thus that they should stick around even if we break the “rules”?

As we’ve talked about before, we want to include elements that give our story meaning. Let’s talk more about making our story feel purposeful and meaningful—with foreshadowing.

Foreshadowing? Isn’t that where we “spoil” our story in advance? Why would we want to do that?

Not quite. Romance and mystery stories can be satisfying even though readers know that a “happily ever after” or solved mystery awaits them, so genre alone can be a form of foreshadowing in that respect. But the benefits of well-done foreshadowing can go far beyond what we may think.

How can foreshadowing improve our storytelling? Click To TweetForeshadowing is a literary technique we can use in our stories that gives a preview or hint of events that will happen later. While many might think of foreshadowing for mysteries, this literary device can be used in any genre.

In fact, most stories need foreshadowing of some type to keep readers interested in what’s going to happen. That said, foreshadowing requires a balance. When used poorly, foreshadowing can make our story feel boring or predictable, but when foreshadowing is used well, readers will find our story more satisfying.

Under the umbrella of previewing future events, some foreshadowing is direct and tells readers where the story is going. Other foreshadowing is more about subtle hints that are so indirect as to often be recognized only in hindsight.

Direct foreshadowing tells readers the what, but readers still read to learn the how.

Indirect foreshadowing uses subtlety, subtext, and/or misdirection to hide the story’s future, with the truth becoming clear only in hindsight.

(Note: A red herring misleads readers without giving them any hints of the truth. Thus while it’s related to foreshadowing, it’s not the same.)

The Right Balance of Foreshadowing

As mentioned above, foreshadowing can be tricky to get right. While foreshadowing is usually good for our story, there’s a risk of creating the wrong balance.

How can we use — and not misuse — foreshadowing in our story? Click To TweetWe want foreshadowing to be strong enough that the future events feel like they “fit” the story. Readers should get a sense of events playing out in an inevitable way that makes sense. Foreshadowing keeps twists and reveals from feeling like they came out of left field or were just picked via a random generator. *smile*

Yet at the same time, we want foreshadowing to be vague enough for events to not feel predictable. Readers shouldn’t know exactly what’s going to happen before it does. Too-obvious foreshadowing feels like we’re spoonfeeding readers, or potentially even makes our story boring.

Anything beyond those two points on the balance scale can feel repetitive or lead to predictability.

The Risks of Foreshadowing

In addition to the possibility of making our story boring and predictable, what are some of the other risks of misusing foreshadowing?

The Benefits of Foreshadowing

Given the risks of harming our story, why would we want to include foreshadowing?

The Benefits of Indirect Foreshadowing

Other than the last two bullet items above, many of those benefits are found more with direct foreshadowing, such as setting expectations, increasing tension and anticipation, making readers more invested, etc. So we might ask ourselves: What’s the point of indirect foreshadowing?

If readers are only going to recognize the foreshadowing after the fact, why is it still important to include? Is it just a writerly affectation to make ourselves feel like brilliant authors? *grin*

In other words, indirect foreshadowing connects the ending of our story to the beginning (and everything in between), making our plot and/or character arc make sense. In turn, those connections make the whole story feel purposeful and meaningful.

What Do We Mean by Making a Story Feel Meaningful?

As I’ve discussed before, the following elements all help create the feel that our story is leading to something—that there’s a point to it all—which in turn, gives our story a sense of meaning:

We can make the most of all those elements by using techniques explored in that post like rising stakes, epiphanies, big reveals, turning points, etc. Together with a strong cause-and-effect chain and non-episodic storytelling, our story’s events won’t feel random.

In addition, that post also mentioned the important concept of creating echoes in our story. “Echoes” here refers to how elements of our story should reverberate throughout our story over time or through varied approaches or layers.

As explored in that post, several ways the elements of our story can echo and reverberate include:

The second bullet point—setup and payoff—is all about foreshadowing, and many of the other bullet points relate to foreshadowing as well. Whether we’re using direct or indirect foreshadowing, the idea is to set up details, events, and concepts in our story that we later pay off with consequences, growth, change, etc.

Foreshadowing—setups and payoffs—creates echoes in our story that make our story feel more crafted, more purposeful, more deliberate, and more confident. All of that makes our story feel more meaningful to readers—and thus more satisfying. At the same time, that strength of storytelling will help readers trust us and our writing—even when we break the “rules”—and that’s the point of foreshadowing. *smile*

I have a love/hate relationship with foreshadowing. I wonder if I’ll ever be any good at it — though I think it’s something I could improve during edits/revisions, rather than automatically knowing when/where to add such details. Foreshadowing is the main reason I have been so resistant to writing book 1 in my series before I have the series arc worked out. BIG things could be set in motion in book 1, if I know they are coming. Ultimately, at my level of skill, I’ve had to give myself a very rough idea of the series arc and just work on making book 1 the best it can be. (Hoping to begin writing this week or next!) I dislike the “Little did I know it would be the last time I saw him” type of foreshadowing. Why? It takes me out of the events of the story and reminds me I’m reading an after-the-fact telling, not in the midst of the story events. I love when an author manages to completely wallop me over the head with revelation(s) like Sylvia Day did in her Crossfire series. (I’m hesitant to say even that much for fear of spoiling it!). [Should I issue a spoiler alert for a movie released in 1982? Consider this it!] We recently re-watched all the Star Trek movies (well, we skipped #1), which reminded me of the leaked spoiler that “Spock dies” in The Wrath of Khan. To combat that spoiler and let the audience think he…  — Read More »

Thanks, great post!
I tend to write woven stories so there is a good element of foreshadowing. One reason to do this is to introduce a minor character who has a relatively important role near the end.
The only aspects I didn’t see you mention, are a prologue – tricky, because people like me often don’t read prologues, especially if they are in italics – and a foreshadowing dream. I remember writing this into a story (I was about ten) and I knew the reason was that I was starting at the start but I couldn’t wait to get to the dramatic events. I wanted them now. So if a writer finds herself penning in a spooky or chaotic dream instead of actual events, maybe she could rethink her story. Nothing wrong with starting in the middle, then going back to the beginning. I didn’t know that at the time.

I love foreshadowing when done right. And you nailed why I felt unfulfilled by other stuff! They seem to be setting up for some grand finale when the story abruptly ends — wrong stuff to foreshadow.