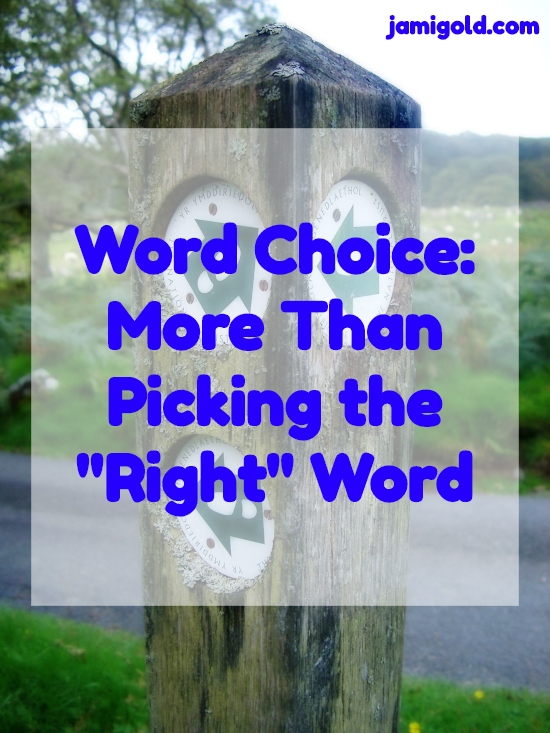 In the writing world, one of the terms that we often hear in tandem with point of view (POV) and voice is word choice. Like many things in writing, what the term means outside of our writing sphere isn’t quite the same as what it means within the context of writing.

So in the comments of my previous post, Sam asked me to do a post about word choice. Great idea, Sam! *smile*

I haven’t done a post specifically about the topic before, so let’s talk about word choice. What does word choice mean, how does it affect our writing, and what goes into choosing the right words?

What Is Word Choice?

Not surprisingly, when talking about word choice, we’re referring to the words we choose to use in our writing.

But for as simple as that sounds, the choices we make determine many important aspects of our storytelling skills. Let’s take a look…

We’ll get more into other ways word choice affects our writing in a bit, but let’s start with the three biggies…

The concept of word choice plays heavily into the POV of our story and scenes. As we explored last week, the POV for a passage can affect the words used based on what the character notices (or doesn’t notice) or what’s important to them or the emotions evoked.

Beyond that understanding, if we’re writing in omniscient or with a shallow POV, the words we choose to use will likely be in line with our authorial voice or the voice of our omniscient narrator. So the author or narrator POV will determine which words fit best.

However, if we’re writing in a deeper POV, such as with 1st or a deeper 3rd person POV, the words we choose to use (outside of other characters’ dialogue) need to be in line with our POV character. If our POV character would never use a word, then we shouldn’t use it in their deep POV.

At worst, if we make word choices that don’t fit our deep-POV character, those words could feel like as much of an authorial intrusion as if we—the author—broke the fourth wall to speak directly to the reader. Even if the effect on them isn’t quite that bad, readers could still be taken out of our story by the intrusion of an out-of-character word or phrase. Readers might experience cognitive dissonance, wonder how the character knows that word, or try to figure out if the character is using the word ironically or mockingly, etc.

How do our word choices affect our story and our writing? Click To TweetAs we discussed a few weeks ago, we also have to take into consideration how our POV affects the use of non-English words. If our POV character would think using a non-English word was no big deal, should we really italicize it like the usual rules say? Or should we find another approach to have their choice of words better blend with their POV? As with other aspects of word choice, there’s not necessarily a right or wrong answer, only what we think fits best for our intentions.

We might also think about a character’s POV when it comes to capitalization rules for our choice of words. For example, I need to think about my characters’ religious beliefs when deciding whether to capitalize the word “god” in their POV. Some of my characters would capitalize the word and others wouldn’t, so even with the same word choice, the implication can change, depending on the character and their perspective.

Voice is often a nebulous concept, but as I’ve said before, voice is what invites readers to join the characters in their journey. No matter the POV we use, some aspects of our voice as an author carry through various elements of our writing:

However, while some aspects of the style of our story’s voice aren’t affected by our POV, other stylistic aspects are related to POV. So in some cases, the style of our story’s voice must reflect the literal voice or sense of a person behind the words, such as the voice of the deep-POV character or the narrator, rather than our own voice as author.

Whose voice should we use when choosing words in our story: ours or our characters? Click To TweetHow can we know whether to write in our voice or our character/narrator’s voice? In any story, we can break down different elements of writing for our sentences: dialogue, direct internal thoughts, actions, exposition, emotion, descriptions, etc. As we’ll get into next, dialogue (and direct internal thoughts, which follow the same rules) follows the voice of the character, but what about general narration, such as action, exposition, emotion, or description-oriented sentences?

The word choices in the second example help create that sense of a specific voice:

Going along with word choice and voice, we also need to consider how word choice plays into dialogue. No matter what POV we use, the word choice in the dialogue of our characters should always reflect that character’s voice.

What should we keep in mind when determining the word choices of our story? Click To TweetFor example, the dialogue of a secondary character shouldn’t be in the protagonist’s voice, just because the protagonist is the POV character for the scene. Dialogue should be the exact quote of the speaker, not a paraphrase by the POV character or author. The only exception would be if quote marks aren’t used, letting readers know it’s just an approximation of the dialogue.

That means even with the shallowest POV, the dialogue for each of our characters should sound different to readers. Again, if the character wouldn’t use the word, it shouldn’t appear in their dialogue. As mentioned above, an elderly person and a teenager would not express themselves the same way in their dialogue.

The same goes for direct internal thoughts. Character internalization is essentially the ongoing internal monologue in the character’s head, so even though it’s silent, it would still follow the same rules as dialogue when it comes to voice and word choice.

What Should We Consider to Choose the “Right” Words?

In addition to the big writing elements of POV, voice, and dialogue, word choice affects our writing in many other ways…

Note that these questions below don’t all have a right or wrong answer. Some are just things to keep in mind as we develop our voice:

Common Word Choice Issues to Watch Out For

We also need to watch out for issues with our word choices:

All that said, we often won’t choice the perfect word while drafting. When we’re in drafting mode, we might just reach for the first word close to what we’re trying to say, and that’s okay. Editing, specifically the steps of line editing and copy editing, is the time for us to really focus on our word choices to create the perfect impression for readers. *smile*

I think one thing that wasn’t addressed was dialect. Much as I love Mark Twain’s Tom Sawyer and Huckleberry Finn, it’s horrific trying to read the books, and even with today’s writers, it often becomes an exercise in translating rather than reading. My personal preference is to use a few key words of dialect often enough to remind the reader of how the characters talk, but no more than that.

Yes, good point! I touched on dialect a bit in the non-English words post I linked to above, but you’re absolutely right that word choice plays a role as well.

And your recommendation here is spot on as well 🙂 We want to give a flavor of each character’s speech patterns (no matter the style, dialect, non-native language situations) through syntax, structure, and yes, word choice. However, a “flavor” shouldn’t make our writing difficult for readers to understand. Thanks so much for chiming in!

This really came home to me when I changed the POV of one short story from deepish third to first person. I had been using straightforward language to describe the (uneducated) person’s innner workings, but finding phrases that person actually would think in was quite a step further.

I really enjoyed this post, and it’s timely owing to the fact that I’m just starting to edit my latest wip.
Thank you.