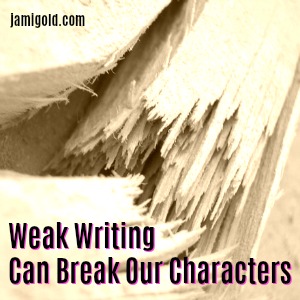 Readers can interpret our characters as being weak for many reasons. They might come across as passive, not acting on the plot or exhibiting agency. They might take foolish actions, being “too stupid to live.” Or they might lack a strong arc, showing how they’ve grown and bettered themselves.

Another way a character might seem weak might be surprising: A character can seem weak when we use weak sentences in our writing. Let me explain…

The words and sentence structures we use can act in a subtextual or subconscious way to give readers the impression of weakness. That weakness can reflect badly on us—the author—which is bad enough.

Many writing techniques require a sense of confidence and competence to come through our words for readers to trust that we’ll deliver on our author promises. However, weak writing can also reflect badly on our characters, making them seem more wishy-washy than we intend.

Let’s go through a few examples of ways we can strengthen our writing—and thus, strengthen readers’ impressions of our characters—starting with the most obvious and working our way to the most subtextual.

We may have heard the advice before to avoid “weasel” words in our writing. Weasel words are vague, weak, and wishy-washy such as…:

In most cases, either something is or it isn’t. Using a vague word undermines the point we’re trying to make.

If we’re trying to emphasize a near-miss or a character’s assumption, weasel words can make our point:

But if we’re trying to make a statement, such as indicating what a character actually does or thinks, weasel words weaken our writing:

If our characters think or speak with unnecessary weasel words, they can come across to readers as unsure of themselves or their thoughts. A hesitant or tentative character won’t seem as strong.

Obviously, we could use this technique on purpose to show when a character is unsure or lying to themselves, but that approach will only work if the rest of our writing avoids these words. Otherwise, readers will just see more of the same and not follow our intentions.

Some words or phrases could be worded more clearly, which would also make our writing stronger. For example, words like it, this, that, these, and those can all leave the intended meaning ambiguous.

In the case of other types of pronouns—such as demonstrative pronouns: this, that, these, and those—we would at least want to check for clear antecedents. Again, however, our sentences might sound stronger if we add a clarifying noun.

Again, we might want our characters to seem hesitant sometimes, but readers will only come away with that impression if that section of writing is different from the rest. The point, as with many things writing, is to write with purpose.

Even though I’m a developmental editor and don’t specifically look for line and copy editing changes, if a client’s writing could benefit from the advice, I’ll often point out a few examples of sentences that could be tightened.

Like the other examples above, tighter writing sounds stronger, more definitive. We sound more confident as an author, which can help us convince readers that our story is worth listening to or deserves the benefit of the doubt. In the same way, wordiness can affect readers’ impressions of the “worthiness” of our characters and how much they deserve our readers’ attention.

Wordiness tends to clutter sentences with unimportant details. Just as an overly chatty friend can make us tune out—which is mildly disrespectful—readers can tune out and lose respect for our overly wordy characters.

Many of the examples above fall into the category of sentences with compound verbs, but only one of the verbs is strong. In most of those cases, we’d be better off ditching the weak verb unless it’s absolutely necessary for clarity.

Other Weak-Writing Issues to Watch Out For

Telling readers that a character is strong and determined won’t do any good if we’re showing our character through weak writing. We’ll undermine their personality strengths if our writing for them—descriptions, narrative, dialogue, actions, etc.—is wishy-washy in the slightest.

Hmm, though I recognize many of the above examples in books, no, these words and phrasings never gave me the impression that their characters are weak… I guess to me, what the author writes is independent of how the character actually is. The author might have mis-transcribed what the character really thought or said! But I’m not saying that all readers think like I do, though. Only talking about myself as a reader. As a writer, I tend to be very utilitarian. I don’t believe in rules, and instead like to judge and treat everything as a unique case. So while in many situations, I think it would be good to make the sentence more concise (to make the sentence easier to read and sometimes to create a more pleasant rhythm), I do see that in some other situations, it’s best to keep that sentence long, due to whatever reason. I’ll admit now that it’s a lot harder to judge what’s “right” or “wrong” if I don’t rely on rules, but–for me, I’m happier and wiser when I focus on the specifics of the case at hand! This utilitarian approach of mine doesn’t necessarily mean less work for me, however. I definitely need to think a lot more, and if all my beta readers say X is okay, I might disagree with them and think X is NOT okay, and so I spend a lot of time editing X, lol. I don’t always disagree with people, though. Btw, I’m not…  — Read More »

Thanks for this post Jami. As well as being helpful, constructive advice I found it really interesting and it brought up one or two points I hadn’t thought of.

Greetings,
Awesome post. OMG. I have made every mistake you have listed here, so am really grateful that solutions are included.
The list of strong verbs is–N-I-C-E! 🙂
The trick for which I have yet to discover the treat is self critique. Oops-ies are difficult to see. Still, this post gives good fixes.
Thanks Jami. Great image at the top, by the way.
Stay Well,
Donovan

I’ve read a lot of bestsellers with all the weaknesses you listed. But they’re published and on the bestseller list! How does this happen? I work hard to make my writing strong and your suggestions are spot on. However, I’m not on a bestseller list. There seems to be a lesson here…hmmm.

Thanks. I hadn’t thought of keeping a look out for too many prepositional phrases. Also, I had never even considered replacing it/they/them/etc with clarifying nouns. Recently, I did notice ups and downs were unnecessary. I also recently noticed I can say “I blinked,” and I don’t have to add “my eyes.” Duh. Same with waved (my arm). I have become aware that one can skip things like I turned. But, I’m not sure how to do that, how much to abbreviate the action.

[…] voice, and setting. Jami Gold explains how we should deal with character stereotypes, and how to strengthen our characters with strong writing. Padma Venkatraman writes about voice: writing lean, spare, or lush, rich, and Tasha Seegmiller […]

[…] believable characters is always a challenge. Paranormal author Jami Gold offers some advice in: How to Strengthen Our Characters with Strong Writing on her […]

Do you accept editing contracts?

I’m not sure what you mean by the question, but you can find information about my editing services here. Feel free to contact me through the form on that page with any questions. Thanks!

I’m getting it. I appreciate the advice. It’s all good.

What Is Line Editing and What Should Line Editors Do? | Jami Gold, Paranormal Author