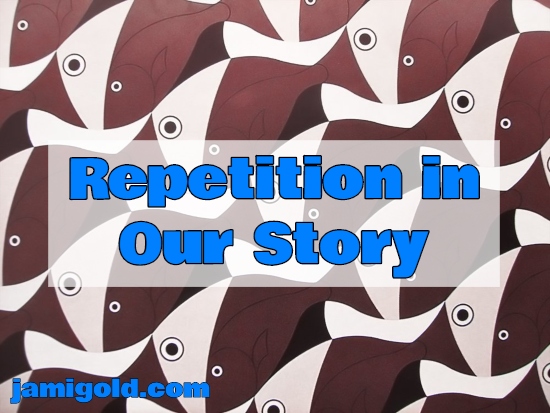 Once I start reading a book beyond the Look Inside feature at Amazon, it’s rare for me to DNF (did not finish) a story. If I DNF a book later in the story, it’s usually because something pushed it into a “hate read” category.

In other words, for me to give up on a book, I have to actively be rooting against the ending I know is coming. I’ve been known to root against a massively too-stupid-to-live character, but more commonly, the issue is a main character who behaved in unforgivable ways.

However, as I said, a DNF is rare for me—but that doesn’t mean I like all the other books I finish. I’m a completionist, so I tend to finish books even if I’m aggressively “meh” about them. These meh books are ones where the writing is poor and the craft is marginal.

One topic that hit me over the head (again and again and again) recently was the problem of repetition and redundancy in our writing, which made me consider how we can avoid the issue. Given how much time I don’t have, I should DNF more often. But at least I’ve learned to turn my completionist nature into lessons of how we can improve our writing and craft. *smile*

One reason we might miss repetition problems in our story is because there are several ways redundancy can sneak into our writing. Some are small in scale and others are bigger and require a zoomed out view of our story.

Alliteration is the repetition of the beginning sounds of words. For example:

The tall tree tangled in her hair.

Generally to “count” as alliteration, the same sound must be used three or more times in a sentence. So the T sound of tall tree tangled would count, but the H sound of her hair would not.

Should We Avoid Alliteration?

And that’s the key—using alliteration on purpose.

What are 3 types of repetition in our stories and how can we avoid them? Click To TweetSome rhetorical devices use alliteration (or alliteration-like techniques, such as anaphora) to emphasize and draw attention to our words. So alliteration as a technique isn’t inherently bad.

How Can We Avoid Alliteration?

If we’re careful readers during edits, we might be able to find this type of repetition on our own. We’d simply keep an eye out for repeated letters at the beginnings or words.

Otherwise, we need to rely on feedback from editors and/or beta readers. I’m lucky that one of my editors is especially sensitive to alliteration—in a nails-on-chalkboard way—and she catches my unintentional uses of this type of alliteration.

Word echoes occur when we repeat the same word or short phrase in close proximity, page-wise. For example:

He twisted to meet his attacker. A sharp pain cut off his breath, and his plans to confront the man disappeared in a gasp.

The camo-clad attacker pushed a knife deeper into his abdomen and gave it a twist.

Even though most of us don’t read aloud, we often still “sense” the words in our head. That’s why we talk about the rhythm of our sentences.

Because of that virtual auditory sense, we might “hear” echoes of repeated words as we read. With that example above, the word twist(ed) could create an echo in the minds of some readers.

Should We Avoid Word Echoes?

We all know that basic words—everything from the to hand—have to be used over and over on the page. There’s just no avoiding many words. That said, we still try to structure our sentences to avoid unnecessary repetition (such as if I used the word repetition more than once in a sentence *grin*).

However, with less common words, using the word more than once a page or two can be noticeable to readers. In addition to the problem of drawing readers’ attention away from where we want it, this type of repetition is noticeable enough to pull some readers out of our story by breaking their immersion.

How Can We Avoid Word Echoes?

The usual cause of word echoes is simply the fact that our brains are lazy. No matter how big our vocabulary is, we tend to rely on a much smaller collection of words if we’re not actively reaching for alternatives.

Worse, when we find a good, strong word, we might not notice that we’ve gotten stuck on that word and used it over and over. A strong word used once is great. Repeating it in proximity is just a different flavor of lazy.

It’s often very easy to repeat ideas, which results in redundant information. Think of the times that we tell readers things we’ve told them before.

Sometimes it’s helpful to repeat description tags like “her brother Jason” for secondary characters if it’s been a chapter or more since their last appearance, and readers might not remember the context of who the character is. However, we want to be careful of repeating information unnecessarily.

Redundant information can sneak in on the small scale (“She sat down.”—we usually don’t sit up), but it’s especially tricky on the idea scale.

For a few examples:

Should We Avoid Repeating Ideas?

In general, we should always avoid repeating ideas. The information is redundant, so readers can get bored or feel like the author is talking down to them. (“Yes, author, we got that she’s really scared of trusting anyone the first dozen times you mentioned it.”)

How can repetition hurt our stories? How can we avoid the issue? Click To TweetIn other words, this type of repetition can be enough for many readers to DNF our story. It hurts our pacing and can feel like we’re trying to pad our word count to justify charging more for our work.

Worse, a strong story follows a cause-and-effect chain, and failing to follow the forward momentum of a story or a growth arc breaks the chain. So the entire story feels weaker when a character seems to need to relearn the same lesson over and over or backslides without a reason.

As I can attest from my recent read that suffered from this problem, repeating information in scene after scene is frustrating and insulting. At best, readers will skim, and most readers would probably DNF. Either way, a bad review is likely.

How Can We Avoid Repeating Ideas?

This type of repetition is frequently the hardest to uncover. Unlike searching out repetition at the sentence, paragraph, or page level, we need to be aware of what we’ve already covered with the reader over the whole story. Also, unlike our quest to look for repeated words or sounds, this type of repetition doesn’t necessarily use the same vocabulary.

Instead, we have to ask ourselves:

Often this type of repetition is a result of our writing or editing process. Going back to what might have caused our examples above…

Being aware of our processes and how they might lead to redundant information can help us know when to ask those questions above. Beta readers and/or editors can often point out redundancy issues.

(That said, the book that triggered this post with a DNF level of repetition was “professionally” edited by a traditional publisher. *sigh* So we should learn how to find as many issues as possible ourselves because we can’t always rely on others.)

Also, notice that my examples above all are more internal/character related. While it is possible to repeat plot information, we’re more likely to repeat character information: emotions, realizations, decisions, debates, fears, beliefs, etc.

Plot events usually have a clear first-this-happened-then-that-happened structure that prevents too much repetition. In contrast, there’s often not just a single place a character insight could fit, so it’s easier to repeat ourselves during character-focused paragraphs. During editing, we should pay close attention to the point of our character-focused paragraphs and watch out for points we’ve already made.

No matter the type of repetition we’re talking about, we want to be as conscious as possible with our writing. Unintentional repetition causes nothing but problems with both pacing and craft, but a technique that we use on purpose can help our story as long as it creates the effect we intended. *smile*

A real repetition trap comes when a character needs to tell another character what happened. And the reader already knows. Shortcut the conversation, don’t be tempted to hide behind reactions from character B as justification.

She wanted to know why I was sad.
I explained about Mary. ‘It’s put me in a strange place.’

She wanted to know why I was sad.
I told her about how Mary wanted to go out but I needed to study and she argued that I spend too much time with my head in a book and Mary stormed off.

I find the easiest way to find numbers 1 and 2 is to read out loud. Nothing trips up the tongue more than alliteration, and redundant words practically scream out when said aloud.

The repetitious ideas is something I sometimes struggle with – but most of the time, I find that I’m expanding more than repeating. Something has happened that alters the feelings or mindset of the character, but hasn’t changed the essential idea. So then I don’t feel quite so pressured to re-write. But I do have to keep that in mind, so I know when there’s actually an alteration and not just more of the same.

I DNF’ed a book once because the author went to inordinate lengths to avoid repeating… said. It got completely ridiculous (‘”Welcome home,” he greeted.’).
But I agree with Star: the best way to avoid 1 & 2 is to read aloud. And in my experience, the best way to avoid repeating ideas is to have someone else read out loud. There’s a momentary silence and then they look at you and say “didn’t you already cover that?”