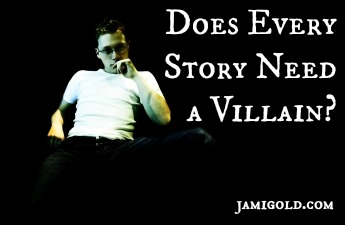 Conflict is one of those words that can be hard for new writers to understand. We all think we know what it means, but the writing-world meaning doesn’t quite have the same connotation as the non-writing meaning.

Outside of the writing world, the word conflict often evokes images of fist fights or screaming matches. So new writers—when they hear the advice to include conflict on every page—might imagine that they need to include lots of arguments in their scenes.

However, in the writing world, the word conflict can be used more generally. It’s only after understanding how broadly we can view conflict that we’ll be able to understand the difference between antagonists and villains in storytelling. Let’s take a closer look…

What Is Conflict in the Writing World?

Among writers—and therefore within writing advice—conflict can refer to any situation where:

In other words, conflict is everywhere.

In real life, we see this style of conflict constantly…

What Is an Antagonist?

An antagonist is any thing that has different goals from our protagonist or widens the gap between “want” and “have.” Notice the word thing…

Under that definition, we can see how most novels would have several antagonists. Depending on a story’s length and complexity, a story would typically have anywhere from one to a dozen or more antagonists.

Other than in a slice-of-life-style story, even the shortest flash fiction would usually have at least one antagonist. Antagonists create the struggle and conflict that develop our protagonist and add tension to our story.

Villains Are Just One Type of Antagonist

The point of antagonists is like the point of most stories’ plots. Plot reveals our character, and similarly, antagonists give the protagonist a chance to show what they’re made of.

Our protagonist’s inner strength and character is revealed by how they react to the struggle, how they rally or give up, how they fail and try again. It’s those characteristics (or lack thereof) that demonstrate whether our protagonist deserves to be called a hero. *smile*

Have you ever wondered about the definitions of conflict, antagonist, or villain in storytelling? Do these explanations make sense or do you need more information? Can you think of any other types of antagonists? Are you usually able to develop a list of 8-12 antagonists in a novel-length story? Or do you struggle with identifying your story’s antagonists?

The short questionnaire I use for myself (to identify my plot core for short stories) is focused on the protagonist/antagonist thing. “What does X want? What does Y want? How do those goals conflict?” is about half of the questionnaire. 🙂 Sometimes that conflict is direct, but sometimes it isn’t.

One planned novella series looks as if it’s gonna even have some stories where the antagonist of one is the protagonist of another. Some of the antagonists in the series are villains; some are minions. Some are just other characters who pretty much have to oppose the protag, for whatever reason (philosophy, job, etc). That’s gonna be fun. 🙂

Yes, “how do the goals conflict” is a great way to look at it. Bob Mayer has an explanation on YouTube of how to ensure the goals and conflicts overlap between characters. His video is more about the villain than an antagonist, but the insights can still be applied to other characters.

Oh yes! I’ve seen several romance series where the antagonist of one books (maybe a discouraging sibling) is the protagonist of another, but it’d be fun to see even more conflict with the antagonist being flipped. 🙂 Good luck with those stories, and thanks for sharing!

Excellent points about the need for conflict in a story, and how it can be achieved in many ways. That’s what makes writing endlessly fascinating and challenging.

Of course, the fun really begins when one conflict magnifies another. Look at Jack London’s To Build a Fire. Nature is a deadly antagonist, but only because of the protag’s ignorance of his situation, which we can think of as a conflict between what dangers the protag faces and what he THINKS he faces. And then comes the bigger point that few of us really comprehend mankind’s tenuous situation in the universe, which is what ultimately leads to the protag’s death.

Great insights! Yes, a character’s internal conflict (such as ignorance) can certainly intensify the conflict of other antagonists (such as nature). Thanks for sharing! 🙂

Thanks.It’s been of great help.Am writing and I didn’t know how to go about developing confict.

I’m happy to help. 🙂 Thanks for stopping by!

A Sidecick or a Mentor can also act as Antagonists at some point of the story.

I’m happy to help! Thanks for stopping by. 🙂

Oh I love internal conflict the best, when a character holds conflicting beliefs, values, goals, or desires. Moral dilemma situations are super fun too. So the character wants to do the right thing, but they see that both possible courses of action are wrong in some way, so that’s frustrating for them. Kind of a what they want-what they have gap.

Lol I realize more and more that though I’m writing a romantic comedy, it’s highly untraditional in that though the romance is important, it’s not as important as you would expect in a romance novel, lol. There’s a lot of focus on the action-adventure, beating the villains and minions plotlines, and also lots on platonic character relationships (friendships, parent-child bonds, etc.). So the romance can be a bit pushed to the background…lol. So I think my romance couples are less antagonists to each other than in most romances, hahaha. Though they can still cause difficulties and frustrations for each other due to different goals, beliefs, value systems, etc. Like the heroine being annoyed that the hero is so cold and antisocial towards most strangers, lol.

One thing that’s interesting is how much the different subgenres of romance emphasize the romance part of the story differently. In some subgenres (contemporary, historical, romantic comedy, etc.), the romance might be 80% or more of the story. In other subgenres, which are often more “plotty” (paranormal romance, romantic suspense, romantic thrillers, action/adventure romance), the romance might be closer to 60% or so of the plot. (Or depending on how it’s defined–does every scene where they’re together count? or just the scenes where they’re advancing the romance?–it might even be only 40% or so.)

So it’s hard to define what’s needed to make a plotty story a romance. 🙂 That’s a good question though. LOL! Thanks for the comment!

Ah, I think that might be the confusion, because my story is both a romantic comedy and an action-adventure romance, lol. So you could say thematically, the romance is pretty important, but for the amount of words actually dedicated to advancing the romance arcs, then the romance is approximately on equal footing with the action-adventure part. Does that make sense? Haha.

Btw, I see my story as romantic comedy because not only do the protagonists get a romantic happy ending, their romance and other interaction scenes also tend to be quite light-hearted, sweet, and sometimes even funny, lol.

Yes, and action-adventure romance can have a lot of plot going on. (I always think of Romancing the Stone for that category. 🙂 ) So I’d say that your breakdown of percentages isn’t unusual. Interesting–thanks!

I’ve been reading a lot about structure and plotting. Everyone says cut any scene that has no conflict. This can be confusing to a new author who doesn’t understand the scope of conflict. Conflict can even happen inside a character’s head. Thanks for a really clear definition here. Very helpful.

Exactly! If we define conflict too narrowly, we might not understand how all the pieces fit together to make a whole. 🙂 Thanks for the comment!

[…] ago, her posts helped me understand antagonists and villains (and how they’re not the same). So with her permission, over the next few weeks, I’ll be sharing her insights on […]

[…] I love how clearly you lay out these different faces of antagonism. It’s easy to focus on the villain-style of antagonists because they’re obvious, but the …. […]

[…] conflict often evokes images of fist fights or screaming matches. However, in the writing world, conflict can be used more generally to describe a gap between what characters want and what they […]

[…] written before about the different types of antagonists—from sidekicks and mentors to ticking clocks and and traffic jams. And last year, Kristen Lamb […]