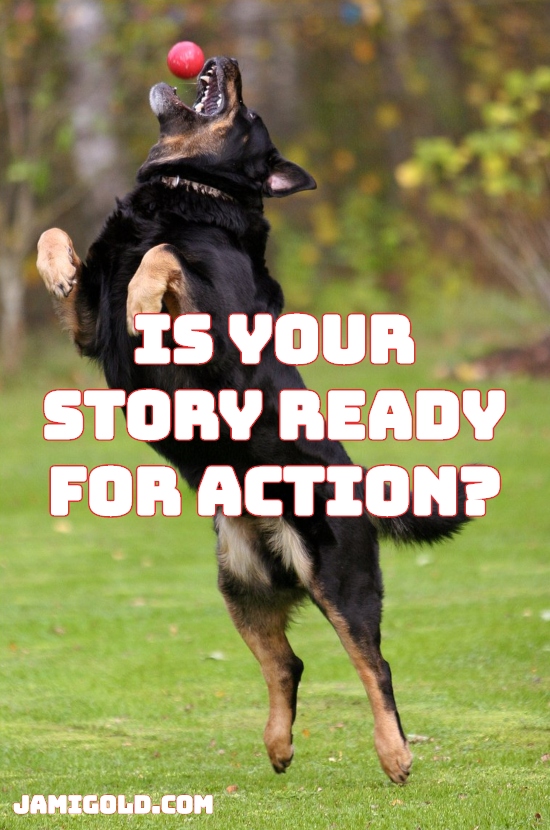 A bit over a month ago, we covered the basics of dialogue formatting. As I mentioned in that post, one of the main things we need to accomplish when formatting our story’s dialogue is ensure we’ve clearly attributed who said what.

The first method we explored was dialogue tags (sometimes called dialogue cues). Dialogue tags not only let readers know which character said the quote but also share tone of voice and other cues for how the words were spoken (such as she whispered).

However, as we noted in that post, dialogue tags are somewhat limiting for what they can add to our writing or for avoiding repetition. After all, while said is often considered “invisible,” there’s a limit to how invisible it can be if it’s repeated every other sentence. *smile*

That’s why, as I mentioned in the post, I prefer using action beats for dialogue attribution whenever appropriate. Action beats are more flexible for our writing, adding details to our story and immersing readers in the scene. Let’s take a look…

Recap: What Are Action Beats?

Action beats are sentences adjacent to dialogue that contain a character identifier and any type of verb:

Susan wrung her hands. “What do you think we should do?”

The character identification in this sentence adjacent to the dialogue—here it’s Susan—lets readers know who said the words. Simply by appearing in the same paragraph as the quoted words, this sentence attributes the speaker of the dialogue.

Action beats are the key to preventing our dialogue from being just talking heads floating in space. Their varied verbs and sentence structures also avoids the problem that endless “saids” can cause.

As I mentioned above, action beats are far more flexible than dialogue tags. The verbs used in tags are limited to those letting readers know how the dialogue is said, and many editors frown on tags that create tricky speaking situations:

“I don’t know what you were thinking,” she laughed.

Laughed, smiled, frowned, etc. are all verbs commonly questioned by editors along the lines of: Can the character really say this at the same time as laughing? So as writers, we’re left to wonder if it’d be better to add an adverb like “she said laughingly,” even though adverbs are often looked down on as well.

How are action beats more flexible for our story than dialogue tags? Click To TweetIn contrast, action beats can use any type of verb—despite the name of the term, we’re not limited just to action verbs to do the job of dialogue attribution. In the case above, we’d simply need to make “she laughed” a separate sentence from the dialogue itself. In addition, as separate sentences, we can use any type of sentence structure to help mix things up and avoid repetition.

Those two attributes alone make action beats more flexible than dialogue tags, but their flexibility goes beyond that. Action beats can also add layers to our character development and scene setting that help immerse readers in our story.

6 Ways to Use Action Beats in Our Writing

Given the name of the term, it’s not surprising that one of the things we can do with action beats is describe action. In this way, action beats are also more about showing, while dialogue tags are more like telling.

The action can be similar to how actors “block” out their movements in the space around them in a scene. Action-focused action beats are the choreography of a character interacting with their environment.

This style of action beats is the most important for preventing our dialogue from becoming just talking heads floating in space and for immersing readers in the scene. With action beats, readers can see the space—the room or other setting—along with any furniture, props, or other objects, and they can imagine the scene as they read.

Obviously, some of the action-focused examples above hint at a character’s emotional state through body language. However, the sentences used to attribute dialogue can also convey a character’s thoughts and emotions more directly.

As those types of sentences are less “action-y,” some might question whether they should be considered action beats at all, rather than just general narrative sentences. However, they’re also all emotional cues for how the character said the dialogue.

Essentially, they replace potential adverb-filled dialogue tags such as she said reluctantly/enthusiastically/firmly, etc. Even though these sentences reveal internal thoughts and emotions, they’re closer to showing than the telling of the tags they theoretically replace—at least from a reader’s perspective. By considering sentences of this purpose as action beats despite their internal focus, we can see just how much flexibility we have with action beats for dialogue attribution.

As mentioned in the previous method, when it comes to non-POV characters, we can’t directly let readers know their thoughts and emotions, but we can hint with subtext.

With a POV character or not, we can also add subtext with a mismatch between a character’s dialogue and their actions, thoughts, or emotions.

Long chunks of dialogue can be intimidating on the page. Yes, we can technically break up long dialogue passages by a single character into multiple paragraphs, but that’s often clunky for readers.

The proper way to format successive paragraphs of dialogue by one character is to use open quote marks at the beginning of each paragraph and use a close quote mark only at the end of the last dialogue paragraph:

However, readers often miss that cue of the lack of a quote mark at the end of the previous paragraphs. So they assume the paragraph break signals a new speaker, and they might need to backtrack and reread, pulling themselves out of our story.

Instead, action beats can be sprinkled throughout a long passage of dialogue. As action beats also fulfill the function of dialogue attribution, we can then break up dialogue into multiple paragraphs and avoid reader confusion because each paragraph’s speaker will still be clear.

“Blah blah blah.” She grimaced at the thought.

“No.” She squared her shoulders. “Yadda yadda yadda.”

Action beats can be used to speed up or slow down our story’s pace. Too many action beats will slow down our pace and can interrupt the flow of dialogue. Readers don’t need to know a character’s actions, inner thoughts, or reactions with every dialogue paragraph, much less every line of dialogue. Banter, arguments, and other situations need a faster flow.

What are 6 ways action beats can improve our story? Click To TweetOn the other hand, if dialogue flows too fast, readers might not fully absorb what they’re reading or what characters are revealing. In that case, we can add an action beat to make readers slow down.

Along similar lines, action beats allow us to set the rhythm of dialogue. Pauses, hesitations, reactions, looks away, shifting feet, etc.—they all work together to create not just the pace, but also the rhythm of a character’s words.

Going along with the previous method, using action beats to break up long chunks of dialogue into multiple paragraphs helps create a rhythm and flow to carry readers through a long passage. Shorter paragraphs and pauses of action beats are easier for readers to parse and understand.

Obviously, a sentence can fall under multiple categories. Any style of action beat will affect pacing and rhythm. Even the most action-focused sentence can reveal emotion or subtext, etc.

Sentences can also mix two styles together, such as a phrase of action and a phrase of emotional insight:

The Risks of Action Beats

In addition, by trying to avoid dialogue tags, we might lean on “empty” action beats that don’t move the story forward or add layers or understanding to characters, emotions, or events. Every sentence in our story should serve a purpose, and action beats are no exception.

They shouldn’t be used to do the equivalent of giving our characters busy work. Readers see any details we share as important, so pointless details just waste reader attention. Action beats work best if they’re creative and add value to the story.

When used properly, however, action beats can add to our story. They can help evoke emotions from readers, such as by increasing the tension in a scene. They can help us describe settings and characters without info dumping. They can add more showing to our storytelling.

As I mentioned in my previous post, I’ve found that pushing myself to use action beats rather than dialogue tags helps me include more body language, setting details, emotional cues, character thoughts, etc. In other words, action beats encourage me to dig deeper and add layers to my narrative.

So the key, as with so many things writing, is to find a good balance. The “right” balance will depend on our story and its pace, our voice and style, and our need for descriptive details. Once we find that balance, action beats can help us improve our character development, our overall story, and our readers’ engagement. *smile*

How much do you use action beats rather than dialogue tags? Is there a method you use more than others? Do all the methods make sense to you, or can you think of other methods to add to the list? Do you ever struggle to come up with creative action beats? Do you have any insights into action beats to share?

Thanks Jami, great post.
Some authors believe ‘said’ is invisible, and save the actions for emphasis.
The POV makes a huge difference, as the character’s in-head thoughts can fill in the details.

I try to mix action beats with dialogue tags (or occasionally neither when there are only two people speaking). Sometimes I think I fall too heavily on action (or emotion) beats. I tend to use too much nodding, smiling, shaking head, or sighing. This is something I look for in my editing process, though. Thanks for giving me more to think about. Mixing up the different types of actin beats is helpful advice.

Great post, Jami. I’m part of a critique group and one writer. Has picked me up on dialogue tags, suggesting I use more action beats.
I agree that you can bring things to life more with them, and avoid the dreaded talking heads.
I also disagree with the thought that said is invisible. Too many draw attention to themselves and pull the reader out of the narrative.

Thanks so much for this column. Action beats do make all the difference, I believe, between bland copy and an engrossing story.