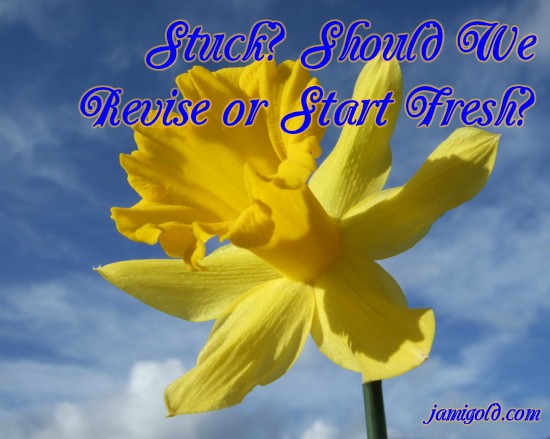 No advice is “one size fits all.” Even the best, most helpful advice isn’t going to work well for every situation, so it’s far better to understand the reasons behind writing advice or grammar rules than to just assume that something must or can’t work.

For example, a common piece of advice—especially for new fiction writers—is that they shouldn’t get stuck on trying to succeed with a single story. Instead, the advice says that if we get stuck (whether in drafting, editing, or querying), we should shove that story in a drawer and try again with a different story. Sometimes we might even hear specifics, such as “any story that needs more than 5 editing passes should be abandoned.”

Rather, most advice has a kernel of good intentions inside. If we can identify that kernel, we’ll know when we can ignore the aspects that don’t work for us. *smile*

So let’s take a look at the above advice: Is it better to give up on a story that’s not working and start fresh? Or can we revise our way to success?

The Answer to Most Advice Questions: “It Depends”

Like the answer to most advice questions, our answer here is “it depends.” As I’ve said before, there are (at least) two different styles of advice or encouragement in the writing world:

Both types of advice can be useful and helpful to people. Neither are wrong. And the kind of advice we need might change from hour to hour or project to project.

“Move on to a new story if you get stuck” is closer to a pushy style than a sympathetic style. But the issue really comes down to why we’ve been focusing on a single story for however long.

Why Does the Advice Exist?

If we can understand why a piece of advice exists, we’ll be one step closer to discovering the kernel of truth inside it. In the case of this “start fresh” advice, the advice is common because some writers—especially new writers—struggle to recognize:

An author who doesn’t recognize the depths of a story’s problems might think its lack of success is due to needing “one more editing pass” for stronger verbs or a punchier voice when the issues are at the deeper character or story level. Or they might know it’s broken yet not know how to fix it, so they attempt to “polish a turd.” Or they might try to force a broken story forward during drafting rather than backtracking to address the issue.

With that insight, we can more easily understand why others might give us the advice to set our troubled story aside and try again with a different story. Now that we know the advice’s intentions, we can see the root of the problem it’s trying to fix, and that leads us to the kernel of truth.

What’s the Nugget of Truth Inside the Advice?

Most well-known advice—whether about adverbs or writing every day—became common because it does contain a kernel of truth. Many (but not all) adverbs are signs of weak writing, waiting for inspiration won’t help us reach most publishing goals, etc.

In the case of starting over with a new story rather than working through a current one, the nugget of truth is this: Every story will help us learn and grow, so if we’re stuck in our learning curve, moving on to a new story will often help.

Why do people give the advice to start fresh when we're stuck on a story? Should we listen? Click To TweetBut there’s another side to that truth: We can get into the habit of giving up on a story too early or when things get hard. I’ve met far more writers who leave a string of abandoned half-stories behind them than I’ve met writers who have become so fixated on a single story that they don’t grow.

How Does the Knowing the Truth Behind the Advice Help?

Given that nugget, it’s easier to see when we might want to ignore the usual advice about giving up and starting fresh:

Case Study: Both Perspectives Have a Point

I’ve never spouted the “draft and revise only a handful of times” perspective. That’s a good thing because I broke that “rule” myself. *smile*

I used my first original fiction story to learn almost everything on—probably to the tune of triple-digit editing passes. No joke. But I was still learning that whole time, so it’s not like I was wasting time or stuck in an endless loop.

Like most advice, the tip to “start on a new story if you're stuck” can be both good and bad. How can we know what to do? Click To TweetWould it have been better to leave a half-dozen broken stories in my wake while I was learning the basics? I don’t think so. Now I just have one story to go back to and fix later when I feel up for the challenge rather than six different stories.

That said, I haven’t published that story yet because I did have to move on to a different story to discover my voice. Setting aside my first story attempt to try something else gave me new opportunities to develop characters, worldbuild, and learn more about my writing process.

In other words, both sides were true for me:

Either way, we should ignore any advice that puts limits on how much we’re “supposed to” struggle with each book. It doesn’t matter if a story takes one revision or 30 or more passes to get it how we want it, as long as the final result works.

Instead of judging our success or failure by how much we struggle, focus on our progress or growth. If we’re still learning and growing, a struggle isn’t a bad thing or a sign of failure.

To bring it back to our specific “revise or start fresh” question, are we still moving forward in some way with our troublesome story? If so—if we’re still getting value out of that struggle—maybe we shouldn’t be too quick to give up. *smile*

Have you ever heard the advice to set aside a story if you struggle with it? Do you think that advice is good, bad, or it depends? Do you think struggling with a story is a sign of failure or that it’s too broken? Or do you see value in learning and growing with a tricky story? Can you think of other advice that needs similar nuance?

This is the exact question I’ve been asking myself for a while now. I know the story isn’t working. I think I know why, but I have no clue how to fix it.

I’m having trouble uniting my plot ideas with the right emotional wound(s) for my lead characters. While I’m not walking away from this project, I am going back to the drawing board to see if I need to break a character into several characters, each with stories to be told (separately). Or maybe the novel I’ve been writing isn’t the starting point and I need to back up….

Despite the frustration with my lack of (apparent) progress, I know I’m on the cusp of something clicking into place. I can’t wait to see if it’ll be a click for just this project or a new level of comprehension for putting the right pieces together.

Thank you for answering the question I didn’t know to ask!

Thanks, Jami, you covered a sticky subject from all sides. I confess I usually stick with one story for a long time, but have revised it so completely, only the characters and setting remain the same. You polish certain skills when you start something new: plotting, characterization, world-building and so on. It gives us confidence to know we CAN have other ideas. However, I find applying the advice from different gurus to an existing plot and set of characters a better growth experience. You may well still end up with an unsellable book, but you’ve learned a lot.

If the question is “How much do I hate one-size-fits-all writing advice?” then the answer is, “With a fiery passion!” I’m so glad you pointed out how different methods work for different writers. The creative process is mysterious and everyone’s creative process is as unique as their fingerprint. Thanks for always offering advice that realizes the importance of finding your own path instead of taking someone else’s method/process as gospel truth.

I eventually had to walk away from the first fantasy-romance I ever started. I started it in 2008, right after grad school, when I was still trying to figure out what I wanted to write. All these years later, I’m finally ready to return to that story. I feel in so many ways it contains hints of who I am as a writer, but there’s a lot that was trying to hard to be edgy/trendy and not true to who I am. It took me a while to find that out about myself. Now I can go back to that story and give the characters the story and journey they deserve! But it took moving on to something else (okay, many something elses) for me to realize what that story truly needed.