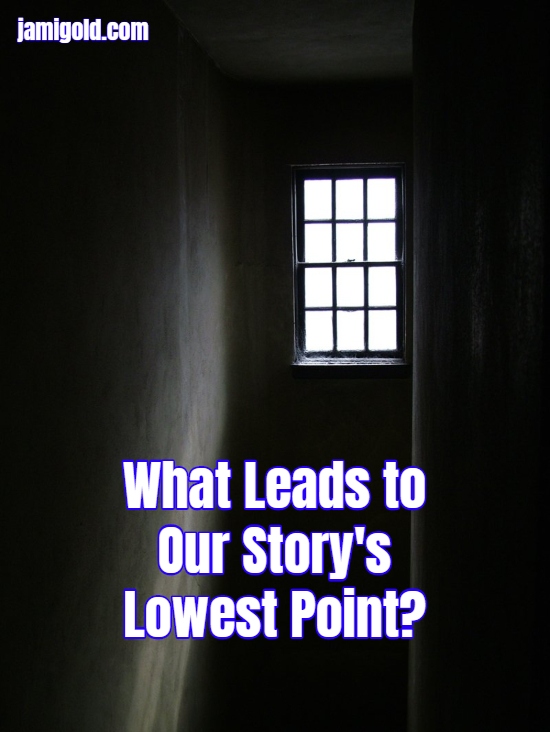 After 10 years of blogging twice a week, I recently gave myself the gift of an irregular schedule, but I still intended on sharing articles most weeks. So what gives with the last few weeks of silent treatment here?

I had several guest posters lined up after my last normally scheduled post to allow me to take some time off…and then I (and my family) got sick. *sigh*

The nurse who tested us for COVID was certain our results would come back positive, as between us, we had all but one of the dozen or so symptoms from their checklist, and she couldn’t think of anything else that would cause that gamut of symptoms. Our tests came back negative, however, so who knows what that means. *shrug* Regardless, we were still sick and having no fun.

In fact, I’m still recovering, weeks later now. But blog reader Anna had an interesting question about our story’s emotional low point, and I figured I could answer with a post.

Anna asked if our story’s Black Moment needs to be caused by an external force—such as someone betraying our character—or if our protagonist could cause it themselves:

“Could it be that a loved one learns about something from our hero’s past and walks away from him? And then he loses hope and collapses? … Can he himself lead to this dark moment? Will he hide the past, his beloved will abandon him, then he will completely break down?”

Anna’s right to dig into our many options for our story’s lowest emotional point, often called the Black Moment. So let’s see if we can better understand the role a Black Moment plays in our story, how it connects to our protagonist’s arc, and what might cause it.

What Is a Black Moment?

If you’ve seen or used beat sheets before, you’ve probably noticed a beat that is often called the Black Moment (also called the Second (or Third) Plot Point, Crisis, or “All Is Lost” point, depending on the story structure system). Our story’s Black Moment is typically when characters lose hope for succeeding with their goals.

As I’ve explained before, a Black Moment triggers the protagonist to lose hope, but what that looks like can be very different depending on the style of our turning point. They might lose hope of survival or succeeding with their plans, lose hope in others, or they might simply lose hope in potential—potential of a relationship, success, teaching humanity to be better, etc.

In some stories, our protagonist will symbolically “die,” and in other stories without catastrophic Black Moments, the effect might be more subtle. Essentially, we need an event that forces the protagonist to leave some aspect of their old life behind, kicking off the change necessary for the story ending.

Whatever happens, our characters feel failure, defeat, or otherwise think their efforts so far have been a waste of time. The stakes that have been carrying them through the rest of the story aren’t enough to force them through this setback. They give up.

What Causes Our Black Moment?

Many of Anna’s questions revolve around the issue of whether the cause of our story’s lowest emotional point must be external, or if it could also be internal or self-caused.

In other words, can our protagonist cause the lowest emotional point themselves? If we think about what makes a Black Moment worse than other setbacks or obstacles, the answer might be clearer.

A Black Moment’s Purpose in a Story

However, the bigger sense of failure that comes with an “All Is Lost” turning point (often resulting in the protagonist completely giving up) can set up an even bigger contrast. In turn, that contrast between the lowest of the lows with the Black Moment and the highest of the highs upon eventually achieving the goal makes the successful ending feel that much more victorious.

With positive-arc stories, if our protagonist doesn’t need to grow throughout the story, our story might not exist. After all, if our character is already as strong as they need to be at the beginning of the story, they’d handle the obstacles right then and there.

As is often the case, however, our protagonist starts our story being unable—or unwilling—to do what needs to be done to succeed. They might doubt themselves, harbor false beliefs, succumb to fears, or otherwise self-sabotage their efforts to reach the story’s goals. In fact, they often completely give up at this lowest emotional point despite the consequences of failure.

But then if we’ve done our job right, they rally and join the fight again. Any success after that low point shows how they’ve grown, as they’re now able (and willing) to do more than they could at the beginning of the story.

At the same time, an “All Is Lost” turning point gives our protagonist a bigger obstacle to overcome. Not only do they have to overcome whatever failure caused the Black Moment, but they also have to overcome their own sense of hopelessness. In fact, overcoming the story’s lowest emotional point and their sense of failure often leads to a leap of faith during their rally and push through the Climax beat.

After overcoming all the external and internal setbacks of the story’s lowest point, protagonists have done more to earn their happy ending. In short, they seem more heroic to readers.

As the second “purpose” insight above makes clear, Black Moments can be connected to our character’s internal arc. In many (most?) stories with an internal arc, our protagonist is often their own worst enemy at the story’s beginning because that’s simply the nature of a character arc: They need to change and improve.

It’s the choices they’ve made and the actions they’ve taken so far (before the story even starts) that prevent them from reaching their internal goals, longings, or needs.

Depending on our story, our character might embrace the need to change early (potentially by the first plot point), the middle (at the Midpoint), or late (after the Black Moment). That embrace of change can happen in phases or a one-step-forward-two-steps-back motion as well.

Often the Black Moment can be the point when a character thinks they’ve hit a dead end in their arc and growth. They’ve seen hints throughout the story of how they could change, but something now makes them think it wouldn’t—couldn’t—work.

Then, when a character overcomes the setback of the Black Moment, they also once again see the potential of their success. They see the path of change they can take to get from their point A to point Z. Their growth becomes manifest in their choices to make different decisions.

Going back to Anna’s question about whether a character could cause their own Black Moment… Hopefully with all that understanding above, it’s easier to comprehend how the trigger for a story’s emotional low point could be anything: external, internal, doesn’t matter.

What makes an event a Black Moment turning point isn’t about the source or reason for the beat, but about the results: The character loses hope and must dig deep to overcome the sense of failure or hopelessness. In turn, that “digging deep” helps our character grow (at least in a positive-arc story).

Given how a character is often their own worst enemy in their growth arc, the Black Moment could absolutely be caused by a character making self-sabotaging or self-destructive choices. Or they might be suddenly feeling the backlash from earlier bad choices.

Whatever the trigger—external or internal—the point is how the character reacts by losing hope. So Anna’s example of a protagonist’s own mistakes leading to someone else feeling betrayed and abandoning them, and then in turn, them giving up in despair, works perfectly. *smile*

Hope you all recover quickly from whatever it is!

Jami,
Hope you and the family regain your vitality soon. Plenty of Vitamin C laced with alcohol is a known cure for … Kidding. Hope you get well soon.
This blog couldn’t have come at a better time. I use the beat sheet and am nearing the black moment with my character. These insights will strengthen what I have been developing.
Thanks for the post.

LOL! Thanks for the good wishes and the laugh, Larry! 🙂

Top Picks Thursday! For Writers and Readers 09-10-2020 | The Author Chronicles

[…] saves the tale, Katharine Grubb shares 7 ways to develop romance in your story, Jami Gold goes over the options for the black moment in your story, an Donald Maass wrestles with what—and how much—belongs in your […]

Thanks for explaining this so well, just solved an editing problem for the chapter on my Protagonist’s black moment that I could not untangle