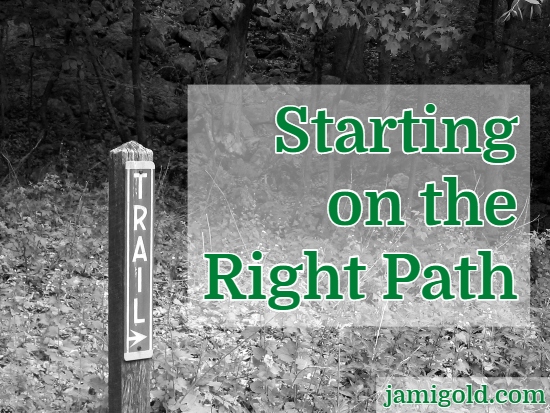 Many of us start with great ideas for our story, so we begin our draft in an energetic scramble to get our ideas down on the page. But how do we get from those opening pages to the rest of our story?

Let’s take a look at Inciting Incidents, First Plot Points, and how we can use them to help our story. *smile*

The Basics: What Are Beats?

Before we dig in, I’m going to start with a few quick definitions. If you know all this already, skip to the next section…

Beats are simply plot events or character moments like choices, dilemmas, and questions that drive a story forward. Every story has events that direct the story toward its eventual end, so every story has beats.

Some plot events change a story’s direction more than others. We even call them “turning points”—because the story turns to focus on a new conflict, obstacle, stake, or goal.

The Names of Beats Don’t Matter

If we’ve heard of beats before, we may have been confused by all the names. Is a “Save the Cat”-style Catalyst the same thing as an Inciting Incident? (Answer: Essentially, yes.) Is a Larry Brooks “Story Engineering”-style First Plot Point the same thing as the Plot Whisperer’s End of the Beginning? (Answer: Yes again.)

How do I know those answers? If we strip away the different names, we discover that every story structure system includes beats that serve essentially the same function.

If we know the functions beats fulfill in a story, we’ll always know how to translate our story’s events to where they belong in our story, especially for the beats that change the story’s direction the most.

For example, if we look at the function of the End of the Beginning beat on my Basic Beat Sheet (and know that it happens around the 25% mark in our story), we see that other story structure systems use the term First Plot Point for a beat with a similar percentage mark and function. Use whatever terms make sense for you.

Act One: Our Story’s Set Up

The purpose of Act One is to make readers care enough to become engrossed in our story (and keep reading). To make them care, they need to understand who our characters are, know their situation, and the problem(s) facing them (or what’s missing from their life).

But that doesn’t mean we fill the first 20-25% of our manuscript with a bunch of introductory info dump stuff about our character. *smile* Instead, we kick off elements of the story’s conflicts and let readers learn about the character and their situation along the way.

I’ve written several posts that dig into different sections of our story and discussed what that beat or act should include:

But all those beats fall in the middle and end of our story. Now let’s dig into the beats that fit into the beginning act of our story: the Inciting Incident and the First Plot Point/End of the Beginning

Inciting Incidents are often hard to define because they can vary so much from story to story. However, I’ll also caution not to overthink this point, as unlike the next beat, the Inciting Incident is a minor beat, so it’s a less important ingredient in creating a strong story structure.

Essentially though, an Inciting Incident is an event that disrupts the status quo and starts the story’s momentum. Think of the Inciting Incident as being the first step on the path toward the fork in the road our protagonist will have to face with the point-of-no-return choice in the next beat.

The Inciting Incident might be an “invitation” to a different situation faced in the next beat, a hook or twist that starts setting up the next beat, or even a bridging conflict that eventually leads to the next beat. Unlike the next beat, this one doesn’t need to define goals, stakes, or obstacles.

On the beat sheets I’ve created, I give the Inciting Incident a broad page/word count range that it can “acceptably” fall into. That’s because (if it exists) it just needs to happen sometime before the next beat: the First Plot Point/End of the Beginning.

First Plot Point/End of the Beginning:

The First Plot Point is a major story beat, so it’s more important to get this aspect of our story’s structure “right.” (Remember, however, that we don’t need to get it perfect during drafting, and we might not know all the details to include until our manuscript is complete and ready for editing.)

This beat falls around the 25% mark of our story (where it can balance the needs of introducing the story along with strong pacing, without shortchanging either) and marks the end of the set up of Act One and the beginning of our story’s “core” in Act Two. In other words, this beat needs to be strong enough to launch the rest of the story.

We do this by having characters make a “point of no return” choice, which thrusts them out of their “normal world” and fully into the “story world.” Their knowledge of the story problem and commitment to the story goal means they can’t return to their previous status quo.

In some stories, this threshold to the story world is obvious (think of Narnia-type stories), but it can also refer to just a new situation, such as deciding to take on a mystery case or accepting a new job. Also note that in some stories, a reluctant protagonist might not truly commit until later in the story (often at the Midpoint beat), but as long as they’re dragged into the situation and can’t back out (no return), the function here is the same.

Why Do We Need to Understand the Difference Between These Beats?

As I mentioned above, the Inciting Incident doesn’t have a lot of requirements for what it needs to do other than get the reader to keep reading. If one exists at all, it just offers a change to the status quo and starts the story on the path to the First Plot Point.

What Does the First Plot Point Need to Include?

To create a strong story for readers, the First Plot Point beat needs to establish:

Obviously, many of those elements will evolve throughout the story. For example:

But by the 25% mark at the First Plot Point beat, readers should have an idea (or at least see hints of the potential) for most elements of the story.

What Happens If We Don’t Include Those Elements?

If we’ve ever read a book that didn’t have a satisfying ending (or if we’ve received feedback about an unsatisfying ending in our story), we could probably go back to this plot point and see that reader expectations weren’t set up properly.

For example, the First Plot Point of the original Star Wars didn’t create the expectation to defeat the Empire. Rather, by the 25% mark, the story goal alluded to was delivering the Death Star plans to Alderaan in hopes of finding a weakness. That ultimate goal—finding a weakness to attack the Death Star—was fulfilled.

Whatever hints or goals or longings are established here create reader expectations about the journey they’re going to read. A well-developed First Plot Point will set up and match the story, plot, and character/emotional arcs of the story.

Need an example to see how these differences play out in our stories? Let’s stick with the original Star Wars…

The story needs something to shake up Luke’s status quo to get him thinking of possibilities and set him on the path toward change, but this event isn’t a point-of-no-return commitment either. Until his aunt and uncle are murdered, he still has every intention to return home to his status quo.

Note that the Opening Image/Hook—Darth Vader’s attack on Leia’s ship—grabs readers’ attention like an opening scene should, but it doesn’t place Luke on the path of the story. Without his involvement in the plot, there’s no story, so that event is not the Inciting Incident.

First Plot Point/End of the Beginning:

After the murder of his aunt and uncle, Luke decides to join Obi Wan in his mission to deliver the Death Star plans, with hopes of finding a weakness in its defenses.

Obviously, establishing a story-sized goal, stakes, conflicts, and commitment to the story goal are important for creating the sense that there is a story. Without those, readers wouldn’t see the potential of the story arc, as Obi Wan’s earlier mention of Jedis is interesting but doesn’t present a problem to solve.

With the elements of the First Plot Point beat, readers know how to define what a satisfying ending for the story would look like. As mentioned above, the story goal isn’t about defeating Darth Vader specifically or the Empire as a whole—but about undermining their biggest weapon, the Death Star, and that’s fulfilled by the end of the story.

While some writers plot their stories in advance, others write by the seat of their pants. *raises hand* For pantsers especially, we might not know all the plot points of our story until we finish. Or we might not know where the 25% mark will land for our story’s length until we’re done drafting.

Can understanding the difference between an Inciting Incident and our story's First Plot Point help our storytelling? Click To TweetThat’s okay. All these details and “must includes” are things we can fix in revision.

For my last story, it was only after I’d finished drafting—and knew what the heroine’s arc was—that I could ensure references to her false belief were laid out for the First Plot Point. During editing, we can make sure we’ve clued readers in on the stakes, given hints of the conflicts, etc.

We might even decide that our Act One is too long and realize that what we planned for our Inciting Incident falls at the 25% mark, where our First Plot Point should be.

If our story’s event fulfills the beat’s function, the event itself doesn’t matter. Knowing what makes a First Plot Point strong can help make our whole story stronger. *smile*

Have you heard the term Inciting Incident before? Did you know how it differed from the First Plot Point (or the Opening Image/Hook)? Does the explanation of the differences make sense? Can you think of any other differences, or how else we could improve our story with these beats? Do you have any questions about these beats?

Thanks Jami! I am afraid you lost me with the Star Wars simile. However, generally useful.
We can do well to remember that a story often starts with someone new to town (job, class, whatever) but the plot does not develop until the character learns of the problem they face, or the change they need to make, either to themselves or to the town.