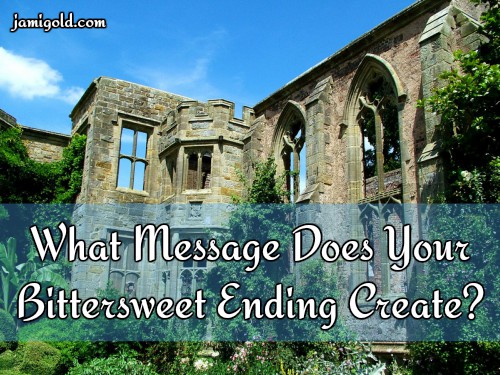 Last week, my latest Resident Writing Coach post at Writers Helping Writers brought up the potential for allowing unintended themes to appear in our story. Every cause-and-effect aspect of our story can create the possibility of our characters experiencing success or failure for the “wrong” subtextual reason, theme-wise.

For example, we might want to create a theme about our character’s internal strength leading to survival. But if our character’s survival seems to come more from luck than from their heroic acts, we’re undermining our intended theme.

Those types of accidental messages are very easy to include in our story. They’re also tricky to root out and fix, as we might not recognize the subtextual impression we’ve given readers.

Will the lack of a neat-and-tidy ending undercut our story’s attempts to include success-related themes? Let’s take a look…

Ask Jami: What If Our Story…?

On my guest post at WHW, Marina Costa brought up the issue of bittersweet endings:

“In a historical fiction: some villains can’t be really punished, because they are historical figures (who had done enough bad things, both documented and undocumented, but they were too powerful, think Western town lords, and they died in their beds, of old age, untroubled by anyone for what they have done). Of course, their fictional sidekicks got their comeuppance… Hopefully it doesn’t give the wrong message/ theme… It’s just historically true, that you can fight and overcome some villains, others can’t be overcome…”

That’s a great question, and I’m so glad Marina asked about this situation. There are lots of reasons why our ending might include bittersweet elements.

For just a few examples…:

Any one of those (or other) situations can leave a bittersweet tinge on readers’ impressions. And that writing choice could create unintended themes or undermine the theme we want.

The Risk of Bittersweet Endings

Endings where some aspects don’t fall in line often feel more realistic than endings where every thread is neatly wrapped up in a bow. In the real world, we can’t control everything, so stories without a bittersweet hint can feel more fairytale-ish.

If our story has a bittersweet ending, how can we create positive themes? Click To TweetThat said, if we want readers to come away from the story with a sense of success and/or messages related to success, we have to ensure the bittersweet aspects don’t undermine our intentions.

In Marina’s question, she brings up the idea that “some villains can’t be overcome.” Obviously, that’s a risky impression that can make what our characters accomplish seem meaningless.

We might create an unintentional theme of “nothing we do matters.” And that doesn’t lead to a happy ending or a sense of success. At all.

(Note that there’s nothing wrong with that “nothing we do matters” theme if that’s what we intend. The problem is when that impression undermines our intended happy and/or successful ending/themes.)

How Can We Avoid Problems with Bittersweet Endings?

Depending on the depth of the problem, we have two main options for ensuring the theme we want is the impression readers take away.

The Narrow Approach: Broadening the Definition of Success

If the problem is just with a single event in our story—such as an impression that a villain doesn’t get their comeuppance—we can try to tweak what readers expect. For example, in Marina’s case, she could try to expand what readers consider “punishment,” so the villain is still “overcome” in some way.

My reply to her shared alternate ways to overcome the villain:

Each of those cases would create a sense that the villain has less power, so they couldn’t continue being as bad as before. Taking away their power is a type of overcoming them, even if they still “got away” with bad behavior.

Similarly, we can tweak what success looks like for the other situations mentioned above (the heroes delayed the Big Bad Villain’s plans for the series, redemption solved the story problem better than vengeance could, the heroes gained deeper insights, etc). Whatever the situation, we can emphasize that progress was made, the bad guys lost power, the good guys have a plan to overcome in the future, etc.

The point is to make sure the characters believe (and thus readers believe) that the situation is better than before. The solution might not be permanent, but the sense that there were consequences for the villain’s actions or improvements for the story’s problem will make the story events feel like they mattered, which helps create positive themes.

As a freelance editor, one issue I’ve seen when editing a series is a sense of an individual story being unfinished. For example, readers might expect the story to end when Z happens, but the author has written the series so Z doesn’t happen until three books down the line, leaving readers disappointed and unsatisfied with this book.

My suggestion for how to fix that problem is the same thing we’d do for this situation of ensuring our bittersweet ending still feels like a success: Check our story’s structure for the right goal.

Let’s dig into what that means…

How Do We Check Our Story’s Structure?

Story structure—at the most basic level—is how a story is put together. Specifically, two points in our story’s structure are important for developing our story’s goals.

Near the 25% mark, after all the Act One introductions are complete, the main conflict starts with a major event:

After this plot event, readers should have at least a hint of (and in many cases, a fairly good idea of):

Near the 50% mark, a major event deepens the goals, conflicts, obstacles, and/or stakes for the protagonist:

At this point in the story, the character (and readers) should have a better idea of what they want and what’s standing in their way. If a character’s goal by the end of the story will be different from what was established at the 25% mark (due to character growth, etc.), that change should be hinted at here.

Whatever goals, conflicts, and stakes are established here give final form to reader expectations.

For example, the First Plot Point of the original Star Wars didn’t create the expectation to defeat the Empire. Rather, by the 25% mark, the story goal alluded to was delivering the Death Star plans to Alderaan in hopes of finding a weakness.

That ultimate goal—finding a weakness to attack the Death Star—was fulfilled. Even though the Empire still existed, the audience was satisfied with the story of the first movie because the story goal was properly established.

Similarly, in half my Mythos Legacy novels, the villain could theoretically reappear to cause trouble in future books, so I set up the story problem and goal to be something that is resolved by the end—not that the villain is killed but that X injustice is stopped. A goal to fix “something” can often more easily create a happy ending than a goal to find a permanent solution.

So if we’re worried about creating an unsatisfying ending or an unintended theme—especially if we can’t tweak the ending—we can check the major turning point plot events at the 25% and 50% marks to verify that reader expectations were set up properly.

As I’ve pointed out before, if our characters aren’t worried, readers won’t be (unless readers feel dread because they know more than the characters). The same goes for many other emotions—whatever our characters feel, readers are likely to feel similarly.

The easiest way to emphasize the theme or impressions we want is to put them into the hands of our characters. Do we want readers to come away with the sense that our characters “overcame” the villain? Show the characters celebrating that fact.

We don’t have to go so far as Star Wars‘s award ceremony for that celebration. But characters can think or say things like “They won’t be able to do that again” or “We’ll be ready if they try that again.”

As long as our story’s goal wasn’t to kill the villain or solve every problem, if readers believe our characters’ statements, they’ll come away with the same sense of success. With that positive impression, we’ll ensure that our story’s success-related themes come across as we’ve intended. *smile*

Have you read stories with unsatisfying endings? What made it unsatisfying? Did it fail to properly set up expectations? Do any of your stories have bittersweet endings? Does this information help, or do you still have questions?

[…] For those puzzled by the elements of writing, Janice Hardy illuminates the difference between idea, premise, plot, and story, and Jami Gold explores how to create positive themes despite bittersweet endings. […]

Great discussion of ending themes. Some readers have been indoctrinated with the sacrifice idea or necessary death – of a mentor so the character has to go alone to the ending, say. While I agree the character should have grown enough to take the challenge in hand, I don’t like killing off good characters without need so I like to tidy the secondary character themes in the ending too. This deepens the book from a simple plot narrative to showing how the outcome affects various people.

Great example and point! Yes, our secondary characters and subplots can contribute to our themes as well–and they don’t need to be all about loss or sacrifice. 😉 Thanks for pointing that out!

[…] broad strokes. Kristen Lamb tells us how genre helps you write a successful story, Jami Gold shows how to create a positive theme in spite of bittersweet endings, and September C. Fawkes lists the 5 most common mistakes with […]