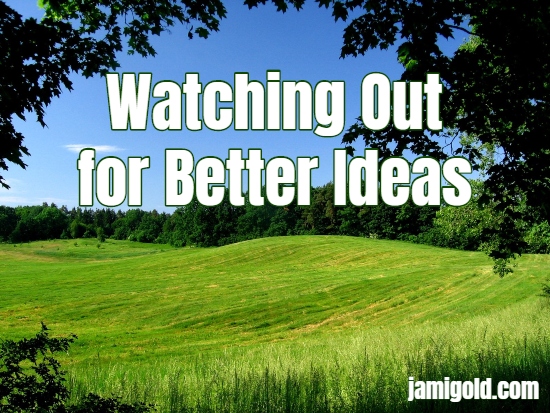 Hang around writers long enough, and we’re bound to hear grumblings from the plotter vs. pantser divide. (Pantsers are those who write by the seat of their pants.) In the endless debate, some claim there’s a “right” way and a “wrong” way to draft our story.

Some act like plotters are the only “professional” way to write…even though plenty of famous authors don’t plot their stories in advance. Others act like pantsers are the only writers who let their characters be true to themselves rather than puppets acting as the author needs for the plot.

In truth—as we talked about last month—most of us fall somewhere in between plotters and pantsers on the story-planning spectrum. No matter where we fall, we can learn insights and techniques from other approaches to drafting, especially as we might need to try something different with a future story idea.

Last week, I came across an interesting post about how detailed is too detailed when it comes to planning our story. Let’s dig into this idea and see what we can learn about leaving our options open as we draft our story.

How Much Do We Need to Know Our Ending?

I’ve often joked that as a pantser, my understanding of the ending of my story is really vague. I write romance, where a “happily ever after” is a requirement of the genre, so I know I’ll have a happy ending for my couple. Ta-da! *grin*

How much should we plan our story? Do we need to know the ending? Click To TweetThose who like more details might cringe at my lack of details, but if we think about it, the popular TV series with big arcs often didn’t have their details nailed down in advance either. Of course, according to many fans (or former fans) some of those series did a better job of wrapping up all the story threads than others.

While I know personally that pantsers can write a story without much of an idea for an ending, the process gets trickier if our story is complex or will carry over from one book to the next. Pantsing a series can require an expert-level of pantsing skill.

Pantsing a Series vs. a TV Show

I’ve talked about before the difficulties of pantsing a series, especially when it comes to worldbuilding. In that post, I mentioned how the three styles of pantsing might affect our ability to pants a series.

In our case, only a single author is responsible for knitting all the pieces of our story together (usually). However, in a TV series, different screenwriters might be involved for every episode or season.

That obviously adds a layer of difficulty to creating a coherent story arc over the course of the show. Yet some shows manage to make it work, which should give us some hope for our own abilities—or at least give us some ideas that might help us with our story planning. *smile*

Where’s the “Sweet Spot” in Planning a TV Series?

In a TV series, the creator or showrunner attempts to control the overall sense of the story. Emily Todd VanDerWerff’s article about Game of Thrones shares insights we might be able to apply to avoid the risks of a too-detailed or a too-vague plan for our ending.

The Risks of Too Many Details

Emily points out that Breaking Bad‘s creator found the extensively plotted season two extremely difficult for his team to write. The risk of too many details is that we can feel just as locked in by plotting as we would if we’d pantsed ourselves into a corner.

Emily also suggests that part of the issue with the Game of Thrones final season is that the storytelling aspect of character relationships was forgotten in favor of the plot:

“The big turn toward genocide that Daenerys takes in Game of Thrones’ penultimate episode isn’t entirely unmotivated, but it feels like it comes out of nowhere because her relationships with the other characters have barely been affected by her growing paranoia and desire for conquest. As such, it feels like she exists in a vacuum, where her actions are easier to read as simply an extension of the would-be queen she’s always been, rather than a ruler whose actions impact the people she rules, even those in her inner circle. …

The writers certainly had a plan. But to put that plan in motion, they had to twist and contort the characters so heavily that the whole show became a warped, funhouse mirror version of itself.”

Also, if all our planned details make us think there’s only one way to move the story forward, we might feel like we can’t use a better idea if one comes along later. Or we might get bored by the actual writing, seeing it more like a to-do list than a creative endeavor. Or we might slow down the storytelling because we can’t let any of the exciting stuff happen yet…according to our carefully planned plot outline.

The Risks of Too Vague a Plan

At the other end of the spectrum, a complex story or series with many moving pieces can run the risk of falling off the rails if we don’t have a plan at all. We want our ending to feel inevitable, and that’s hard to do if we don’t have any idea of where we’re going to lay the groundwork leading up to our grand finale.

What are the risks of a too-detailed or too-vague plan for our story? Click To TweetTV shows such as Lost are well known in the opinion of many for falling apart at the end. Where the Game of Thrones finale placed plot over characters, Lost placed character relationships over a coherent plot.

Without a plan, our story might not make sense, or the audience might wonder what the point of the story was. Our story’s climax needs to tie together many pieces of our story to create a satisfying ending. So we need to have enough awareness of our story’s elements to ensure we’re not dropping threads and leaving readers frustrated or confused.

How Can We Find Our Story’s Sweet Spot?

After his experience with season two, Breaking Bad‘s creator started planning more details on the fly, even including a few flash-forwards. He trusted the overall premise and idea for the show would hold the details together.

“Thus, the best endings are often ones where the writers have a very vague idea of what will probably happen and work toward that point, while also leaving themselves room to radically change everything until the last possible second. … Planning plot points and character arcs is all well and good, but it falls apart if you adhere to them so rigidly that you can’t account for how the characters’ relationships might change.”

That also means events and interactions won’t miss an opportunity to cause an effect on the story. Reactions and events won’t lack for a trigger and come out of the blue. Foreshadowing won’t be left as stray threads. And so on…

Instead, all the elements of our story will work together to form a greater whole. With an eye on the overall story, we can balance the pieces to create a satisfying story—or series!—even if we don’t know all the details yet. *smile*

What TV or book series do you think did a good job of wrapping up the overall story (and how so)? What types of problems have you seen series run into? When it comes to your story’s ending, how detailed do you plan? Have you ever run into problems from a too-detailed or too-vague plan? Does this post give you any ideas of how to find a better balance?

Often, I hope that my story couple’s arc will end like X, but I’m being constantly derailed because it’s clear that they are not going in that direction… It’s hard because they need to have a happy ending, but I can’t force them to solve their relationship problems asap, because that would be unrealistic and unconvincing.

What’s even trickier, is that there are four couples (or five, if you include some side characters), and they all have to end on some happy ending, without sounding as cheesy as a romantic comedy, since it’s not a rom com. (Don’t get me wrong. I adore rom coms, but even I think it’s unrealistic to have the trope of several friend pairs marrying at the same time at the end.)

Haha I’m completely pantsing this series and am on the fourth book. But I temporarily abandoned this book to write a new story, because I feel burned out on this series right now. XD I love this series, but I’m also really sick of it and need to take a big break.

Cassandra Clare’s The Mortal instruments and The Infernal devices series are pretty good in both character coherence and in plot power, imo. The loose ends were tied up in a satisfying way, and the story was tense and exciting to read.

You must have been peering over my shoulder at some point because this is the exact post I needed right now. I’ve been really struggling with maintaining a balance between keeping a complicated plot under control and still allowing for spontaneity. I think I need to go back and give myself a little more breathing room.

I never know how the story will end until I get there! lol While most of my writing is character-driven, I do watch that it doesn’t simply become one angsty moment after another – which is my big problem with most TV shows nowadays. The plot in my stories may be less important than characters, but that doesn’t mean it’s unimportant or flimsy. It’s much more fun moving the plot forward when you have to consider how these particular characters would act/react, than trying to force them to do things just because The Plot demands it. And that’s one major reason why I don’t get involved with planning or detailed ideas – it would be next to impossible for me to weave the many-times intricate plot together with the complex characters if I also had to follow some preconceived road map. No way!

Even without seeing this post, this is my modus operandi. There are set plot goals I have in mind, like a happy ending or the reveal of a twist, but the way I go there is pantsed. For example, a horrifying reveal was set to be shown in chapter 2, but it got booted to chapter 3 because It Makes Sense. I try to steer the story to course, but the characters wrestle control from me and make detours, but I get there… eventually… in ways I didn’t expect.