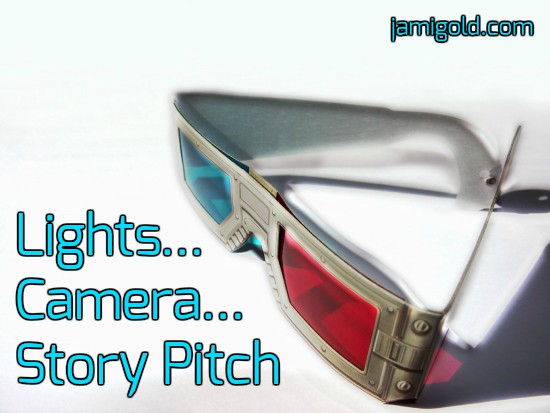 Years ago, before I decided to self-publish, I admitted several times here that I struggled with querying. Even after I made the self-publishing decision, I was still faced with the need to describe my story in an interesting way that would get readers’ attention.

Story pitches are used for self-published books as well as traditionally published books. No matter how we publish, we need to introduce our story to potential readers and interest them enough to want to look closer.

Over the years, I got better at this skill (just like we do with most skills we study and practice), but I know I wasn’t alone in my struggle. The skill of pitching our book is completely different from the skill of writing our book—they have different learning curves and require different strengths.

One aspect that always stumped me when writing queries was figuring out which elements to focus on. When condensing our thousands-of-words-long story down to a few lines or a hundred or so words, we’re obviously leaving out a lot. How do we decide what to emphasize in our pitch?

Story Elements: So Many Choices

Do we emphasize our story’s…?

Obviously, we can mix and match those elements as well, and the combination we use gives our story another way to feel unique even if aspects are formulaic. But the choices we make are important.

Back when I was querying, I thought I needed to choose elements that would create the one-and-only “right” impression. That’s not how this works, however.

Yes, we want to create a “good” impression—meaning that our pitch is interesting enough to grab readers’ attention—but just as readers’ enjoyment of stories is subjective, so too is a “good” impression. What grabs attention can change with the audience, genre expectations, current events, readers’ moods, etc.

It’s also important to describe our story accurately—meaning that our pitch doesn’t mislead readers too much. We can probably all think of some book where the back cover copy made us think it was going to be an “A” kind of story and instead it turned out to be a “Z-squared in an alternate universe” kind of story. Yet that question of accuracy isn’t a cut-and-dried issue either.

Impressions Can Be Accurate and Different

In some cases, both impressions for the “A” kind of story and the “Z-squared in an alternate universe” kind of story can be accurate. The recent Spider-Man: Far From Home trailers are an excellent example of how the elements we choose can create very different (but accurate) impressions of our story.

What kind of impression do we want to create in our story's pitch for queries or book descriptions? Click To TweetMany (if not most) audiences leaving Avengers: Infinity War last year assumed that Marvel Studios would find a way to bring back at least some of the heroes who turned to dust at the end of the movie. After all, several of those missing characters already had their next movies in the works, such as with Spider-Man and Black Panther.

However, those movies could be prequels, so their existence wasn’t a guarantee the characters would be back. Not surprisingly, Marvel Studios did everything they could to leave the answers of “what happened to those who were dusted” up in the air until revealed in Avengers: Endgame.

Both trailers are accurate(ish). But they definitely emphasized different aspects of the same story, creating two very different impressions for audiences.

The first trailer—the teaser shared before Endgame‘s release—emphasizes elements that create a light, almost fluffy feel (at least in comparison to the darkness of half the universe disappearing in Infinity War). In our written story pitches, we can use word choice and other elements to create a certain mood and style.

For this trailer, the feel and impression are created by:

Minor Spoiler Warning: In order to talk about the difference between the teaser trailer and the official trailer of Spider-Man: Far From Home, I’m going to have to reveal whether this movie takes place before or after Infinity War/Endgame.

What story pitching insights can we get from a look at the two Spider-Man: Far From Home trailers? Click To Tweet(In other words, if you haven’t seen Avengers: Endgame yet and don’t want to be spoiled about whether or not we now know if Spider-Man is still dust, skip down past the trailer video linked below. If you figure you already know that answer, I promise I’m not revealing any other Endgame details here.)

…buffer space for the spoiler averse to skip ahead…

The second trailer—the official one shared after Endgame‘s release—emphasizes elements that create a sense of trauma and loss. Taking place after Endgame, Far From Home will act as an epilogue in some ways to the events of that resolution. (The head of Marvel Studios has even said that he considers Far From Home the last movie of this phase and the Infinity stone story arc, not Endgame.)

For this trailer, the feel and impression are created by:

In other words, the new trailer doesn’t make Far From Home look like a completely different movie, but it does add several layers of depth. It’s still “fun” but now also “action-packed with serious moments.” The carefree emotions are balanced by threats, grief, worries, and false beliefs, etc.

MAJOR Spoiler Warning: The trailer spoils several details from Endgame beyond what I revealed here. If you haven’t seen Avengers: Endgame yet, you might not want to view this official Far From Home trailer.

Which Impression Is the “Right” One to Create?

Neither of the Spider-Man: Far From Home trailers are “bad” or “wrong” in the slightest. They both successfully establish the character, the setting, at least some aspects of the premise, character goals, obstacles, and at least one twist (like the appearance of Nick Fury).

They’re both good enough to entice people to see the movie. The official trailer just adds more layers and depth.

For our stories, just like with this movie, we might use different pitches or book descriptions depending on the circumstances and/or audience.

Which elements should we emphasize?

Those that create the impression we want.

That’s a vague and pat-sounding answer, but that’s really what it comes down to. We’d probably want our story pitch to give the impression that our story is unique, but will deliver what the reader wants.

What should we include to…

For each of those, we could drill further. For example: What’s going to make our character seem compelling?

In other words, there’s never going to be just one “right” answer. That’s why we might want to change our story pitch approach occasionally and test different versions.

Querying writers can tweak their query letter with each batch of submissions. Even published authors can tweak their book descriptions, perhaps as they see what elements of their story speak to readers in reviews.

We might not find a story pitch that resonates with our audience right away. Or 100 versions later. But we can keep trying.

If we struggle with this process, we can know that our skills will improve. As we learn more about the types of stories we write and what makes them unique, we’ll get better about teasing those elements out from the big picture of our story, and eventually, we might not find this process impossible at all. *smile*

Do you struggle with condensing your story down to a pitch? What types of pitches have you attempted (queries, vendor book descriptions, front cover tagline, elevator pitch, etc.)? Have you seen other movies that use very different trailers? Why do you think they made them so different? Can you think of other insights we could take away from movie trailers for our pitches?

Due to my eyestrain and inability to watch movies now, I had to accept that I will hear spoilers about Endgame, Game of Thrones, and Detective Pikachu, among other films. XD So it’s okay, I don’t mind.

But I like this example you gave, where one trailer is more on the lighter side, and the other trailer is more on the darker side. It’s true that we can emphasize different things in different blurbs (or query letters), and that neither is necessarily “right” or “wrong”. It depends on what our goals are. I’ve definitely seen cases where one blurb creates a certain vibe about a book, but an alternative blurb creates a very different vibe, and you don’t know which blurb to trust, lol!

One thing I hate, however, is when the writer includes some worrisome plot event in the blurb, but which never happens in the book!! False alarm!! In one gay romance I read, apparently there will be this new guy who gets between the established couple (almost like a love triangle). Of course I was worried for them. But when I read the book, lol, nothing of the sort happened. Plus, this new guy actually fancies another guy, who is a mutual friend of the romance couple.

I only have a WIP novel, my first one, so I don’t have a pitch ready at all. Now I’m thinking I should work on the pitch even though my novel isn’t done yet!