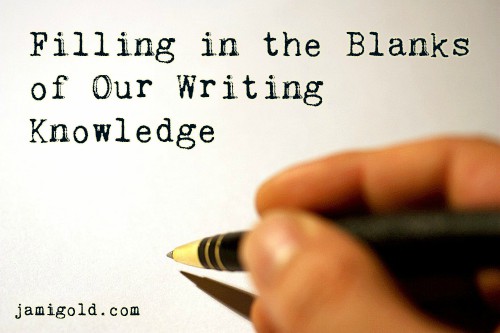 A few weeks ago, I shared my series of huge mega-posts listing every writing craft skill I could think of for story development, line editing, and copy editing.

We can use those lists to learn drafting skills, self-editing skills, and evaluating skills (for freelance editors). But before I offer them as downloadable checklists for everyone—so we can keep track of our educational progress—I want to make sure these lists are as complete as possible.

On that second bullet, I’m always looking for post ideas, so I doubly appreciate questions about any skills listed. In fact, let’s continue this series to “fill in the blanks” on our craft education:

Today, we’re filling in more blanks in our knowledge by talking about a skill addressed on both the Line Editing and Copy Editing Master Lists: What are parallel sentence constructions, how can we use parallelism to strengthen our writing, and how should we fix parallel structure problems?

(And be sure to let me know if you have questions about other skills. With your help, we can create this mega-resource together. *smile*)

Filling in the Blanks: Parallelisms

First of all, we need to define this skill: What the heck are parallel sentence constructions?

Parallel sentence constructions are sentences that use repeating/similar elements or grammatically symmetrical words/phrases/clauses.

In other words, parallel sentences strengthen our writing by:

The easiest way to understand parallelisms is to see examples. Take a look at those bullet points. See how each one starts with an *ing verb? That’s one form of parallelism.

Imagine if one of those bullet points was worded as:

Know what parallelism is? Or how to find and fix parallelism errors? Click To TweetThat to create would be clunky in the middle of all those improving, adding, varying, and avoiding words (not to mention be grammatically incorrect, given the introductory phrase). We’d create a speed bump in readers’ minds.

Like we showed above, one type of parallel structure is to ensure that when we’re listing or comparing elements, we’re using the same type of grammatical structure for words, phrases/clauses, or sentences.

In other words, we can mix different nouns (or verbs, prepositional phrases, or whatever) in the same parallel structure, but we couldn’t mix those different types of grammar elements for the same function in a sentence and still have parallelism.

When we’re creating parallel structures, we have to be consistent with whether each of our phrases have their own preposition or if they’re all sharing one.

Usually a sentence will read tighter if the parallel elements share a preposition:

However, some sentences are so convoluted that each symmetrical element needs its own preposition for readers to recognize the pattern of the parallelism:

Without that symmetrical preposition, readers might parse the parallelism as:

Similarly, parallel structures can either share a single article or include a separate article for each symmetrical element.

If the elements need different articles (the, a, an) or possessive pronoun (his, her, my, its, their), we need to give each element their own identifier. (For example: She talked to a doctor, a nurse, and her aunt.)

Some types of sentences include paired elements that sound stronger and more rhythmic when symmetrical.

With some of those paired structures, we run into grammatical issues if we misplace the first paired element, as the “shared” words won’t line up symmetrically:

When comparing or linking two elements, ensure the clauses or phrases are symmetrical.

How Can We Find and Fix Parallelism Errors?

Most parallel structures are built off certain words:

When we find those words in our writing, we can mentally convert our sentence into bullet points and check for parallel structure:

When we find errors, we need to fix one of the issues discussed above, depending on the type of parallelism:

Why Do We Need to Understand Parallelism?

In addition to avoiding grammatical errors and making our writing clearer and easier for readers to parse, parallel structure strengthens our writing in two major ways…

#1: Improve Our Writing’s Rhythm and Style

The symmetry of parallel structures is pleasing to the ear, so our writing automatically sounds more professional if our sentences are symmetrical or parallel. Parallelism also helps us use several rhetorical devices.

Each of the following techniques wouldn’t be nearly as effective (or wouldn’t work at all) if the example from that post lacked parallel structure:

Notice the consistency in each example: using all simple past tense verbs, usage of the preposition with, etc.

In addition to the repeating end/beginning words, Yoda’s saying is stronger for taking advantage of the repeating leads to element. And even the “out of sync” phrase in the last example still uses a consistent “her”-adjective-noun construction.

Some writers think all repetition is bad and try to mix up phrases or clauses, but parallelism is often preferable for readability and impact.

Compare these two sentences shared as examples at Study.com:

Even though the first sentence is grammatically correct, its prioritization of variety over parallelism means the sentence isn’t nearly as memorable or strong.

The link above also shared the following well-known literary examples:

None of those sayings would be nearly as memorable without the parallelism.

The better we understand parallel structures, the stronger we can make our writing. Sentences with clean parallel construction can feel tighter, have a stronger rhythm, and be more memorable. All of those traits encourage readers to keep turning the pages of our stories. *smile*

Can you think of any skills I’ve missed for the Master Lists? Do you have questions or need more explanation for any of the skills? Had you heard of parallelism before, or were any of these rules new to you? Do the examples here help you understand parallel sentence structures? Do you have any questions about how to find or fix parallel construction issues?

[…] craft elements is essential, as well. Jami Gold discusses parallelism, and Jennie Nash explains how to deal with the passage of […]

This problem is similar to how sometimes, I know I should use the past tense, but I really want to use the present tense. Or vice versa.

Oh my! I love your point that repeating words can be effective and memorable for famous sayings. I recently made up my own saying: “When you get desperate, you get smart.” 😀 So yeah, I don’t need to worry about being repetitive here, lol.

Oh, I struggle with that format too. I just caught myself making that dropped-article mistake this past weekend. LOL! And great example with that saying! 😀