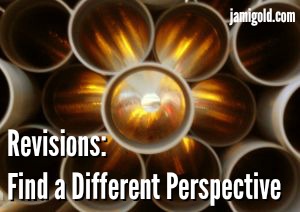 Ever feel like your life is one step forward and two steps back? While our characters run into obstacles all the time and our revision efforts can cause a domino effect of other required changes, unfortunately, that phenomena can be a real-life occurrence as well.

I was finally making progress on my physical therapy for the nerve/tendon issues in my feet and ankles, and then a few days ago, I tore the tendon in the arch of my foot. *sigh* Now, I’m back to limping and starting over. Again.

So I’m going to deal with that frustration by updating a post about editing from a few years ago that has stuck with me. Even with several more years of experience now under my belt, I still find the perspective here helpful in many situations. I hope it helps you too. *smile*

Got a Story Problem? Don’t Start Over Yet

We’ve heard of rewriting, revising, and even re-imagining, but what does “re-envisioning” mean? Several years ago, I came across the word in a great post by Juliette Wade about how to redo a scene without rewriting.

In the years since, I’ve made the same observation that Juliette described in her post: When faced with a scene with issues, many writers have the tendency to get rid of the scene and start over. And like Juliette, I’ve found that more often than not, the new scene has issues too.

When a scene isn’t working, it’s tempting to blame the scene and get rid of it. Sometimes, that’s for the best. Maybe the scene doesn’t have a point or isn’t needed for the story arc. But if the scene has a purpose in the story, we can often find a different approach.

In my experience, the reason so many writers have a tendency to start over is because plot events are tangible. It’s easier for us to think about changing the events, setting, or actions than to dig into what might really be the cause of our story’s problems.

Sometimes changing plot events will fix whatever is broken:

But the plot is not the story, so changing plot events through rewriting often isn’t the answer.

Is the Plot Really the Problem?

How can we tell? We might need feedback from beta readers, critique partners, or editors to help us identify the core of the issue.

Feedback for plot-related issues tend to…:

Notice that even for some of those examples, rewriting a scene to change plot events wouldn’t be necessary. For example, we might just be able to make tweaks to the scene transitions or strengthen the cause-and-effect flow between events.

It’s easy to get wrapped up in convoluted plot twists that feel central to the story and therefore are the first target when attempting to solve problems. But too often rewriting a scene to create a different plot event won’t help.

So If Re-Writing Isn’t the Answer…?

We will occasionally have plot tangents, logic flaws, or plot holes. However, just as many (if not more) issues in stories are related to unclear, missing, or weak:

These elements provide context for the plot events. If we start mucking about with the plot, any changes won’t help us (and will, in fact, over-complicate the story).

Instead, we have to figure out why the scene isn’t working and make adjustments.

Those might sound like they’d require big changes, maybe even starting over. But just because a scene isn’t working doesn’t mean we have to start from scratch. Sometimes a simple change in focus will transform a scene.

As Juliette says in her post linked above (bolding mine):

“You can completely change the significance of a scene—what the scene means to the rest of the story—while hardly changing anything that happens in it. All you have to do is change what the events mean to your protagonist.”

I shared this example when this post originally ran:

“A few weeks ago, I decided to change the motivation for the point-of-view character for a scene. … Instead of focusing on the character’s selfishness, I showed the character thinking he was rescuing another character.

From self-centered to rescuer? That’s not a minor change. I thought I’d have to rewrite the whole thing, and I imagined several hours worth of work ahead of me.

In the end, I changed only four sentences. Yes, really.”

Since that original post, I’ve found this to be the case time and time again. We can make huge differences to our story by changing the context, what the scene means to the character, and thus to the story and to readers.

How Small Changes Can Make a Big Difference

Everything in our story depends on reader interpretation. So when we’re changing a scene to make it work better, we’re really trying to influence a reader’s impression.

Changing a character's internalization changes a reader's impression of a scene. Click To TweetAs readers, we can sometimes point to a single sentence to explain why we don’t like a character. Maybe the character’s motivation made them seem stupid. Maybe their justification for a questionable action seems weak. Maybe they thought something too mean. The point is that we know—as readers—how much a single sentence can make a difference.

Now notice how the examples above are all things showing how a character feels about and reacts to a situation. We use internalization (internal narrative or internal monologue) to reveal a character’s assumptions, rationalizations, and reasons for acting a certain way. Changing a character’s internalization changes a reader’s impression of a scene.

Juliette’s post also gives several fantastic examples to explain this point. Here are her first two examples, where we can see how readers would come away with opposite impressions with just four sentences following this lead-in:

Shannon put her hands on her hips and said, “God, Dana! ‘Active engagement in the message’—that’s awesome, you should totally major in English.”

Version 1:
“Yeah, maybe,” I said, all daring. “I love to write.” For a second I thought that was it, I’d done it, my year with her was made.
And then Brian walked in the door.
Summary: Dana tries to be brave enough to accept Shannon and Brian wrecks the moment.

Version 2:
I was speechless. Without even thinking, she just tore my secret hopes out of the safety of my heart and turned them into some stranger’s ultimatum! How could she?
Before I could think of anything to say, Brian walked in the open door.
Summary: Dana resents Shannon’s nosiness and is rescued by Brian.

So when a scene isn’t working, look first to the internalization sentences. Think of tweaking the character’s emotions, strengthening their reactions, clarifying their motivations, revealing their vulnerability, hinting at their fears, etc.

'Sell' our characters' goals, motivations, and stakes with strong internalizations. Click To TweetWe can ask our critique partners and beta readers for their impression of the characters based on those sentences. Changing the character’s assumptions, rationalizations, or reasons for their actions might strengthen the scene and fix the issues.

Internalization is where we can “sell” readers on our characters’ goals, motivations, and stakes. If we’re convincing, the whole story will hang together better. Also, the clearer we’re able to make those elements, any subtext and themes will emerge with stronger ties to add up to a more coherent “feel” for our story.

Rather than thinking we have to start over or come up with different plot events, we might just have to do a better job of “selling” how our characters make choices, react, and reveal emotions in response to those events. Easier revisions and a better story? Bonus. *smile*

Have you ever started from scratch on a scene? What was wrong with it and what needed to be fixed? Did starting over help? Have you tried this technique before and did it work for you? Have you caught yourself being influenced by a sentence or two as a reader?

“Rather than thinking we have to start over or come up with different plot events, we might just have to do a better job of “selling” how our characters make choices, react, and reveal emotions in response to those events. Easier revisions and a better story?”

Well, this is interesting. I never really thought of that, so I am going to try it on a short “situation” I am working on for my next critique posse meeting. Very kewl.

Yes, yes, yes!
I recently got content edits for a novella from my publisher and I wanted to curl up in a ball and cry. There were more holes in this story than a week-old target at the shooting range.
But when I actually sat down to work on them…I found that by tweaking a few internalizations and external reactions, I could sew them shut without too much pain, agony and rewriting.
I wish I had read this post before I opened that document and nearly quit writing. This is brilliant and spot-on in my recent experience.
Thanks for being such a genius…again 🙂

Ooh I like the tip on altering their internal monologue to show a character’s motivation, goal, emotion, stakes, etc.

Gosh I have so many sentences that I want to delete because they make some of my characters look like awful people lol. So yes, mere sentences can create a whole different impression.

Thanks, if we leave out internalised information we may risk the reader misinterpreting an action or taking a completely different view of a character. On the other hand, avoid head-hopping.

Thanks! Very helpful — I won’t toss the scene just yet.

[…] editing, there are issues large and small to deal with. Jami Gold discusses re-envisioning: how to fix big problems with small changes; Kris Spisak demystifies often-confused words starting with A, and Lee Lofland gives us a handy […]

[…] Luckily in our stories, we can fix the problems we find. And luckily, we’ll often discover that big problems are caused by small—and relatively easy-to-fix—issues. Sometimes just a line or two might be enough to fix missing or broken goals, stakes, or motivations. […]

6 Steps to Balance Your Editing: Plot vs. Characters – Paranormal Author

[…] a big overhaul to fix (which might be another reason we default to plot changes), but in reality, major issues might need just a line or two to change the context. Context is all about controlling a reader’s impression by changing what the plot means to […]

[…] the importance of character motivation and an example how how they can play into plot twists. Little changes to internalizations and motivations can make huge differences in the big picture of our […]

What Advice Do You Ignore? | Jami Gold, Paranormal Author

[…] Also like Dean, I go back and make changes as I discover more about where my story’s going, rather than waiting to make structural changes after I finish. Sometimes these changes will mean reworking a scene, but other times small changes can fix big problems. […]

[…] understand how tweaking motivations can solve many plot/story issues […]

[…] understand how tweaking motivations can solve many issues […]