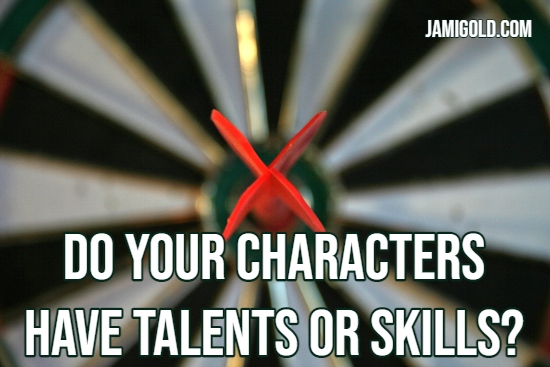 Often, however, writers tend to consider figuring out whether their characters have any talents or skills as secondary—if they think about it at all. In fact, we’ve probably all read stories where it seemed the the author gave the character a talent or skill only because they needed to know how to do something for plot reasons (such as if the author wrote themselves into a corner).

Because of that all-too-common plot-contrivance approach, giving our characters any talents or skills can seem like bad writing. Either those talents or skills are needed oh-so-conveniently by the plot, or they feel like they’re irrelevant and a waste of words.

Is there a middle path? One where our characters can have the additional layers of real-world talents or skills (making them more realistic and relatable) but also manage to sidestep the too-convenient feeling of it being simply a plot necessity, lacking any other connections to the story?

Becca Puglisi, co-author of all those wonderful Thesaurus books and the Writers Helping Writers site (and author of many awesome guest posts here), is here today with her insights on that middle path. She’s sharing five ways our character’s talents and skills can add layers to the story without being just a plot necessity.

When you’re creating a well-rounded and realistic character, there are many factors to consider: their backstory, personality traits, fears, desires…the list goes on. Each is important because it plays a part in defining and fleshing out the character for readers. But there’s another aspect of characterization that authors overlook—one single element that can reveal multiple hidden layers about who your character really is: a talent or skill.

At first blush, this may not make sense. Why does it matter that my character can bake or read people or throw their voice? These are things they do. What does a talent or skill tell people about who they are?

Let’s say your character has been dancing since they could walk and their star is on the rise. They’re an accomplished dancer, sure, but as such, there are certain things you can also infer about their personality:

Many talents and skills can give readers an overview of who the character is personality-wise. Revealing a talent in the story’s opening is a great way of showing this information to the reader instead of telling them. Then it’s just a matter of reinforcing the associated traits as the story goes on.

Potential Layer #2: Other Strengths and Abilities

Not only can a talent reveal personality, it can also hint at other aptitudes that are common or even required for that activity. If your character is skilled at hot-wiring cars, for instance, they’re also going to be good with their hands, have knowledge of wiring and how electronics work, and be adept at blending in and avoiding notice. They might be mechanically minded overall, and this specific talent is just one piece of their skillset.

Knowing how other abilities coincide with a talent or skill can give you realistic ideas of what else the character might be able to do and how those aptitudes could play into your story.

How the character uses their talent can tell you something about their moral code and belief system. White hat hackers, humane hunters, and serial killers who only prey on people who have caused great harm—these are examples of characters using their skills in ways that hint at deeper values. When it comes to using skills to characterize, the how and why can matter even more than the what.

Speaking of why…the reason your character chooses to pursue an activity can provide valuable insight into what’s driving them. Sometimes it’s as simple as them enjoying that hobby or reveling in something they’re good at. But the reasons often go deeper.

Let’s say your character is a gifted boxer. A passion or aptitude for the sport is only one of many reasons she may have taken it up. Consider the following possibilities:

The reasons behind your character’s pursuit of a talent or skill can reveal a lot about their fears, wounding events, healthy and unhealthy coping mechanisms, and motivations. But those connections only work if you’ve taken the time to understand who your character is, why they are that way, and how a skill ties into their history.

Talents can also give you an indication of your character’s people skills. Someone with a knack for manipulation, mentalism, or making friends is going to be good with people. They’re able to read others and know what to say or do to gain their trust.

On the other hand, a character who spends the majority of their time alone and has turned fishing or gaming into an art form, may be more comfortable on their own than with others. This information can give readers a hint about whether your character is an introvert or extrovert, as well as their level of social aptitude.

Readers won’t be able to figure this out for sure from just a talent or skill. But combine it with personality traits, how they choose to spend their time, and a glimpse into their interactions with others, and the audience will be able to put the pieces together.

A talent or skill can provide a window into who the character is. It’s also a natural vehicle for showing, which allows you to reveal important information with an economy of words. Now it’s just a matter of figuring out which abilities make the most sense for your character.

Get Help with One Stop for Writers

Becca Puglisi is an international speaker, writing coach, and bestselling author of The Emotion Thesaurus and other resources for writers. Her books have sold over 800,000 copies and are available in multiple languages, are sourced by US universities, and are used by novelists, screenwriters, editors, and psychologists around the world.

She is passionate about learning and sharing her knowledge with others through her Writers Helping Writers blog and via One Stop For Writers—a powerhouse online resource for authors that’s home to the Character Builder and Storyteller’s Roadmap tools.

Thank you, Becca! I love this post because it’s such a great reminder of some of the ways we can create layered characters.

As you said, talents and skills are often overlooked (possibly because we’ve seen them used badly in stories), but you gave us several approaches that avoid those traps of bad writing. But even more than just avoiding “bad writing,” your suggestions are great methods for having those talents and skills add to our story.

For a couple of personal examples… In my story Pure Sacrifice, the heroine is an artist. That fact doesn’t have anything to do with the plot, but it does affect how she sees the world, such as doodling while thinking through problems. Or in Stone-Cold Heart, the hero is an artistic blacksmith, and he thinks through the steps of a blacksmithing project when trying to distract himself from the heroine.

So I absolutely agree that we can make our character’s talents and skills an important layer to our story, even if they’re not important to the plot. And every layer we add to our characters and our story helps make it more engaging and relatable for readers. *smile*

Have you seen stories with the too-convenient style of talents or skills before? What could the author have done differently? Have you written characters with talents or skills that didn’t play into the plot before? Were you able to make those talents or skills add to the story, and if so, how? Does this post give you other ideas? Becca wants to know: What other hidden elements of characterization can a talent or skill reveal?

[…] Character Traits & Skills: Beyond the Superficial by Becca Puglisi via Jami Gold […]