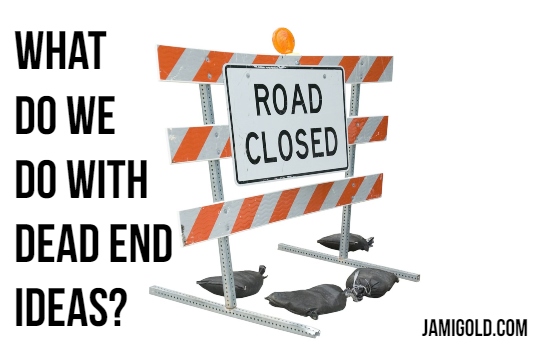 As writers, we all take wrong turns sometimes. That fact holds true no matter how much experience we gain.

We might draft a scene one way, only to get stuck and need to start over. We might draft the beginning and then abandon a new story idea that isn’t as strong as we hoped. We might try one agent or editor or publisher, and then figure out they weren’t quite what we were looking for in a publishing partner.

Once we’re published, we might take wrong turns on marketing and advertising strategies with attempts that don’t capture potential readers’ interest. We might relaunch a series with new covers and blurbs, only for the rebranding to result in sales even worse than before. We might pivot to a different genre or series premise that doesn’t pan out. And so on.

Those wrong turns happen to everyone and to every organization. So mistakes are not a reflection on us or our choices.

All of those dead ends can be depressing. The attempts consume precious resources like our time and/or our money.

Some give up rather than try to push on or figure out what went wrong to fix it or avoid it in the future. There’s no wrong answer when we simply don’t have the energy or ability to continue, but we also know that those who succeed are the ones who didn’t give up completely.

Just like our characters, turning points can change the direction of our life, which means we can’t predict what will happen next—an improvement or a slide further downhill. That uncertainty adds another layer of difficulty that we could see as good news or bad news. *smile*

No One Is Immune

Personally, I find comfort in the fact that—as I said above—everyone and every organization take wrong turns. Dead ends aren’t a reflection on me, but just a fact that we can’t control for most variables in life and the real world.

We see the same wrong turns, mistakes, and dead ends from large organizations and companies. A university near me went from being non-profit, to for-profit, and then back to non-profit over the last decade—a major course reversal due to a dead end decision.

Taking a wrong turn in our writing or career means that we're learning and experimenting, and that's a good thing Click To TweetGoogle, which has endless resources to throw at attempts, has had to backtrack too. I’ve posted here before about the death of several Google services that might have affected us as authors/bloggers, like Google Reader, Google Friend Connect, and Feedburner. Other dead products that might have been relevant to us include Google Authorship and Google+.

In fact, the Google obituary list is so long that not one but two sites act as graveyard (The Google Cemetery and Killed By Google). Yet that list is long because they’ve been so open to new ideas, taking risks, and innovating.

That brings up the bright side to all that failure. As Google’s history illustrates, dead ends are proof that we’re trying and experimenting, and that’s a good thing. *grin*

For authors, Amazon is the 800-pound gorilla that dictates and overwhelms competition. Yet even they don’t successfully take over every market they enter.

They experimented with Kindle Worlds, where they published stories that were essentially semi-official fan fiction with the permission of the original author. Last year, Amazon shut down that experiment, which resulted in confusion for the involved authors on all sides.

So it was to no one’s surprise that just this past week, Amazon announced the cancellation of a service that most people had never heard of. Kindle Publishing for Blogs was designed to turn Kindles into blog readers, by pushing the content of publishers’ blogs to readers’ Kindle account.

“Kindle Publishing for Blogs? Never Heard of It”

I’d actually heard about Kindle Publishing for Blogs years ago and set up my blog on the system back in 2012. Then I mostly forgot about it, which means I never updated the description. (In my defense, the platform was among the walking dead for a while, and I couldn’t figure out how to re-access my account to update the information.)

What do we have in common with big companies like Google and Amazon? We all take wrong turns down a dead end sometimes... Click To TweetLike how Kindle books have a default minimum price of $0.99, the default price of published blogs was $0.99 a month, and yes, I actually had subscribers who would pay money to receive my blog on their Kindle. (Now that I think about it, those subscribers were the first publishing income I made in this career. *grin*)

But as I mentioned, most people had never heard of it, and honestly, for most people, Kindles wouldn’t be a preferred reading platform for blogs. Especially as more websites included mobile-friendly formatting and blog content became more enhanced with larger images, gifs, embedded videos and social media posts, etc., Kindles just didn’t have the ability to deliver compared to other non-desktop options.

Still, I think the shutdown is a reminder of two things:

So go, experiment and make mistakes. Try and fail and try again. Every dead end is proof that we’re still making the attempt rather than just sleepwalking through life.

Staying still can be its own form of a dead end that leaves us stuck when the market changes around us. And even if things don’t work out and we need to reverse course, we can know that we’re in good company. *smile*

Have you tried and failed something in your writing career? What was it? Are you still trying new things anyway? Have you had some attempts succeed? Had you ever heard of Kindle Publishing for Blogs?

Hi Jami!
I had never heard of Kindle Publishing for Blogs, nor a lot of the Google ones. This blog post is perfect advice for me right now! I recently, finally, told myself it was okay to let go of wanting to publish my science fiction romances and try writing something new. And it felt freeing. So much so that when I began writing a light-hearted contemporary romance, suddenly I’m finishing 5,000 words a day when before, I was struggling to edit/write 500. And now, instead of feeling the strange hesitancy I always felt when thinking about publishing my sci-fi stories, I feel excited and happy to try and share this one. So, thanks for writing about this. <3

Omg! I would have loved Kindle Publishing for Blogs. 😭 Alas. I actually fantasized about reading websites and blogs on my Kindle, so that my eyes would feel more comfortable— I still struggle with eye strain problems. So I’m sad to hear that this service has died before I had even heard of it. :'( Amen to trying new things with our writing and publishing. I don’t have much publishing experience, but I’m upset with some aspects of my one and only self-published book. The good thing is that I’ve tried, and now I know what things to do differently next time. As for writing, recently I’ve been allowing myself to write melodramatic, cheesy, cliche, exaggerated, ridiculous, silly, illogical, irrational, or generally outrageous stuff. NOBODY needs to see it. One blogger pointed out that many writers write with the belief that everything they work on must be shown to readers. But actually, you are totally allowed to write things that you keep to yourself. We’re allowed to keep secrets too, lol. I’ve found this experience of not censoring my writing very freeing, and I really enjoy the self-expression and self-discovery I’m getting out of this. Plus, we don’t always need to struggle with the pleasing myself vs pleasing others dilemma. We can simply keep the original copy for ourselves, and create a separate version for readers. (The version for readers may even be vastly different in plot and style, lol.) So I keep repeating this to myself: Nobody needs to…  — Read More »