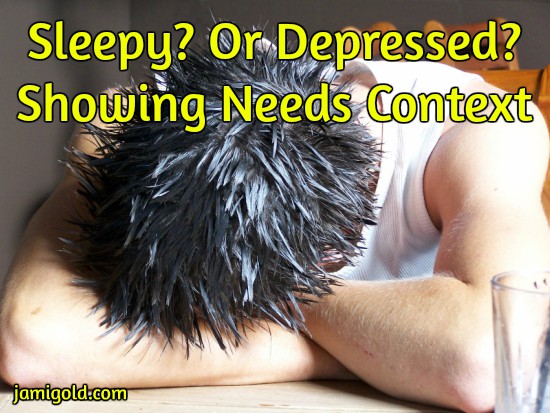 Yesterday was another one of those days. As I mentioned last time, our cat is sick, and our vet thinks she probably has cancer. On a family project, several years of planning got tossed for different approach. My computer crashed, and I lost everything I was working on. Oh, and I discovered two scorpions in the house. *weeps*

In related news, my burnout is worse than ever. But at least I found a great article to share with you this week. *grin*

Last week, I wrote about how the advice to “show, don’t tell” is often applied inappropriately. Too often, the implication is that showing is “better” than telling—and thus we should avoid telling—when the truth is that our story needs both.

We’re going to continue that conversation today with another perspective. Lisa Cron, author of the book Wired for Story, inspired James P. Barker’s insights in a post about what “show, don’t tell” really means when it comes to storytelling.

Many times, authors think the key to improving their story is to tighten word flow, strengthen verbs, etc. However, while writing craft does need us to pay attention to all that, story craft is about creating something with meaning.

I could go on, but I hope the point is clear. The most vivid, active showing of a scene won’t matter to readers if the events don’t serve a purpose in our story.

No matter the beauty of our writing or the care we use in fully showing a scene, the descriptions will still be an information dump if there’s not a point to it all. On the other hand, if there’s a purpose behind every story element, readers will be engaged because our words will have meaning.

The most important element for giving meaning to everything else in our story is context. I’ve mentioned context before in relation to how we draw readers into our story on page one, but context is important throughout our story.

If readers don’t understand the context, the stakes won’t seem bad at all, the characters’ actions won’t make any sense, and the subtext will just lead to confusion (or be missed entirely).

As I mentioned in that post last week about worldbuilding, telling lurks everywhere. The best writing isn’t about avoiding telling. Rather, we have to find the right balance of telling and showing to provide context.

His post starts off with this quote by Lisa Cron (bold emphasis added):

Showing anything in a scene won’t engage the reader—no matter the strength of our writing—if it has no meaning within the story. As James says in his post:

“In the realm of storytelling, everything is about set ups (cause) and pay offs (effect), including emotions.

Showing someone crying over the death of another isn’t enough; we must have an understanding of what the deceased meant to the other in order for us to feel and derive meaning ourselves.  In other words, it’s the set up that provides context for the pay off. … We must have a context to give them meaning…”

Engaging readers’ emotions is often about ensuring they know why something is so important, hurtful, funny, etc. to the characters.

Not Enough Context? Melodrama or Flat

Have you ever read an excerpt of what’s supposed to be phenomenal writing and had it strike you as melodramatic or flat? (I don’t know about you, but many examples in workshops or blog posts about how to show emotion just seem over-the-top to me.)

The reason is because if we’re not familiar with all the context—all the background information for the characters, scene, and situation—all those beautifully worded details don’t matter. Showing needs context to be powerful.

Too Much Context? The Bad Kind of Telling

On the other hand, if we’ve been doing a good job of providing that context to readers all along—if they know why an event would make a character sad, upset, or happy—we won’t need to tell them a thing.

The right story context determines how well our telling and showing works Click To TweetReaders won’t need a telling hint of what a potentially vague and confusing body language cue is about. If readers have been on the character’s emotional journey, they’ll know why the character is crossing their arms or sighing or whatever.

Is it belligerence or insecurity? Is it wistfulness or exasperation?

Readers will know if they have the context from being a part of the character’s experience. In fact, giving them another hint like the bold here—”John sighed, wishing he could get what he wanted. Just once.“—is more likely to be the bad kind of telling. It can be repetitive to what they already know and slow down the narrative pace.

“While it’s important to show the effects of sadness (e.g. “crying”), where many writers struggle is writing in a way that conveys, with clarity, the emotions of a character dramatically. Instead, they’ll often resort to a line such as “George wipes his face, dismayed.” The word “dismayed” ends up being our cheat sheet to the reader as to how the character feels internally, but in reality, it should be self-explanatory via the action taken (George wipes his face), depending on the context (set up).”

As I said last week, the difference between showing and telling isn’t about one being “better” than the other. Along the journey of our story, we often might need to include a telling word or phrase to provide that context readers need.

How well we include context determines the right balance of showing or telling for our story. Empathy—readers fully understanding the meaning of events through context—allows our showing to shine. *smile*

So sorry you’re going through all that, Jami! My laptop got turned into a brick by the latest Windows update this morning, so I relate to the computer issues. I hope your kitty will be okay!

Hey Jami, I love this idea of context (whether through telling, showing, or a mix) to clarify and make emotional meaning for the reader. Lol, thank you for voicing my thoughts that many examples of “showing” sound melodramatic or trite! I think many of us are too shy or polite to admit that out loud. For this example: John sighed, wishing he could get what he wanted. Just once. Well, in my personal opinion as a reader, I’m quite okay with that. Maybe because I’m used to seeing this style with lots of internal monologue. Or did you mean that the character has expressed this opinion several times before? If so, then yeah, that would be repetitive. For this: George wipes his face, dismayed. I don’t know if this is again a case of me being a reader in the minority, lol, but I don’t have a problem with this style either. In fact, I find that as a reader, I click most with books where they do BOTH telling and showing of emotions. Recently, I’ve been copying down action beats from books I like. Alessandra Hazard is one of my favorite gay romance authors, and I’ve always found her character interactions exceptionally vivid and pithy. After copying down a number of her character action beats, I noticed that she does a lot of body language AND emotion words (nouns, adverbs, and adjectives!). She uses tons of internal monologue too, which I love. Here are a number of action beats/…  — Read More »

Sorry to hear about all your difficulties, Jami – sending blessings.

Lisa’s post is timely as I’ve just written a piece that fails on ‘context’ so now I know how to work with it and other pieces – many thanks.

Sorry to hear about your cat. The diagnosis is not always correct but if you have got to that stage she is undergoing something serious. I hope she can be helped. If not I recommend making her comfortable near you and letting her go in her own time.

Hi Jami, I’m so sorry to hear things are still going so rough. I have always enjoyed your blog and am happy you have not given it up completely. Hang in there. Change is one of the “inevitables” of life. This season cannot last forever. I will pray for you for healing, restoration, peace, and joy.