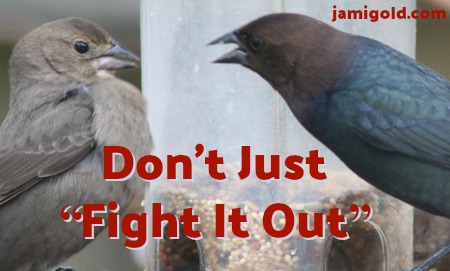 For the past couple of weeks, we’ve had a conversation here about antagonists with a series of guest posts from Kristen Lamb. One insight Kristen shared is that antagonists act as the engine of our story, providing the conflict that keeps tension high and our pacing strong.

Yet as Kristen said, as humans, we tend not to like conflict in real life. Unfortunately, that leads many writers to minimize the conflict in their stories, even though “good fiction is the path of greatest resistance.”

In a perfect bit of serendipity, today’s guest post (which was scheduled over a month ago!) addresses the most common myth about conflict. *grin* Janice Hardy is another one of my favorite people, and she has a fantastic blog for writers, so I’m excited to share her thoughts on this topic which fits in so well with the antagonist information we’ve been absorbing lately.

As the antagonist series has pointed out, antagonists are not necessarily “bad guys,” but all those working toward different goals from our protagonist. This understanding of antagonists is vital to understanding conflict, and today’s post by Janice explains how we can tell whether we’ve included the right kind of conflict in our stories.

Conflict is a tricky thing. It’s vital to stories, and used all the time by writers everywhere, but it’s one of the more misunderstood elements of writing out there.

It’s a pain in the butt that makes us want to bash our heads against our keyboards on a regular basis, and even makes us want to curl up and cry in the corner. I’ve been there myself, so I know how frustrating it can be (which is why I wrote a book to help my fellow writers avoid some of that frustration and keyboard-bashing).

Creating conflict isn’t that hard once you figure out what it means and how it applies to your novel. Realizing it isn’t a one-size-fits-all means you’ll be able to find the right conflict to suit your need, no matter what that need is. You’ll know how to parse feedback and how to diagnose your own manuscripts to spot trouble areas before they become problems.

The most common misconception about conflict is that it means fighting.

Writers throw battles they don’t need into a story, cause animosity between characters for no reason, and have characters behave antagonistically just to cause trouble—all because someone told them they “needed more conflict.” To these writers, conflict is an actual fight—anything from an argument to a full-scale battle.

Why doesn't Conflict = Fights? Conflict is about STRUGGLE not just “winning.” Click To TweetNot only does this limit available plot options, it creates a boring story, because nothing ever happens in the book but people fighting.

Even worse, repeated fights seldom have true conflict, because there’s no struggle to do anything aside from “win.” Take out the fights, and nothing really changes but the time it takes to get to the novel’s climax.

What Are Some Other Types of Conflict?

Conflict isn’t always violent, nor should it be. Some of the most gut-wrenching conflicts come from people who care about each other who are facing impossible choices.

A fight could be the result of these conflicts, but it’s not the cause.

How Can We Tell the Difference between Fights and Struggles?

If you’re concerned your conflict is more fight than struggle, look at your scene and ask the following questions:

Fights that happen out of the blue or without cause (aside from “now the bad guys attack” type fights), are often conflict-free because the protagonist did nothing to start the fight. It happened to her, not because of anything she did.

But remember—the choice doesn’t have to be as direct as, “Do I get into this fight or not?” It can be the result of a decision made at an earlier time.

For example, deciding to go out with friends instead of staying home with a sick spouse could easily result in a fight upon return. Knowing a fight is coming and deciding to act anyway is a form of choosing that leads to conflict.

#2: Is There a Repercussion to Winning or Losing the Fight?

If the result is the same regardless of the outcome of the fight, it’s not a conflict. Conflicts have repercussions, otherwise choosing a path wouldn’t be an issue.

The schoolyard bully who beats up three kids a day at lunch faces no conflicts. He wants to bully, he bullies without consequence or care. It isn’t until someone says no that conflict comes into play.

#3: Does the Fight Cause Emotional or Personal Distress in the Protagonist?

People argue and get over it all the time. It might stink while the fight is happening, but it leaves no real scars or emotional distress. No one reconsiders their views, or changes their tactics, they just let off steam.

Arguments can be useful tools is showing two sides of an issue, but if you want it to be the scene’s conflict, make sure the debate creates a change in how the protagonist views that situation.

Not all conflicts are deeply emotional—sometimes, the point of the conflict is to be smarter than the other side.

But fights with no challenges aren’t about being smarter or figuring out a puzzle, they’re about showing action for the sake of action. Sometimes we want to show that action to establish a protagonist’s skill (which is fine), just don’t mistake this for the conflict in the scene.

How can we tell if a scene contains a meaningless fight or a real conflict? Click To TweetThere’s nothing wrong with having a fight here and there or a battle that needs to be won in your novel. It’s only a problem when every conflict is two sides fighting it out, because constant fighting rarely results in forward plot momentum.

Nothing changes, so the story never advances and readers never learn anything new. Stagnation will kill a story fast.

Give your characters struggles and challenges to face, and you’ll create stronger conflicts that matters to both characters and readers. 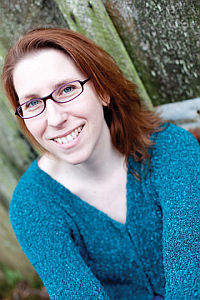 Janice Hardy is the award-winning author of the fantasy trilogy, The Healing Wars, and multiple books on writing, including Understanding Show, Don’t Tell (And Really Getting It, Planning Your Novel: Ideas and Structure and Revising Your Novel: First Draft to Finished Draft.

She’s also the founder of the writing site, Fiction University. For more advice and helpful writing tips, visit her at www.fiction-university.com or @Janice_Hardy.

Looking for more tips on creating conflict? Check out Janice’s latest book Understanding Conflict (And What It Really Means), an in-depth guide on how to create conflict in your fiction: 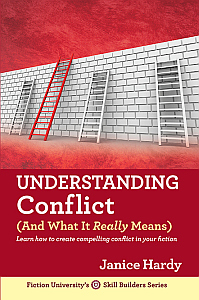 Do you struggle with creating conflict in your novel?
You don’t have to.

With in-depth analysis and easy-to-understand examples, Understanding Conflict (And What It Really Means) looks at how to develop and create conflict in your novel. It also explores the things that affect conflict (such as tension), and the misconceptions that confuse and frustrate so many writers.

This book will help you:

More than just advice on what to do and what not to do—it’s a down and dirty road map to how conflict works, designed to help you create the right conflict for whatever genre you’re writing. By the end of this book, you’ll have a solid understanding of what conflict means and the ability to use it to craft strong and compelling fiction.

Thank you, Janice! I love your four tips for how to identify genuine conflict. Arguing just for the sake of arguing isn’t healthy in real life or in our stories. *grin*

When we first start writing, we might have to retrain ourselves to interpret common words differently. What non-writers mean by conflict can be different from what we mean in a writing situation, such as with the advice: “Include conflict on every page.” And information that clears up misinterpretations helps all writers.

Rather than sniping, arguing, or fighting, conflict in writing can happen in any and every situation. All we need to create conflict are other characters or circumstances that stand in the way of the protagonist’s goals—from a toddler who doesn’t want to take her nap when Daddy says so to a big bad villain trying to kill our hero (and everything in between). *smile*

Do you struggle to include conflict in your writing? Are some types of conflict easier for you to write than others? Have you read stories with false or meaningless conflict? Do you think these 4 tips will be helpful? What are your thoughts on fighting as a tool for conflict?

Thanks for having me, Jami! It’s always a treat to visit 🙂

Thanks, I enjoyed the read. Agreed that a thriller-style plot of taking on opponent after opponent on the way to confront the evildoer is merely a delaying tactic.
Romances do sometimes stretch out the story by repeated arguments but they tend to feel very repetitive and are an invitation to skip pages.

Exactly. None of those things are bad, and can be great parts of the story, but it’s better to mix things up.

[…] Conflict: Why It Isn’t Just About Fighting by Janice Hardy via Jami Gold […]

This happened a lot in a “summer smash hit thriller” I read recently, and while I couldn’t put my finger on the problem at the time, you hit the nail on the head with this post, Janice. Most of the “conflict” in the story didn’t advance the plot at all, because the protagonist wasn’t changed by it and neither was the inevitable conclusion. I’ll have to watch for this in my own writing; thanks for the tip!

Most welcome! Thanks for a great real world example of how this can trip up a writer 🙂 I’m glad you figured out how to get past it.

Hey Janice, I know I’m commenting very late, but I hope you’ll see this anyway, haha. I found this post especially interesting, because I just finished writing my final paper for my couples’ therapy course. In this paper, we had to imagine how therapy would go for either a real-life or fictional couple. As a writer, I used my own story characters, and wrote tons of dialogues with them and the therapist. There is this intervention in couples’ therapy called “Dreams Within Conflict.” This is when couples have a big disagreement on something due to fundamental personality, philosophy, value, or belief differences between the partners, and this disagreement creates a lot of tension and unhappiness (maybe even bitterness) between them. In this intervention, you have the partners take turns being the speaker and the listener. The speaker talks about their perspective, beliefs, values, feelings, etc., and the listener cannot interrupt, unless they are expressing empathy or understanding, or asking an open-ended question to explore their partner’s point-of-view further. This is so that the speaker gets the chance to air their story without being judged or interrupted. At the same time, the speaker cannot criticize or blame their partner, but should focus on talking about their own needs and feelings (“I” statements rather than “You” statements), and think about positive needs—what they need, not what they don’t need from their partner. The speaker may talk about family histories or backstories to explain why they feel or believe a certain thing. After…  — Read More »