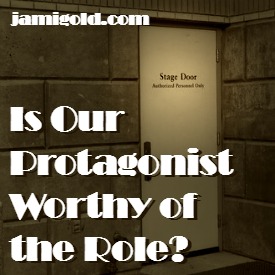 We won’t delve into that debate here. *smile* But by default, the protagonist is defined as the main character, the hero, the lead—the character driving the story forward.

In fact, a common complaint by editors and agents is that some submissions feature a too-passive main character, one who reacts to events but doesn’t have agency and take action. In other words, for most stories, the main character is expected to be more than a mere observer.

That said, we might sometimes worry if our main character is strong enough, unique enough, active enough to be worthy of the label protagonist. We might wonder if our story would be better told through another character’s eyes. Or we might debate which of our major characters should be the lead, the one behind the story arc.

Last month, Ella left a comment on one of my older posts asking how we can make sure the main character is acting like a protagonist:

“Even though my MC has the passion and personality and traits to be the main character—there’s no reason for her specifically to be the lead, and someone else could be in that position instead and not much would change. I don’t want to replace her, though, because she *is* unique and would lose a lot if she walked away. Would you mind telling me what I can do, especially since I want it to be a character-driven story?”

Point of View Does Not Indicate Character Importance

Before we dig in, I want to make a couple of points. First, in many genres, the protagonist isn’t the only point of view (POV) character used throughout the story.

Thrillers and mysteries sometime include scenes from the victim or the villain’s POV to increase tension. Romances frequently include POV scenes from each party of the relationship. Character-ensemble stories (from fantasy to family saga) might bounce from one POV character to another—think Game of Thrones.

In a previous post about how many characters is “too many,” I differentiated between protagonists and other major characters with POV scenes:

Just because a character gets POV scenes
doesn’t mean they’re automatically the protagonist
.

Leadership Does Not Indicate Character Importance

Secondly, the wording of Ella’s question alludes to several assumptions we might make about protagonists that we should examine:

I’m not sure what Ella meant by “the lead,” but I want to take the opportunity to clarify that just because a character is our lead character, that doesn’t mean they have to be the leader among a group of characters. Stories sometimes feature a protagonist (lead character) who is a sidekick to a group’s leader, or maybe even an outcast.

So our protagonist needs to be strong enough to lead the reader, but they don’t have to be the leader of others within the story.

It then follows that the plot might not change if a different character leads the group. This isn’t a cause for alarm. *smile* If it doesn’t feel natural for our protagonist to lead a group of characters, we shouldn’t try to force them.

Our story is more than just a collection of external plot events that characters navigate. Our story is about the struggle, and each character’s journey through that struggle is likely to be unique, so a different POV character as the protagonist would change the story, as the journey itself would be different.

Just because a character isn’t a leader
doesn’t mean they’re too weak to drive the story.

How Can We Tell Who the “True” Protagonist Is?

If neither POV or being a leader indicates who the protagonist must be, what factor can we use to determine whether our main character is “strong enough”? How can we figure out whose story is this?

We can ask ourselves:

Great! But all that can sound very external-plot focused, and many stories focus on internal arcs (as Jeff Lyons encouraged in his guest post last month). So while a group of characters might share stakes and consequences and conflicts for an external plot, we might look at these above questions differently for a character-driven story.

For an internal arc, usually the person who changes the most would be the one “driving” the story. Big, end-of-the-world stakes might be driving the group, but this character with the internal arc likely has personal stakes as well, forcing them to change more than the others.

If the story has an internal focus, the concept of drive can also apply to internal change rather than just pushing along external events. So for a character-focused story, where we want a strong internal arc for one of our characters, that character with the internal journey is the protagonist. Automatically.

In those types of stories, the point of the story isn’t about the external events—the plot is there simply to push them to change. Instead, the reason the story exists—the purpose of the story—is to share their struggle and their journey as they learn and grow.

How Can We Strengthen Our Protagonist & Make Them “Worthy”?

Now that we hopefully know our true protagonist, let’s get back to the issue of making sure they’re as strong of a character as they can be. As I mentioned above, they don’t have to be the leader among our characters, but they do need to lead the reader through our story.

This is the reason that we talk about making our characters compelling or likable. Readers usually read to follow the protagonist’s journey, so we need to give them a reason to listen.

How can we make sure our protagonist is a worthy leader for readers to follow?

If readers feel compelled to listen to our protagonist, or they like or care about the protagonist enough to root for them, they’re following our character’s lead. And that’s a worthy trait for our protagonist—no matter what’s going on with the plot. *smile*

Have you written stories where you worried whether you had the right protagonist? What made you doubt whether they were the right character for the job? How did you finally decide? Or if you haven’t decided yet, does this help? What makes a character feel worthy of the protagonist label to you?

I’ve been dealing with protagonist problems for my WIP. She is a 40+year old mother. Many critique partners want to hear the story from her 12 year old daughter’s perspective but I don’t want to go there. So my challenge has been to make sure the protagonist drives the plot, not the daughter. Thanks for the tips!

Jeff Lyons post was excellent and gave me a lot to get my head around. Most of what I write does not have a moral premise. Your checklist is also thought provoking. Our main protagonist needs to be someone the reader wants to follow.

After reading this post, it is obvious that I need to work on setbacks for my protagonist. I have her starting out with one big setback but then things keep going her way despite the conflicts. Thanks for the pointers.

Lol, when looking at my Chinese story, only my villain or his son would fit the name of “protagonist”!! Which means my current “hero and heroine” are the antagonists, lol, let evil prevail…Just kidding. My villain and his son don’t actually make an appearance until the last part of my story, though they’ve all heard of the villain’s name near the beginning. But seriously, my villain and his son are the only ones who go through a legit, 180° character change arc that’s also tied to the main story.

Hmm, in the past, I would worry about this, but now, I’m not worried. I’ve accepted that this is probably just a different type of story (not superior or inferior, just different). And I don’t want to give the villain most of the screen time either, because I derive most of my enjoyment from watching the good guys interact with each other because they’re so cute and happy. I think the main attraction of my story is the happiness, humor, and friendships between the “good guys.” Maybe others don’t feel this way, but I’m exposed to way too much sadness and fear in my real life, that I really relish reading very optimistic and cheerful stories that also make me laugh!

I’m pretty sure many will disagree with me, but that’s how I think about this particular story!

Thanks. Yes, the external arc and internal arc are good ways to establish who has grown and led the story.

[…] stories would be nothing without them. Jami Gold defines who the protagonist is in a story, Alison Green Myers discusses character development through music, ESL Drummer takes the […]

[…] decide on the right protagonist to drive the story […]

[…] our plot is meant to reveal our character (how they respond to obstacles, etc.), then in a way, our characters reveal the story. Our story’s themes and the messages behind the struggle are all exposed by our […]