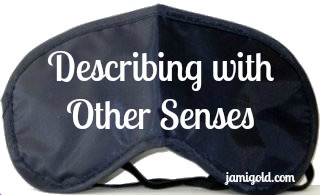 How many hundreds of times have we all heard the advice to “show not tell”? That’s often good advice (except for the times when it’s not *smile*).

Other than the exceptions, “showing” usually is better than telling because it pulls the reader deeper into the story. But that means we need to figure out how to show, and that can be a trickier step.

I’ve gushed many times about The Emotion Thesaurus by Angela Ackerman and Becca Puglisi. One reason I love the ET so much is that its listings of physical, internal, and mental responses for different emotions help me expand my “showing” vocabulary for descriptions.

Just as we can have emotional response “crutches,” like too many smiles or nods or characters expressing anger the same way, we can also have crutches in how we show story elements, like including only visual cues when describing a setting. Expanding our “showing” vocabulary can help with all of our crutches, so let’s take a look at how we can use our other senses to improve our descriptions.

Our Default Senses Can Be Limiting

Like many, I’m a visually oriented person, so my first instinct is to use visual cues and describe people or settings with the sense of sight. My next most commonly used sense for descriptions is sound.

The remaining senses of touch, smell, and taste can be hard to include in our stories. I’ve definitely improved over the years, but describing with these senses doesn’t come as naturally to me.

When I succeed, I have to admit the scenes often have a stronger feeling of “you are there,” so I always look for ways to improve the variety of my descriptions. Getting me to think beyond just “sight”—or beyond the basic five senses at all—is one way the ET helps me expand my descriptions.

Yes, some of the Physical Signals the ET lists are visual (“hunched shoulders”), but it also includes auditory (“letting out an uncontrolled moan”), tactile (“fiddling with jewelry or other items”), and a few are behavioral (“a smirk or eye roll”). In addition, most of the Internal Sensations are visceral (“tightness in the chest”), and the Mental Responses are all internal (“negative thoughts”).

That variety helps us tap into various senses and ways of showing our characters’ emotions and actions. But let’s see if we can think of other ways to expand our senses.

Introducing the Other “Senses”

At a workshop I attended several years ago, Marilyn Kelly talked about senses beyond the basic five, such as pain, balance, temperature, etc. (She even has a book called Eleven Senses—Who Knew?)

Other senses are scientifically recognized, and they’re all ways our characters interact with and respond to their environment. For each scene, we want to check in with our characters and see which senses apply to their situation.

What are they aware of? Are they comfortable, uncomfortable, reacting, acting, etc.? And most importantly, how do our characters feel about that?

We don’t want to just add in lots of pointless description. That’s no better than an information dump and would slow down our story’s pace.

Instead, we want to reveal how any sensory details matter to the characters. Or we can use descriptions to add subtext, especially when the character says one thing but their response to the situation exposes a different reaction.

“The senses are of little impact if we don’t translate them into Emotions.”

Using the Other “Senses” for Descriptions

When we keep all of the senses in mind for our writing, we can tap into a broader array of descriptions. I’m going to share some examples to get us started on non-visual descriptions, but feel free to add more in the comments!

For example, we can describe settings or characters in non-visual ways by:

Touch: Sense of Comfort or Warning

Pain: Awareness of Skin, Joints and Bones, and Organs

Temperature: Hot and Cold (and Humidity)

Time Passage: Perception of the Passage of Time

We’re often told to include more senses—especially more than just sight—but that can be difficult. After all, how often do our characters go around tasting things? *grin*

Instead, if we think of all of these senses, we’ll usually be able to include something other than only visual cues in each scene. Even with vision, we can add in unusual details like how well a character sees at night or their nearsightedness.

But this isn’t necessarily something else to stress about during drafting. Many of us write lean first drafts and add in layers later. Fleshing out our descriptions in revisions works just as well. As long as we’re adding senses at some point, our stories will be better for the sensory information.

If we expand the ways we experience scenes through our characters, we’ll be more likely to notice non-visual details to include in our descriptions. These other senses all add up to a stronger “you are there” feeling for the reader, and that’s really the ultimate goal of “showing not telling.” *smile*

Just when I realize that I don’t make effective use of five senses, now I have to try for eleven!? Actually, I am grateful for the lesson, now to learn and apply. Thanks for the education.
David

LOL! We certainly don’t have to aim for using every one of these. 🙂

However, I’ve found it helpful–when I’m layering in senses during editing and get stuck because none of the other “big 5” apply–to remind myself of these other options. Layering in these other senses can enrich our writing just as much as using the “big 5.” Think of it as adding more options to your toolbox. 😉 Thanks for the comment!

I’m weak in getting them into the story. Seems to be a function of being a pantser. So I have to work at it to get it in during the first draft. 🙂

A book that really helped me was Describing the Senses, which has exercises that focus on the emotional side of the senses. Generally, writing exercises tend to focus on writing sentences and not connecting it to anything, so this was a different approach. One of the exercises included coming up with different words to describe water than “crashing” or other traditional words. Be warned though: I went to a bay on a river and wrote down on the sounds as practice and a guy stopped me because he was wondering what I was writing!

Also helpful to have a simple goal of making sure something gets into the story. For the one I’m working on now, it’s the temperature.

You can also use the highlighter in your word processing document to color code the different senses. It’ll tell you if you’re overbalanced, or, like me, leaving too much out.

As a fellow pantser, I can say that I also struggle to include these in the first draft. If I’m in really deep POV mode, I can pick up on other senses, but my default is definitely to stick to visual. That’s why I do posts like this–I’ve had to learn to add these in editing, so I figure to share what I’ve learned. 😀

Ooo, great tips! I don’t see that book available anywhere, so maybe it’s out of print? Or maybe I’m looking for the wrong title/author. The other tips more than make up for that missing piece though. 🙂 Thanks so much for sharing!

Sorry — should be Writing the Senses. It’s brand new, just out.

Ah-ha! Here it is–Writing the Senses by Laura Deutsch. Thanks for sharing! 🙂

Hi Jami, great post ty. A little while ago I took a course with Mary Buckham on the use of senses in our scenes. I learned so much from her, for example depending on POV the same room will seem different because each person will pick up on different cues. I think she helped my writing to come alive on the page, highly recommend her course

Ooo, yes, Mary’s fabulous. I met her at an in-person workshop at our regional conference a couple of months ago. 🙂

As you said, the point of view of our character will affect our descriptions a lot. Thanks for sharing your insights and for the comment!

Elen Grey | Deep in B-ville Writing Over the Garage

This is an excellent post, Jami. I’m bookmarking it for future reference.

You’ve given me some ideas that I hadn’t given much thought to before. I try to describe things in my stories so that the reader feels like he/she is right there. I’ve neglected smell and touch completely though. Thank you for the lesson.

You’re welcome! I often write these posts to remind me of the lesson too. 🙂 Thanks for the comment!

Jami, I’m with you on the Emotion Thesaurus. It’s a MUST for me in later drafts to “add more fleas,” as my agent likes to call it. I’m so guilty of using the first things that come to mind and having to change them later. I mean really, how many times do they have to roll their eyes?

LOL! at the “fleas.” Yes, I think we can all be guilty of going for the easy at first. That’s why editing is so important. 🙂 Thanks for the comment!

Thanks so much for this highly informative post. I’ve got it in my craft binder. I can’t begin to tell you the many ways in which you’ve helped my writing.

Aww, thank you so much for the kind words! *blush* I’m happy to help. 🙂 Thanks for the comment!

[…] tools to hook your reader in that all-important first page. On any page, Jami Gold encourages us to use ALL the senses to improve description and deepen the story, and when you’re done writing, use these 6 ways to balance your editing […]

[…] Sense of motion:  I just randomly picked this as an element to play with in the story.  A lot of times, something I see that week influences me, like Jami Gold’s post on the senses. […]

[…] Other Senses: She stumbled in her heels, and the artfully arranged braid keeping her hair under control shifted dangerously on the crown of her head. (Read more about using other senses.) […]

How to Get Our Thoughts onto the Page | Jami Gold, Paranormal Author

[…] use sensory details and descriptions (to put readers in their shoes) […]

[…] incorporate other senses beyond the basic five […]